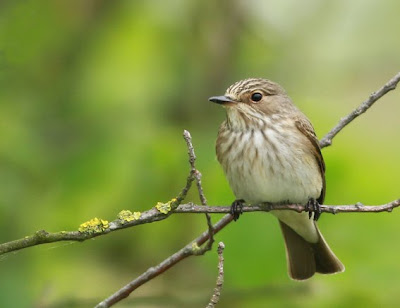 Spotted Flycatcher in The Plantation, Blakeney Point.
Arrived at Cley Coastguards and started walking Blakeney Point at 11.15am. Overcast day, but no rain.

I was rewarded with very little, in fact I didn't even see a wheatear until I got to 'The Hood'! My lunch break at 'Halfway House' was not to be – people were staying in the house. There were also 50+ very noisy, life jacketed people on a tour round the Point. I worked hard and covered just about everywhere – went round 'The Hood', walked 'Yankee Ridge', crossed creeks, muddied boots and all I saw were a few wheatears, linnets, reed buntings and hedgesparrows. It was very disheartening to keep hearing messages about a Red-spotted Bluethroat and Red-backed Shrike at Stiffkey, Hoopoe somewhere else, Night Heron at Ranworth and then later another fem Bluethroat at North Hide, Cley etc etc! But hey ho, I plodded on and hoped. I saw a Small Copper amongst the Thrift and Sea Campion. Lots of terns and swallows flying through.

The Plantation
My reward was a beautiful Spotted Flycatcher who was a joy to watch. A photographer's dream – I had this bird all to myself! Got some cracking shots of this bird sitting on dead tree trunk and on a branch surrounded by very green sycamore leaves. The sun even broke through the clouds for a short while! Several chiffchaffs in here too and also linnets. Also of note, quite a few bumble bees. Birdsfoot Trefoil was out in flower. I went and sat at 'The Lupins' but this only produced linnets and meadow pipits. I spent a couple of hours at 'The Plantation' having a late lunch at 2.40pm and hoped that something more exciting would drop in! 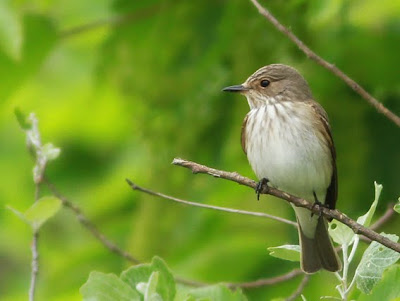 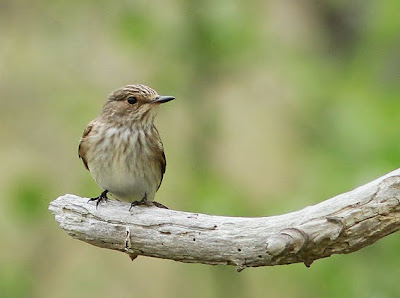 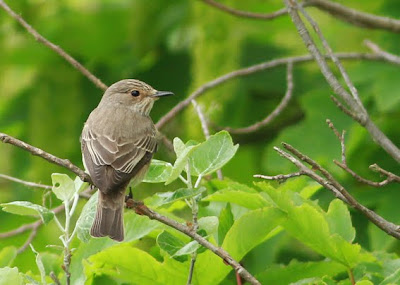 
Near Point
A second Spotted Flycatcher was seen, as I bumped into Eddie Stebbings (Warden). Eddie said 'they had had 3/4 Spotted Flycatchers today, but nothing else really of note. We watched a male Kestrel carrying a small bird, which then landed a short distance away and settled down to eat its prey. I walked east to the basin area of small sueda bushes and found more linnets and meadow pipits – no bluethroats here! Crossed over the dunes and went back to 'The Plantation' to watch the Spotted Flycatcher and Chiffchaffs again. One of the staff from the Lifeboat House had just seen a Short-eared Owl, but I didn't see this on the way back. I left 'The Plantation' at 6pm.

On the way back I followed the sueda bushes the whole stretch and also walked all around 'The Hood' again – surely I would something? A few more wheatears and that was it! As Coastguards came into view, I realised that I might be in with a slim chance of seeing the Female Bluethroat that had appeared on the RBA website (via iphone) earlier. Also thank you to my friends who have sent me updates/messages today.

As I walked into the carpark at about 7.45pm I saw Julian B. who kindly gave me directions where to look for the bird, although sadly he had not seen it. It has been very elusive I hear. I dumped my rucksack in the car, had a quick drink and was just about to start walking when Steve G. turned up and said it was unlikely that I would see it now. I walked to North Hide – what's another half a mile (ish)!!!! As I walked along the grassy path, a birder passed me saying he had seen it briefly from the hide at 7.50pm – brilliant! I speeded up and ran over part of the shingle (don't how I had the energy for this!) Walked in the hide and there were several people in there. Someone directed me to where the Bluethroat was, which I watched with others from 8pm to 8.10pm. It wasn't exactly awesome views and it wasn't even worth lifting the camera up to, as it would have been a brown smudge in the viewfinder, but I had seen it! Nice end to the day.

As I walked back alone, I could see three Spoonbills on 'Billy's Wash' at 8.30pm. Got back to the carpark and had the rest of my sandwiches and coffee and left at 9.15pm. As I drove along Beach Road a Barn Owl sat on a post. Work all day tomorrow, so there will be a spectacular list of birds and probably even a first for Norfolk/Britain!

MORE PHOTOGRAPHS TO BE ADDED
Posted by Penny Clarke at 22:59