I got to bed so late last night after typing my blog, I decided not to set the alarm this morning. Made a wonderful breakfast/brunch consisting of mashed potatoes, 2 fried eggs and baked beans – all within the diet, honest! The next job was to take all my photos off the SLR and copy onto the Mac and then download all my iphone pictures and videos before I ran out of space. I needed to clear this before my little venture today.

A Barred Warbler popped up on the pager at Burnham Overy Staithe – I knew this would happen, it was only a matter of time before someone found one, with so many birders trekking down for the Icterine Warbler, it was bound to happen. Normally I would have gone to see this, but I had made the decision to go and see the fabulous Red-footed Falcon in Lincolnshire – after all it was only an hour away from King's Lynn!

With the sat nav set up, I was off along the boring A17 by mid afternoon and planned to be there for early evening light. I have never taken so many left and right turns and also never driven along so many roller coaster styled roads. Note to self: do not..... under any circumstances put foot on accelerator to reach 60mph+ when you see a long straight road in Lincolnshire.... I nearly took off several times! The postcode on RBA took me past where I wanted to be. I had no idea what I was looking for, so stopped to ask a local lad mending his car, who said 'you want the nature reserve' and duly gave me accurate directions, back the way I had just come from, left opposite a farm over a track/hill into the car park of Willow Tree Fen Nature Reserve. I couldn't believe it – Sue and Steve G. had pulled up, just before me! Also Ian and a couple of other Norfolk birders also there, having already seen the bird and were now leaving.

I presumed (never presume) that it would be a park up and distant scope job, but I was completely wrong. To view the bird, you had to walk a very long way around this massive, but wonderful reserve to get onto the public footpath, which runs along a high bank overlooking the entire reserve. I could see some photographers in the very far distance. I took my scope with me as well as the SLR as I guessed I would be phone-scoping/videoing rather than being lucky enough to get any SLR shots. It was a beautiful walk along a long track, bordering tons and tons of reed mace, bulrushes, pools and dykes with cows grazing and Swallows skimming over the marshy landscape. At the end of the track you had to climb up onto the public footpath and walk quite a way left, to view a copse where the bird seems to favour. The Red-footed Falcon was on view straight away, sitting very, very distantly in a tree – even the phone-scoped video was naff at this distance! A bit later it took off and flew round over the marsh and landed much closer in a beautiful larch tree. I don't think any of us tire of seeing a Red-footed Falcon, what a cracking bird! It was still too far for SLR photography, but perfect for phone-scoped video, as you will see above! Also managed to get a few phone-scoped shots – one of below: 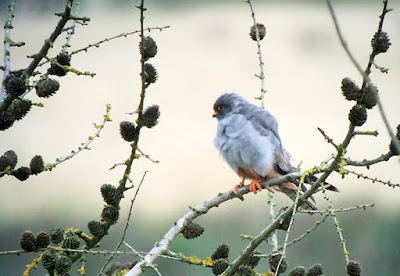 The Red-footed Falcon went missing for a while, then re-appeared in the larch tree again. Later it disappeared further over the other side of the copse. Several of us decided to walk along the bank to see if we could re-locate it. This also meant climbing down the very steep bank to climb over a 5-bar gate to get onto the actual reserve path. This paid off as we discovered the bird perched on a tall stick not that far from us! See below: 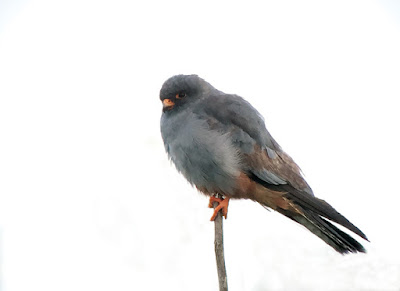 The light was now poor and birds high up against a dull sky, only result in black silhouettes! Steve climbed back up the bank again to get some greenery behind the bird (I presumed), but I couldn't be bothered to climb through 4 strands of barbed wire – don't know he did! I'm glad I stayed where I was to be honest. I spent ages creeping along the path, not making any eye contact with the bird, until I had walked past it and then got some half decent SLR shots both perched on the stick and when it flew off. It was quite settled on the stick, but someones phone ringing playing a bird tune seemed to unsettle it and off it flew – I managed to get a few flight shots before it flew off over the reed beds and that was the last I saw of it. 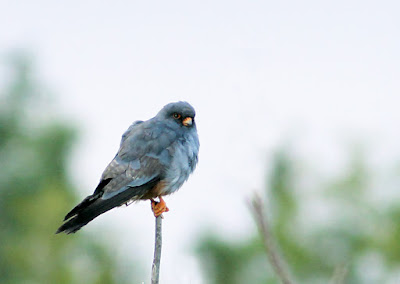 Red-footed Falcon, just before it flew off. 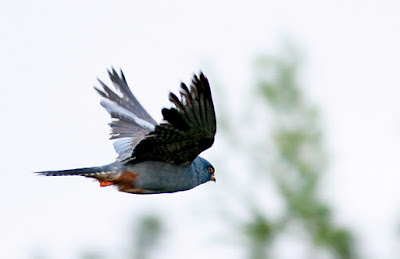 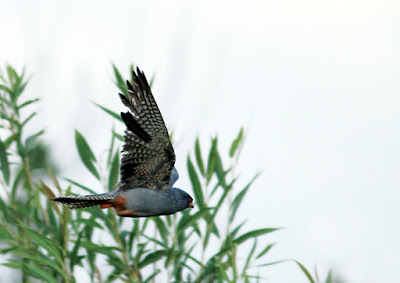 Red-footed Falcon flying off, late evening
The above three pictures taken with the Canon 7D and 300 f4 lens

Someone pointed out two Yellow Wagtails flying over our heads. Packed up my gear and walked back with another birder. A couple of Green Woodpeckers flew over the reserve on the long walk back to the car. Lots of hirundines skimming over the marsh. I was very impressed with this reserve, which has several hides and trails and it looks very impressive and rich in habitat, just a pity its so far away from me. The reserve leaflet describes it as "The largest area of wild fenland in Lincolnshire" The reserve was purchased by Lincolnshire Wildlife Trust in 2009. "Willow Tree Fen is developing fast with meres, shallow pools, lush flora and dry meadows. Once an arable farm, it remains a farmed landscape. However, the wheat and beans have been replaced by low intensity grazing with cattle and sheep helping manage the nature reserve." Here is the link to the website: http://www.lincstrust.org.uk/willow-tree-fen It also reads: that it is a ".....habitat defined by water. In winter the levels of water are topped up from the edge of the reserve, with the aim of getting the water level as high as possible. In the summer the water level is allowed to drop, creating muddy margins for feeding wader birds. Levels reach their lowest in July and August when we can access the fields and take hay cuts. Cattle graze some fields helping create a short sward ready for the overwintering birds that like to graze on short grass."

I arrived home just after 9pm. An excellent weekend all round! Roll on Thursday for my four days off. Some friends of mine are now going to The Rutland Bird Fair on Friday, so I may go that day now, rather than Saturday and also it depends on what birds are around anyway!
Posted by Penny Clarke at 23:53