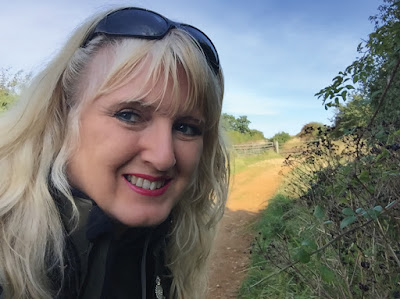 Searching for migrants at Burnham Over Dunes!

Loads of Swallows were gathering on telegraph wires at Stanhoe, as I headed to Burnham Overy. Parked up in the lay by at Burnham Overy to search for migrants. A Reed Bunting flew out of the hedge, as I headed off along the track. 11 Curlews were feeding on the marsh and 2 Chiffchaffs were in the big sallow, just west of the farm gates and stile. Bumped into Andrew B. with two ladies on route, who had seen 3 kingfishers, a sedge and willow warbler.

I could hear Bearded Tits 'pinging' in the reed beds, east of the sea wall. In the bushes at the end of the boardwalk, I sadly didn't see any birds. I was then going to head west to Gun Hill, but was drawn east through the dunes, when I spotted a Redstart and 3 Wheatears on the barbed wire fence about 100yrds along! Good numbers of Meadows Pipits and Linnets around and several more Wheatears as I headed through the dunes, at least 6. I watched a Garden Warbler high up in a bush on the dunes briefly and then continued on through the dunes to the Subalpine pit (local birders will know where I mean). I sat here for ages watching a Redstart, Robin and a Chiffchaff. With patience I did eventually get a half decent shot of the Redstart. Also heard a Green Woodpecker.

Continued my quest to find something exciting, up dunes and down – hard work these dunes for a olden'!!! Anyway, the highlight of the day was sitting overlooking the biggest hollow, right next to the pines. In one hawthorn bush there was a bird rave going on! Seriously! There was about 20 minutes of bird frenzy in that one bush! All of these birds appeared in here, not all at the same time, but several species together at a time – 3 Robins, Pied Flycatcher (briefly), Spotted Flycatcher, Chiffchaffs x 2, male Blackcap, Goldcrest, Chaffinch, Blue Tit, Coal Tits x 2, Long-tailed Tits x 3 and a Redstart. When the hawthorn bush eventually emptied, it was silent for ages and no birds returned. I moved round the dune to watch a Redstart in the dead elders and also 2 Hedgesparrows and 1 Chiffchaff. 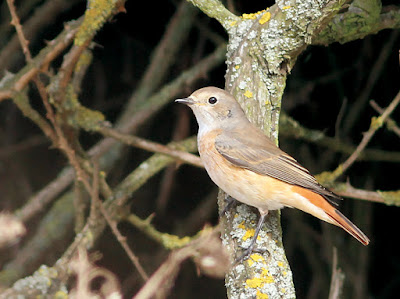 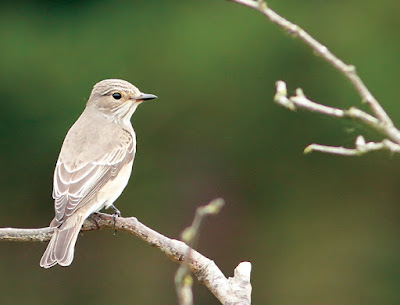 I then walked back at a fairly fast pace, as I wanted to get to Cleyspy before they closed at 4pm. On route I saw a Stoat, a Marsh Harrier and a Common Buzzard. There was a Redstart briefly in the bushes at the end of the boardwalk, but I didn't have time to wait for it to appear again.

I arrived at Cleyspy at 3.58pm! Phew! Made it. Collected my Paramo coat and waistcoat – both which have had their zips replaced and waterproofed again. This means I will be able to search for migrants in the forecast torrential rain and North easterly winds this week and stay dry! Great! 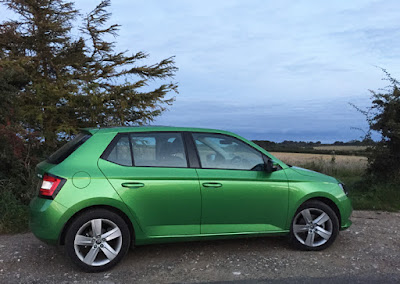 Sat at Beach Road, Salthouse to have my very late lunch. Steve G. pulled up to walk to Gramborough Hill, as did John F! They both went on ahead of me. I joined them as they were leaving the hill, but John walked back with me and we were then joined by Rob H. Rob had walked BP today and hadn't seen anything spectacular, apart from a couple of Redstarts and a juv. Golden Plover (which he got a stunning picture of – see here). The three of us peered into the bushes – no sign of anything mega, but did have a nice Redstart. Walked back to our cars and then I re-located to Meadow Lane and walked to the two big sallow bushes, in hope of a Yellow-browed Warbler, but they were both devoid of birds. Stunning sunset as I drove home. 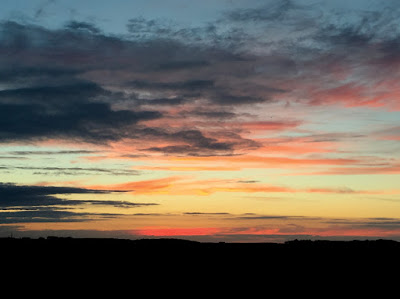 Sunset just south of Blakeney
Posted by Penny Clarke at 23:57