Heron is star of the day!!! 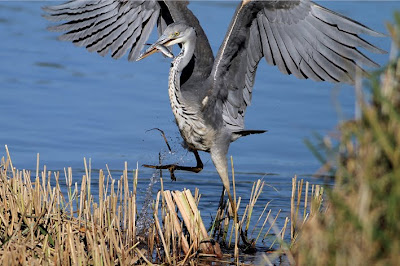 Yellow-browed Warbler in a private garden at Holme.

Holme Marsh Reserve NWT
I spent a long time watching and photographing a heron fishing from the first hide at Holme NWT Marsh Reserve. It caught a Rudd - and also caught and gobbled a pair of dragonflies in tandem!!!! This was so quick, that if you had blinked, you would have missed it! A water rail ran across the cut reeds and two marsh harriers were seen over the marsh. Other birds of note were: little grebes, teal, mallards, wren, blackbirds, a party of long tailed tits, goldcrest and flocks of pink footed geese over the marsh and a sparrowhawk over our heads by the third hide. 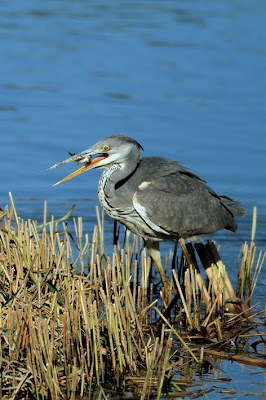 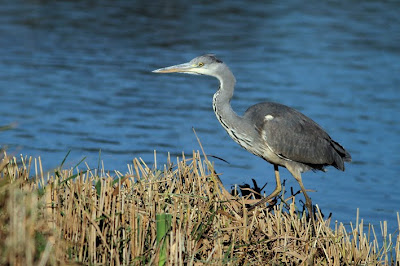 On route to Titchwell we noticed Dave Holman going the opposite direction - my detective brain soon tuned in to something going on - looked at Eddie's borrowed pager (which doesn't bleep) and noticed a Glossy Ibis had been seen going west past Titchwell at 2.20pm - it was now around 2.40pm - my guess was that Dave was trying to catch up with the Ibis further west. We spun round and drove to Thornham Harbour, which is exactly what a few other birders had opted to do, in hope that the Glossy Ibis would cruise past. After about 5 minutes I phoned Sophie Barker, Warden at HBO to get any inside info - she had just heard the someone at Holme NWT reserve had seen the Glossy Ibis flying through west - so no point in standing at Thornaham any longer to look for it! So we headed back to Titchwell.

Titchwell RSPB
Along the Fen Trail, several red admirals were sunning themselves on the ivy covered tree just before the hide. Little else was seen around the trail though. Along the main path: Cettis Warbler singing, bearded tits 'pinging', flock of goldfinches came down to drink in the freshwater lagoon, a Redpoll flew over south west, a few linnets, several teal, wigeon and a little egret. On the sea were gannets and great crested grebes and along the shore were sanderlings, turnstones, grey plovers and loads of gulls. From Parrinder Hide: a Jack Snipe, one Spoonbill and more gulls etc. Male Hen Harrier towards dusk.

Ended the day with an indian takeaway!

PICTURES TO BE ADDED
Posted by Penny Clarke at 21:49