Picture taken from back of Connor's camera! 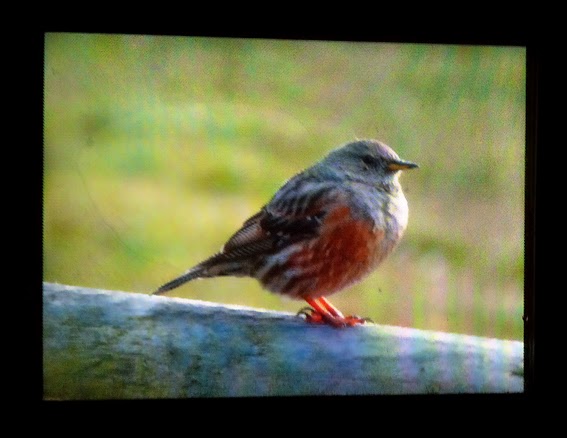 The X on the picture below is where Connor photographed this mega bird – incredible!!! 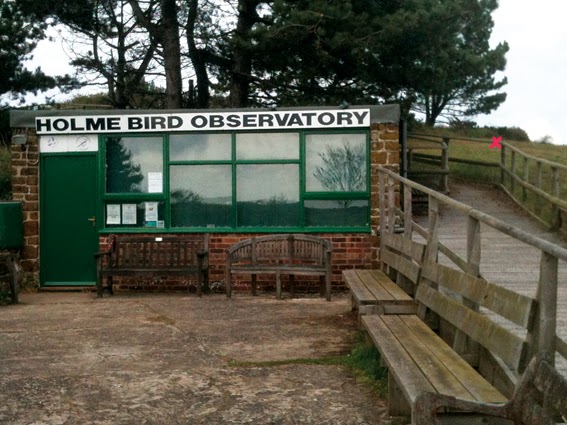 I have seen Connor's pictures and they are stonking – I don't know how he managed to keep the camera still! I think he was too tired to add them to the net tonight!!! They will follow tomorrow!!!


Connor has very kindly allowed me to add a couple of his pictures to my blog, which is much appreciated, thank you! 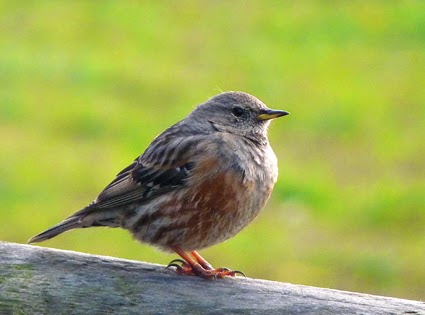 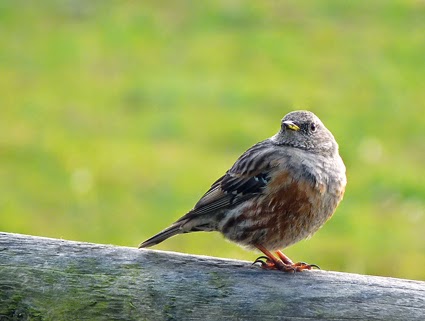 
Where do I begin!!! Well, I was going to Choseley this morning, to see if yesterday's Turtle Dove was still there. Yet again, I was not up early! When the pager Mega'd ALPINE ACCENTOR at Holme I had had no breakfast and none of my gear was in the car. I flew downstairs and ran in and out of the house putting gear in boot and drove at Penelope Pitstop speed to Holme! I seriously can't remember what time I got there, but I was the third car in the NOA carpark! By this time I had had a phone call from Connor on route to tell me he had found it! I won't go into Connor's full account of his find, that's for him to tell, but basically he found the Alpine Accentor early morning AND managed to photograph it! I just can't believe he saw it on the bl**dy rail next to the observatory, how jammy was that! I feel really sorry for Sophie though, who was putting mist nets up at the time. Connor was the only observer. Connor presumed the bird would be seen again throughout the day, but sadly this was not to be for all the other birders who turned up and continued to turn up throughout the day.

I will keep this fairly brief as its very late and I am exhausted, but I spent the rest of the day at Holme searching for that bird. It was raining on/off for the most of the morning, but brightened up mid to late afternoon and the evening turned out to be the most beautiful part of the day.

Lots of birders turning up, who I won't list, as it will take too long, but I think most of the Cley birding fraternity were there! I did muse to myself that if James MacCallum found something on Blakeney Point there were be a big race back to Cley!!! Connor and I walked round the back of the pines and along the beach searching for this bird. Through tons of phonecalls and texts, Connor's phone had run out of battery, but luckily I had my iphone lead with me, so Connor was in luck (again this morning)! We drove to the end of the Firs Road and parked by the toilet block. We walked west through the golfcourse and as far at the beach chalets at Old Hunstanton and back. On route we had an incredible selection of birds – at least 20+ Wheatears in the low valley area – there were so many we had a job to count them all! 1 Ring Ouzel was also seen in a bush and flying off, a huge flock of 35 Yellow Wagtails flew overhead, several Linnets were seen and Whitethroats and Lesser Whitethroats were heard. Several Swallows flying through. Back at the car we had a Swift go over our heads, (my second this year) and a Cuckoo was calling. News of 4 Dotterel at Choseley cleared most birders out! Both Richard 'The Hat' and I couldn't believe so many people had left so early. Ok the bird may well have moved on straight away, but no one knows that for sure. I walked to so many areas, I can't remember what order and when I did them in now and I'm very tired as I write this. 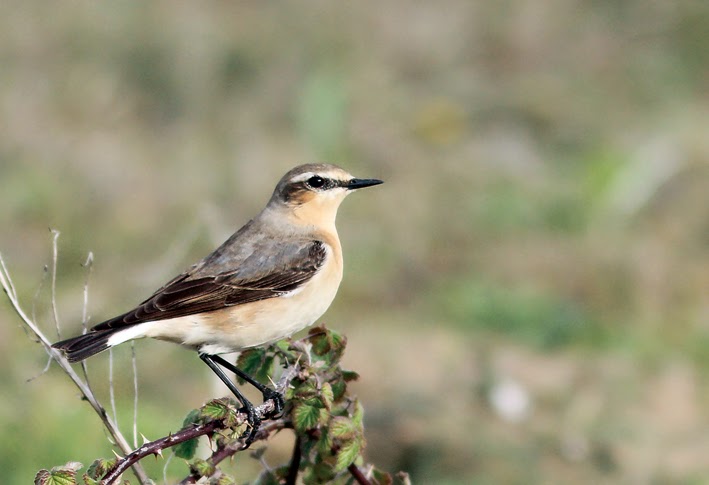 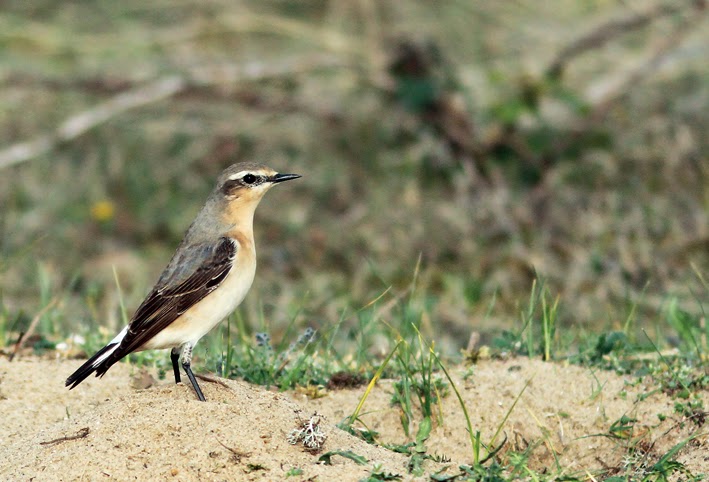 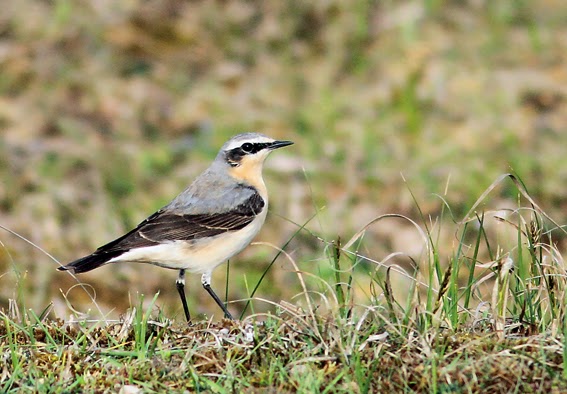 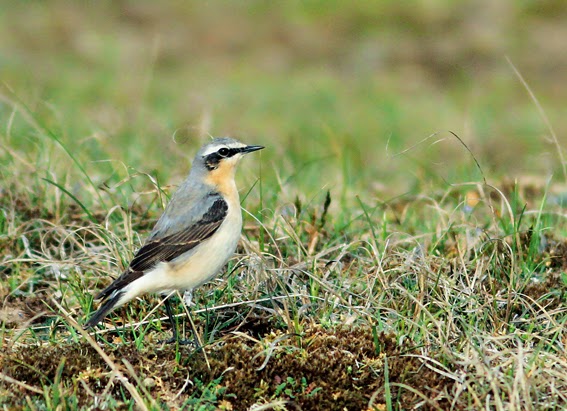 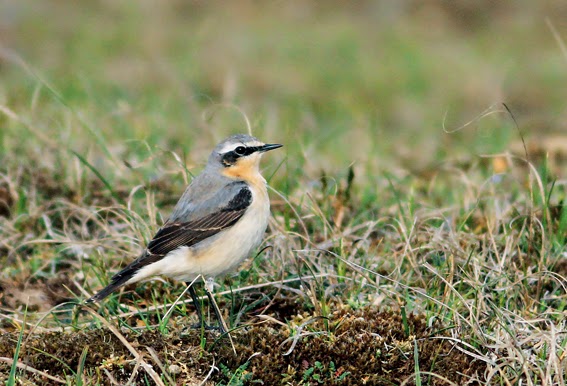 Back at the NOA carpark there were two Grasshopper Warblers reeling and a Sedge Warbler was singing. Connor went back to the observatory. I sat in the car having a coffee while the rain was falling heavily – good move! I continued searching, covering the NWT Forestry where I saw 5 Wheatears, a Kestrel and a Marsh Harrier over Holme marsh. There were another 3 Wheatears in the Horse Paddocks along the Firs Road. I spent time sitting in the Dell Hide that overlooks the pond next to the observatory three times today, as this is sheltered and has had some good birds here over the years – hedgesparrows appearing from the undergrowth, got the heart racing! By early evening I was the only birder left! It was a beautiful evening with full sunshine. There were 4 wheatears sitting out on Holme marsh. It would have been pretty awesome if that bird had appeared when I was the only one left! I walked round the observatory again and along the top board walk towards Thornham, back again and around the pines and beach, then crossed over to the carpark. Left and parked at the 5-bar gate and walked all along the back of the bungalows and Saltings. At least 6 Whitethroats were heard and seen, 6 Red-legged Partridges and three birds 'in off' the sea birds, which were a single Collared Dove, a Snipe and a Gadwall!!! Several Cuckoos bombing about too and calling.

I went back again to the observatory for a final look round and finally gave in at 7.45pm. Went to my parent's. Showed mother Connor's picture on the back of my camera, she was really pleased for him. Went to the supermarket in Hunstanton for mother, grabbed chips and back to Holme again. Eventually arriving home at around 10.15pm! Phew!
Posted by Penny Clarke at 22:22