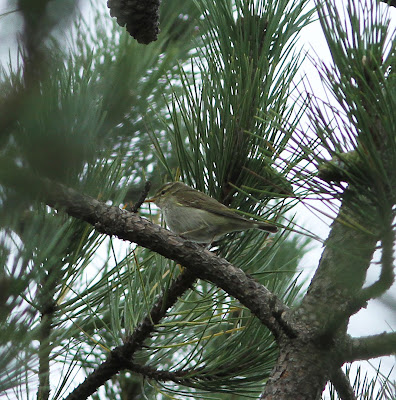 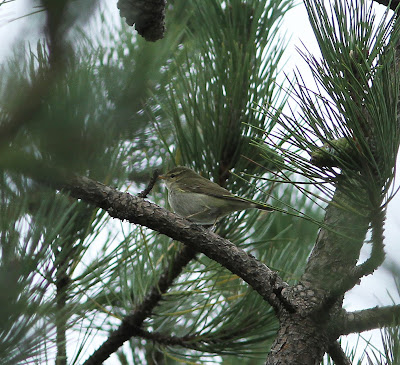 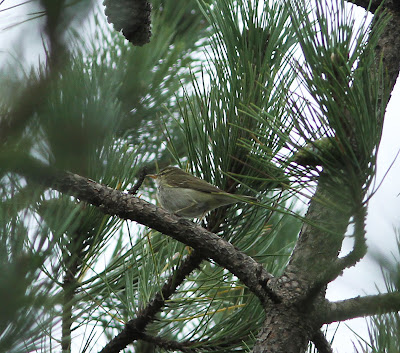 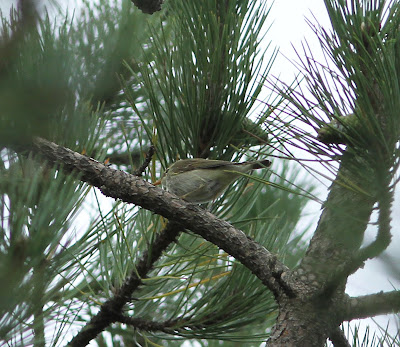 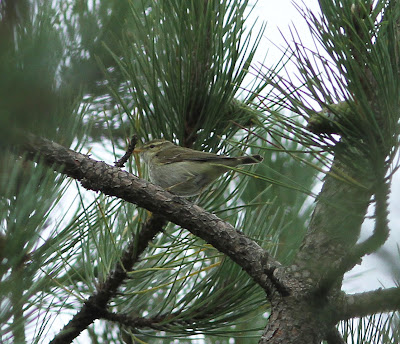 Arctic Warbler, Holme NOA/NWT.
(If only that irritating little twig had not have been there!)

Had the best Monday morning EVER on a working week!!! Every week 2 therapists from our team have to work a late shift resulting in one per month each and so today I worked from 12pm until 8pm which mean't I could go birding this morning!

After doing a double shift yesterday I didn't set the alarm, but woke up at 7am and ended up at Holme by 9amish. On the way down to the reserves, 3 Goldfinches were on teasels half way down the Firs Road. I had to leave by 10.30am to get back to work, so I had an hour and a half to see and attempt to get a better photograph of the Arctic Warbler! (ha ha) Beautiful sunny morning, sea right up the dunes again and to my surprise quite a few birders on site for the Arctic Warbler. I was soooo lucky to both see and photograph it again, in fact I saw it more or less straight away at 9.15am and got some half decent shots (pre the sun coming fully out of course!). I havn't seen any photographer get any prize winning shots yet though - its a little devil to photograph which actually is what compels me to keep going back to get the perfect shot! It seemed alive with birds this morning and I so wished I didn't have to leave to go back to work (must find myself a rich sugar daddy, so I can go birding, photograph, start painting again etc etc!)

Bumped into Bas Harding whilst there who showed me his NOA permit - it was the first one he had ever bought he said - he had never had to pay in all the 65 years he had been coming to Holme! He smiled and said he was going to get it framed! Also bumped into Barry Jarvis (long time NOA member). Walked back to car via the observatory - on route I saw something I had never seen, which equalled seeing the Arctic Warbler again - alongside the steps up to the main bank (from obs.) I suddenly spotted a common lizard lounging on blackberries, a good few feet off the ground - it was the perfect Macro shot and where was the macro lens..... in the car!!! It simply looked stunning, it glittered in the sunshine and set against black and red blackberries it would have been a masterpiece - there was no way I had time to go back to the car for the macro lens, so stood back and took a record shot (at wrong angle) with the 300mm lens - how frustrating! 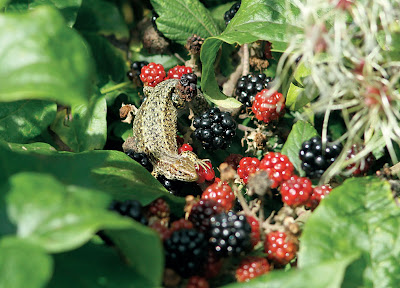 Anyway, I continued along the main bank and stood with others to attempt to see the Barred Warbler which had been showing 'a couple of minutes ago', so Barry J. told me! Missed the barred warbler as HAD to leave for work now - it was now 10.35am and the supermarket I had intended on going to would now have to be scrapped! Stopped at Old Hunstanton shop to grab a vege pasty which I ate on route back to King's Lynn and made it to work on time! No sign of the Red necked Phalarope today.