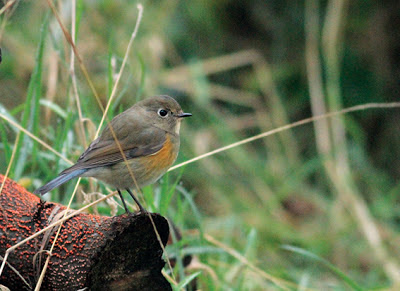 
I really, really wanted to see the Red-flanked Bluetail that was found yesterday by Mike Sidwell at Stiffkey Campsite Wood – I was so pleased to see that it was still there today when I looked at the pager at lunchtime. I will never tire of seeing these exquisitely beautiful birds with their iridescent blue tails. Foggy all day again in King's Lynn and along the coast, meaning that thousands of birds are still grounded. Just think of the rares to be found if more people were out and not at work! A birder last night had typed on the net somewhere 'is it Friday yet?'

I left work promptly at 4.15pm and flew to Stiffkey! It seemed to take forever to get there! There was a car in front of me, a lorry in front of the car and a tractor and trailer in front of that, combined with nasty fog!!! I managed to get there by about 5.20pm. I have never grabbed my bins and camera so quickly out of the boot of the car! I jogged along the campsite wood path, passing a policeman on route who told me 'its still there'!!! The light was seriously fading now. That path is so much longer than it should be! There were only two birders there when I arrived at the bluetail spot and for a few scary minutes it was not showing. Then, suddenly there it was, firstly in the brambles with robins and then posing oh so beautifully on a pile of moss covered logs showing off that stunning blue tail. OMG I just love these birds, there are just so incredibly beautiful. I managed to get some photographs, although the ISO was 6,500!!!!! So grainy pics will appear later this evening! The most showy bluetail I have come across, if ONLY I wasn't at work and I could have photographed this earlier in better light!!! I just couldn't focus on this bird any longer, the light had totally gone. Watched this stunning little bird right up until 5.55pm.

I walked up the east end of the wood and dropped down to the lower path to get as much light as possible to see anything else dropping in on route back to the car. The calls of birds overhead filled my ears - it was just incredible. Tons of blackbirds dropping into the trees as I walked back in almost darkness back to my car and thousands of starling and smaller birds dropping into the marshes. What I would give to be back here tomorrow morning at first light!

The fog and was pretty bad on the way to Stiffkey and was absolutely atrocious on the return journey – much worse than yesterday. I was only doing 30 mph on the way back along the B1105 road from Wells to Fakenham, so you know its bad if I am only doing that speed!


If anyone even thinks about walking East Hills in fog like that, they needs to go and seek urgent help! Someone did today though – see HERE. My mother was recalling a story to me yesterday of many years ago, when when she walked out along the beach at Holme in fog and truly believed she was walking back towards the dunes, only to find herself at the sea's edge. She said that she was horrified that she went so completely wrong. Fog can be very, very disorientating. 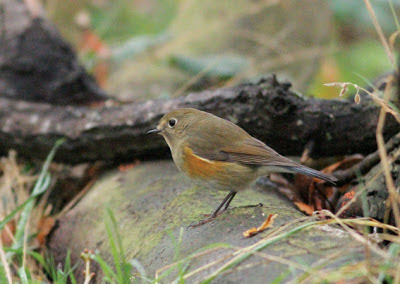 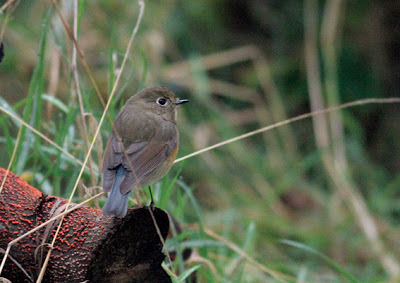 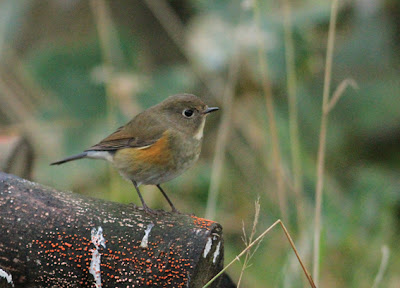 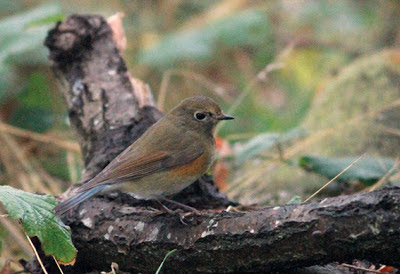 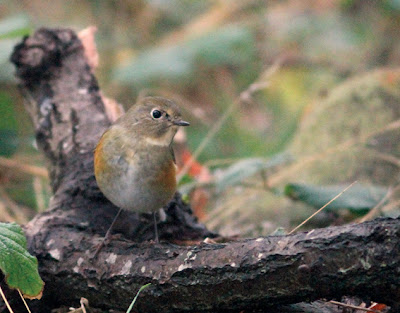 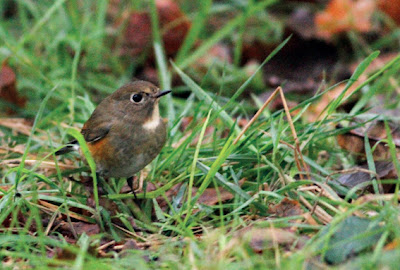