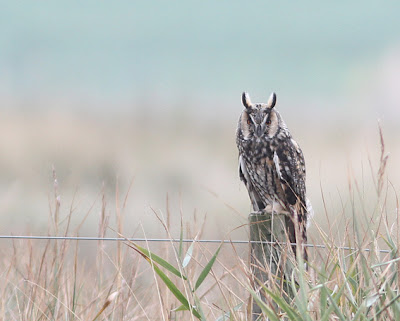 LONG-EARED OWL
West of the East Bank, Cley NWT – Bird of the Day!

Garden Drove, Warham
I arrived at Garden Drove, Warham Greens at just before 7.30am. It was obvious there were tons of birds around as thrushes scattered from the hedgerows, as I drove up the track to the concrete pad. It was going to be an exciting day! My plan was to spend a short time here and then walk Blakeney Point. Shortly after I started walking down the track James Mc. parked up on the concrete pad – always a good sign! I carried on. First good bird I found was a Redpoll feeding up in the foliage directly above me – I pointed this out to James when he caught up with me on the field side of the track. There were loads of Redwings and Robins scattering all the way along the track. Thousands of Redwings flying overhead throughout my time spent here. At the end of the track in the copse there were Song Thrushes, Blackbirds, more Redwings, Robins, Goldcrests and 2 Bramblings. James had a Ring Ouzel in here, which I then saw along the hedgerow west of the main track. I followed this hedgerow for a good mile. I couldn't help but carry on – there were so many birds along this hedgerow, my arms ached from putting my bins up!!! Tons of Redwings both in the hedges and overhead. A massive flock of Linnets overhead and also lots of Meadow Pipits. Also in the bushes I saw male and female Blackcaps, Hedgesparrows, Greenfinches, Goldfinches, loads of Bramblings, Reed Buntings, Goldcrests, Long-tailed Tits, Song Thrushes, Blackbirds, Fieldfares, 2 Ring Ouzels, Robins, Wrens, Great and Blue Tits. Mark G. sent me news about a Pallas's Warbler he had found at Barns Drift, Cley! I continued to look and hoped to find my own Pallas's Warbler, but with thorough searching of the tit flocks I did not strike gold! What a haul of birds though! I worked my way back to the concrete pad. Walked down to the farm buildings where I saw the snow bunting again (two here apparently). Lots of robins and thrushes around the buildings and hedgerows. Walked back to my car and bumped into Kieran and friends, who had seen a Mealy Redpoll in 'The Pit' east of the track. There was also news of a Long-eared Owl by North Hide at Cley and then later sitting on the shingle bank!

House on the Hill, Blakeney
A few Redwings and Robins. A Roe Deer ran across the field as I walked along the path but nothing else of note. 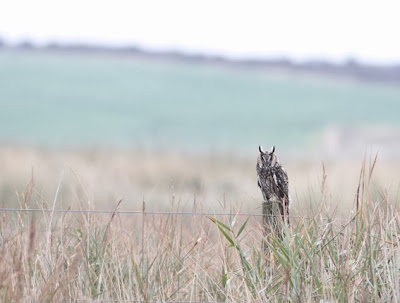 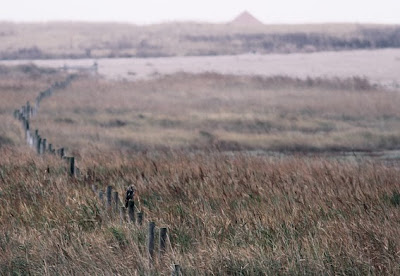 Cley
Spent a bit of time (although not long to be fair) at Barns Drift along with others to try and see the Pallas's Warbler that Mark had found earlier, but no luck. The last news I had on the pager about the LEO was that it had flown off East at 11.45am. Not a single birder or photographer had bothered to put news out, that it had re-located to a post at the end of the East Bank until I put the news out at 1.03pm (a couple of people told me they could see several people standing photographing what must be the owl on the shingle bank, west of the East Bank. I parked up in the East Bank carpark and speed walked along the bank. I had lovely views of a party of Bearded Tits on route. Wow, that owl looked magnificant! The Long-eared Owl was sitting on a post, just the other side of the reed bed which lines the bottom of the shingle bank, west of the East Bank. It just looked so beautiful in this spectacaular setting. I joined the photographer standing closest and wished I had bought my tripod, but managed to get a few sharpish shots in the end. I sat and rested on a boulder and watched the sea for a bit. The light was beautiful and I saw a gannet sailing past, fairly close in (see picture). I spun round on the boulder to watch the Long-eared Owl again. What a wonderful place to be right now! None of the forecast rain had arrived yet and it was quite warm, but there were lots of dark clouds looming. I walked back to the car and bumped into Eddie, whom I gave a lift to the bottom of 'Old Woman's Lane'. We were just about to walk along the road to try and see a Pallas's Warbler in a garden, when news broke of a Dusky Warbler at West Runton!!! I left Eddie to go and look for the PW and I spun round to go to West Runton. My walk out to Blakeney Point was looking less and less likely, the way things were going! 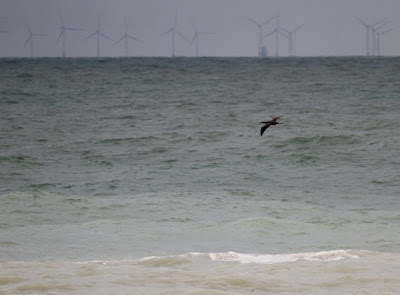 
West Runton
Congratulations to Simon Chidwick who found the DUSKY WARBLER! It was skulking about and tacking away in the brambles, north of the old farm buildings, just off the A149. I saw it move about several times and had a view of it flying across the top of the brambles. As far as I know, no one had a picture of this bird – I spent a long time here and thought I might get at least a smudge on the back of the camera, but not a thing. I was lucky to see it, never mind photograph it as when it started to rain, the bird went quiet and hardly moved at all which was unfortunate for those birders still arriving to see it. Someone shouted 'Great Grey Shrike in the willows' – wow, there was a Great Grey Shrike sitting distantly in a huge clump of willows at 4.25pm.

Cley
I returned to Cley and parked up at Old Woman's Lane and searched in vain for the Pallas's Warbler.

Little Eye, Salthouse
I was going to end the day at Gramborough Hill, but two ladies proceeded to walk in that direction with two very bouncy labradors, so opted for 'Little Eye' instead. Little Gull on the flooded marsh and 8 Turnstones on the shingle by my feet. Robins and Meadow Pipits in the Gorse on top of the hill, but nothing else of note.

Sat in my car and had the rest of my sandwiches and coffee and drove home.

What will tomorrow bring I wonder? Maybe a Parrot Crossbill at Holkham or East Hills or maybe a Red-flanked Bluetail at Burnham Overy Dunes or Blakeney Point? I will be quite happy if I get to see a Pallas's Warbler to be honest!
Posted by Penny Clarke at 23:46