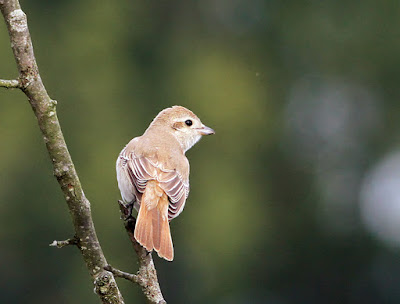 I left my house in darkness. Two police cars flew past me as I left King's Lynn and shortly after this as I approached Hillington, the traffic in front of me slowed suddenly – there was a crashed car next to a fallen tree and the police cars were attending. I don't know if the tree had fallen on the car or the car had hit a tree, causing it to fall? Whatever had happened, it didn't look good, not a good start to the day – I hope the occupants survived.

I arrived at Beeston Common at 7.30am. My photographs of the Isabelline Shrike yesterday were not up to much and I wanted better pictures, so returned for more! Very cold first thing today and very cold at dusk later too. The Isabelline Shrike performed beautifully and I enjoyed watching this stunning bird today much more so than yesterday. Nice to see lots of familiar faces here, and nice to meet some new blog readers, stood next to Julian B and James H. Also heard a Yellow-browed Warbler and as James pointed out, a croaky sounding Robin! 4 Bramblings sitting in a rowan tree looked fabulous in the morning light, but flew as soon as I started to video them. After feeling fairly happy with the shots I obtained, I left to find some birds. 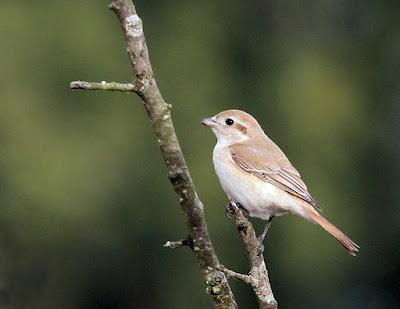 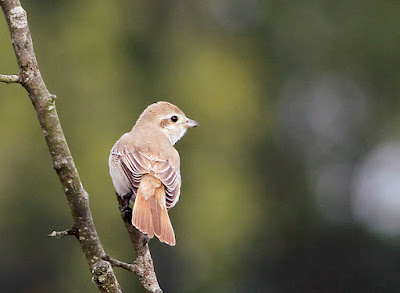 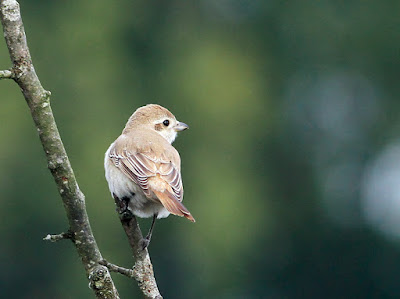 I relocated to look for yesterday's Pallas's Warbler at Sheringham Golf Course. No sign of this bird, but a fabulous mixture of birds here including a Redstart and then found 5 Stonechats, 2 male Blackcaps, loads of Goldcrests, a Green Woodpecker on a tree, huge flock of Goldfinches, a Short-eared Owl flew in off the sea and cruised round the Golf Course for a short while. A Kestrel hovering, cracking pair of Yellowhammers on the hawthorn hedge, glowing yellow in the sunshine, Blue Tits, Great Tits, Robins, Wrens and best of all a probable Great Grey Shrike – I caught this with naked eye, bounding over a hedge and when I then looked at it with bins, I couldn't see it, but there were 5 Stonechats all together in close proximity looking alarmed. I searched for that probable shrike for ages, very annoying not to find it, oh well! Several Skylarks in the rough field. Returned to my car and headed towards the cemetery to find some birds, when 'RED-FLANKED BLUETAIL at Holkham' bleeped up on the pager!!! Spun the car round and headed west!

I begrudgingly paid £5.00 to Lord Coke at Lady Anne's Drive. It now costs £6.50 for the day, I refused to put that much in the machine – £5 gives you four hours. Lots of other birders arriving for this magical and very popular vagrant. LGRE kindly phoned me to ask if I had heard about 'his' birds he had found including the Dusky Warbler, 3 Richards's Pipits,  Firecrests, Ring Ouzels, Short-eared Owl and was the second observer to Dave Holman finding the Red-flanked Bluetail – thank you very much! I have not walked from Lady's Anne's Drive through to Holkham for a long time and it seemed to take forever to get to the 'crosstracks', which is where the bluetail was, well 50 yards west of there to be exact. 2 Little Grebes were ducking and diving at the Salthole on route and had cracking views of 2 Red Kites overhead.

I can't remember what time I arrived to wait for the bluetail, but it took hours to see this bird. 50 yards west of the crosstracks on the left hand side, a few yards into the trees were a long row of birders – everyone was almost silent, very impressed by the quietness. I sat down in front of some people and got settled, I could tell it was going to be a long haul waiting for this bird to show. It showed a couple of times for a nano second for a lucky few that were quick enough, lucky enough and sharp enough – unfortunately I didn't fall into any of those categories. Very frustrating to see it coming up on the pager and STILL not having seen it!!! It was dark and gloomy in here and the light was poor, which made it very chilly sitting and standing here for that length of time. I refused to budge until I had seen it though. Peering into dark undergrowth and lichen covered logs for so long, becomes monotonous after a while! A few of us mused that it was probably sitting in the sunshine on the other side of the trees – one birder decided to investigate this idea and came back like the cat that got the cream – he had walked round the back of the trees, stopped to view an open area, phished a few times and out it came in all its glory! Good for him and thank you. For some strange reason, only myself and a couple of other birders walked round there. We were rewarded with at least four brief views of this cracking bird in the large hawthorn bush. Because of the reeds etc we couldn't get close, but I very luckily managed to obtain one record shot, which I was very pleased about indeed. I didn't think I was even going to see this bird, never mind photograph it! It suddenly started to rain and I had to put the camera away quickly. 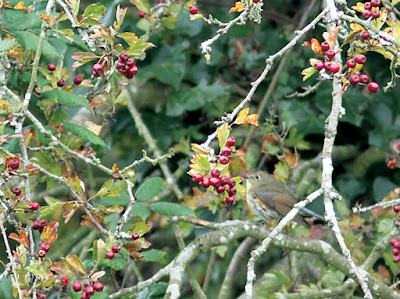 The light was disappearing fast – instead of being sensible and walking back, I continued west in hope of seeing the Dusky or Radde's Warbler. Neither were seen or heard, but I got really excited when I walked up the path at the end of the pines and down, to view the scrub south of the fence – four Ring Ouzels were in the bushes! One stonking male was really close in a bush and there was me with camera tucked away in the bag. Scurried around to get the camera out, turned round and the male Ring Ouzel had moved away to sit on top of a distant hawthorn bush, bother! I did manage to get a record shot of a female though which was fairly close, but the light was atrocious – put the news out to RBA. A couple of birders were very pleased to see one of them as they came out of the pines and also Lee managed to see the same bird too. There were several thrushes around, including a greyish coloured one, which to be honest I wished I hadn't seen, as I couldn't find it again after it disappeared behind a bush! Someone else will bag that tomorrow no doubt!

I thought about walking back, but the sub-alpine pit (as I call it) beckoned and I climbed up the dunes and worked my way to towards it. Flushed several thrushes in the gloom and that was it. Headed back and had forgotten how long it takes to get back to Lady's Anne's Drive from here! The torch had to go on half way back! Heard a Tawny Owl. I was the last one to leave – how unusual, not! I had just reached my car when Lee very kindly phoned me to warn me about the police cars/coastguards etc in Lady Anne's – apparently they were on standby or something.... some horse riders were missing or got stuck on Scolt head with the tide – sounds crazy! Just found the story in the EDP!

Update on the horses and riders at Scolt Head Island HERE.

Saw a Barn Owl on a post just outside Burnham Market on the way home. Shattered and no energy to even think about getting pictures off the camera tonight, sorry! Will have a bash at sorting photos tomorrow night. What a day! What will tomorrow bring!?

PICTURES TO BE ADDED
Posted by Penny Clarke at 23:59