'Knot' There When I Was!!! But found a PACIFIC GOLDEN PLOVER! 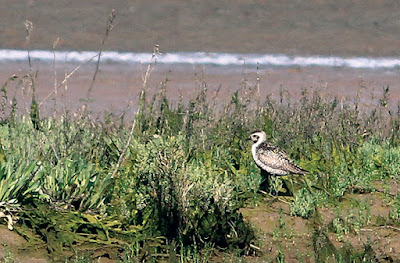 
I was up very early this morning and arrived in the car park at Titchwell RSPB at 6am. It was raining and it was very cold with north west winds. I headed along the main footpath towards the beach. Bumped into Dave A. who said the beach was birdless and there were no sign of any Knot, never mind a Great Knot! I dived into Island Hide to take shelter as the rain got heavier. As I type, this morning seems so long ago – I can't really remember everything that happened today! Parrinder hide was full with birders. Watched two cracking Little Gulls, Little Ringed Plover, Common Terns, Little Terns, Med Gull, cute Avocet Chicks, lots of Black-tailed Godwits, juv Pied Wagtails, Spotted Redshank, Knot and some stunning Red Knots, Shelducks, Marsh Harriers over the reed beds, Little Egrets, Grey Heron, Reed Buntings, Linnets, Teal, Swifts, Swallows, heard Cetti's Warbler etc. Bumped into and met the finder of the Great Knot, Chris Booth! Took his picture to add to my initial Great Knot post, thanks Chris!

The pager bleeped up with news of the Great Knot being on the beach, but sadly several others and myself didn't make it in time, before it departed. Spent the entire day, as did many others, searching for the Great Knot, between both Parrinder, Island Hides and the beach. I was so cold by late morning, I returned to the car park and changed into thermals! The car park was full and cars were queueing to get in. Had a lovely lunch in the 'feeding station' with Eddie M. – potato skins with cheese and onion, coleslaw and salad, followed by rhubarb crumble and custard – lovely! Met a blog reader – nice to meet you. With batteries recharged, I continued with my search for the Great Knot. Also bumped into a very sweet lady call Fiona who lives in London and was very complimentary of my blog – nice to meet you – also Fiona had seen three Cuckoos at Thornham Point and saw the recent Leucistic Starling amidst a large Starling flock.

Headed to the beach again – no birds on the shore, but the sun was now out and the light was glorious. I felt really tired – walked west and had a wonderful snooze in the dunes! Took some scenery pictures as I walked back along the beach. Gannets passing by distantly and a few terns. Still no Knot on the beach, nor any other birds. Headed back along the main footpath. A couple of birders who were heading out to the beach asked me if there were any birds out there – 'none' I replied.

Bumped into Rob H. who was photographing an obliging Little Tern alongside the path. As I walked over the rise (by the wooden seat) to walk past the brackish marsh, a bird caught my eye – standing tall and upright on one of the grassy islands, fairly distantly. It looked different – on first views with naked eye, I had no idea what it was. Quickly looked through my bins – it looked striking and stood out with white over eye and continuing down head, neck and breast and was dark under belly and tail with heavily brown/golden pattern on wings, back and tail. It was long legged – I started to panic for a moment, but it had to be a golden plover I thought, but somehow it didn't seem right. I didn't even allow myself to think that it could have been anything else, but a golden plover. I wish now that I had thought about this more – I mean, I have several birding apps on my phone! The correct ID of this bird was on my phone, but at this moment I carelessly ID'd this as a Golden Plover – I was extremely tired and that's my excuse!!! Its incredibly frustrating, as I should know that Golden Plover do not have legs this long and its stance was different – more upright. After taking a few SLR record shots at 5.13pm, I set up the scope and phone-scoped a single picture and also took a short video, but the quality is pretty dire, because of the distance. 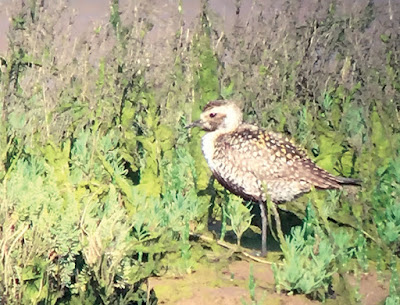 Anyway, as I stood here watching my 'Golden Plover', the two birders I had spoken to earlier about there being no birds on the beach, approached me and said 'you were right, there were no birds on the beach' and I replied in jest 'see, you should have listened to me'. I then said 'I have a Golden Plover in my scope if you want to look?'. Both birders (and they came across as very competent birders) looked in my scope at the Golden Plover, thanked me and carried on along the path. I then continued along the path and went into Parrinder Hide to join Eddie M. and many others who were looking at the Knot flock and hoping that the Great Knot would reveal itself. Whilst sitting here, the pager bleeps up with 'Pacific Golden Plover, Titchwell RSPB on brackish marsh, briefly 5.50pm then flew west to Thornham Marsh' – I can't remember my exact words now in front of a entire hide full of people, but I think I said something like 'NO!!!!!! As soon soon as the message came up, I realised that was the bird I had been watching and along with several far more experienced birders than myself, several birders agreed, that the pictures I had, were indeed of a Pacific Golden Plover!!! Special thanks to a group of Essex birders who helped me with this. I was gutted to say the least – lazy ID skills, when I knew it was different and I didn't bother taking it any further, so tough! A lesson learn't Penelope!!! Congratulations to Mike Buckland who found and put the news out of this bird and obviously unbeknown to him, I had seen it approximately 25 minutes earlier. I have been cursing myself for the rest of the evening. If only I had put more effort in and put out news that my bird was a possible Pacific Golden Plover – it would have been the best rare bird I have found to date, but the 'rules' are, I didn't ID it correctly at the time, so can't claim it as mine – oh well!!! Thank god it wasn't a first for Britain! On another note, I wonder how long that bird had been sitting on the brackish marsh and how many birders walked past it today!

More pictures and several videos to be added.
Posted by Penny Clarke at 23:58