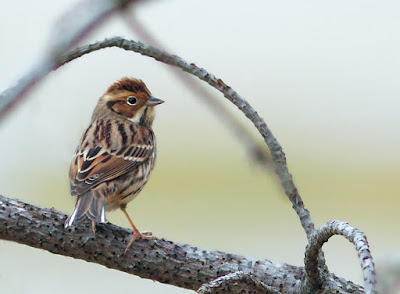 LITTLE BUNTING
In the rain at East Hills, Wells

On route to Wells I witnessed a massive flock of what looked like Redwings/thrushes overhead – there must have been thousands, I can't recall witnessing that many in one flock. I never saw the tail end of the flock whilst I was driving either – fabulous start to the day!

Wells Woods
I hate paying to park anywhere, but with the selection of birds on offer yesterday, I really had to! It cost me £3.50 for two hours, I wasn't paying for three, which would have cost a humongous £6.50! Rain showers forecast all day and winds remain east – all good!

There was probably more birders than birds in the woods – ok slight exaggeration! The Olive-backed Pipit was not playing ball and was extremely elusive. I spent a long time away from the main crowd searching all the little paths they love to run and feed along, but with no luck. There were tons of Goldcrests and Robins and I found a couple of Chiffchaffs and Blackcaps. Walked up to the drinking pool area, but nothing more exciting to be found. The highlight was seeing Geoff and Pat Douglas as Geoff had been unwell recently – he now looks better than before – so glad to see you up and running again, especially in time for Autumn birding! Met a few blog readers – nice to meet you all and thank you for your support. With lots of boots on the ground, I fully expected more birds to be found, but that wasn't to be.

East Hills with John Furse!
Very wet  conditions out here, but we were fully togged up with waterproof gear – my camera was wrapped up in a selection of waterproof bags and we were ready to find that mega!

Approximately 25+ Brambling were flying around and landed on a bramble bush and a Wheatear joined them briefly along with two Reed Buntings. In the pines there was a good number of Redwings, Blackbirds (with their black beaks, continental), Song Thrushes and tons of Goldcrests and Robins, but not the huge numbers that I witnessed yesterday. John and I naturally veered off in different directions and obviously arranged to phone each other if we hit the jackpot. The Little Bunting was still present and my shots improved from yesterday, but still havn't obtained the perfect picture.... yet! I watched a Chiffchaff in the same tree as the Little Bunting. I flushed a Woodcock in the leaf litter by the sycamores which was nice and saw a few Chiffchaffs amongst all the Goldcrests. It would have been great to find a Pallas's Warbler out here as I did before once, but it wasn't to be today. 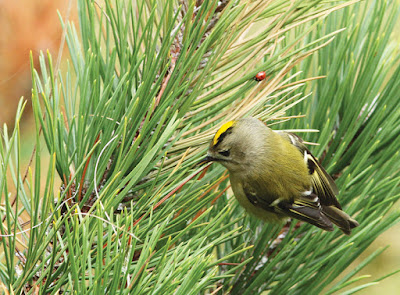 John phoned to say he had a Long-eared Owl briefly and had also seen 'my' Mealy Redpoll that I had found yesterday. I lost one of the rubber bits off the eyecup to my bins out here somewhere. A bit later I was overjoyed to flush the Long-eared Owl from a thick pine tree and a few minutes later watched it fly from a tree into the dense pine copse – I didn't see it any more and those fleeting glimpses were far too fleeting for the camera sadly! 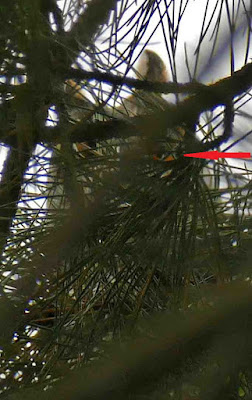 Later on by a single sycamore tree, I could hear Redpolls and then watched four Mealy Redpolls (three adult males and 1 fem.) feeding on thistles about 100yds away – so wonderful to watch, but they were only on the thistles for about a minute before heading off towards the south end. John and I got soaked completely in a massive rain deluge before heading back.

Drove to Holme to wait for the Sainsbury's shopping delivery for my Mother, so that I could unpack it for her as she is not fit enough to do this herself at the moment. Unpacking the car when I got home wasn't funny at all and took ages to sort out. Shoes were soaked right through (funny waterpoof shoes!) as was rucksack etc. Washing machine on and everything cleaned up and on radiators, mean't I could then fall into the land of nod!
Posted by Penny Clarke at 23:59