TWITCH to Kington Golf Course, Bradnor Hill, Herefordshire to see a MEGA Cream-coloured Courser and then on to mid-Wales!!
If a mega turns up somewhere in the UK I know that Andy W. and crew sometimes have a spare seat! Luckily for me they did!

I was supposed to drive to Andy's house arriving at 5.45am, but was absolutely horrified when I had turned alarm off and woke up at 5.47am!!! So had to have a very quick re-plan and instead I drove to a village near Thetford, where I left my car to meet and join up with Andy and others who were travelling south on the A11. I was slightly worried about leaving my car, but it was fine when I returned! Obviously it would have been better to have turned up at first light, but it wasn't possible for any of us to do today. We left Thetford/A11 at 7.20am. I had dressed for a cold day, but had bought lighter clothes in case it got hot. On route at a loo/petrol stop, I had no choice but to change my clothes - it was baking hot - a huge contrast from fog and cold yesterday in Norfolk!

The scenery in this area is spectacular - we arrived at Kington Golf Club, Bradnor Hill at about 11.45am. We drove approximtely half a mile past the club house and parked on a wide, grassy verge further up the hill. (don't park at the Golf Club house carpark unless of course you want a very long up hill walk). I just couldn't believe the views from here and it was unbelievably hot! Within a minute of getting out of our car we saw a Red Kite and a Redstart sitting in a tree! I realised I wasn't as fit as I as I thought, as we walked up the hills to the 8th fairway known as 'Hill Top" where the bird was. All the golfers were extremely nice and seemed fine about us birders traipsing over their golf course, so a huge thank you to them! But, be warned, watch the golf balls! There is a seat on one of the hills in memory of someone that was killed by a flying golf ball! As we got to the top of the hill, there were about 50 birders, lined up with scopes. We first saw the CREAM-COLOURED COURSER at 12.03pm precisely! My goodness this bird was something else - an outstanding bird. The black eyestripe and white supercilium against the sandy, orangy coloured body was just simply striking - this bird was AWESOME! I didn't see it fly, but it did have a few wing stretches, which revealed the black underwings. It ran like a roadrunner - spectacular to watch. This bird is the first UK Spring record! Most of the time the bird remained on the edge of the bracken and only occasionally came out onto the grass. The heat haze, time of day and distance of the bird was a nightmare for photography and I only obtained out of focus, distant shots. But, even though it was hopeless for photos, as a birder the views were stupendous. Everyone was perfectly behaved apart from one photographer who walked and joined golfers to get a very close picture and has posted his pictures on a well known website - people are congratulating him on his pictures - they are indeed top notch pictures, but many of us could have obtained the same, had we also walked that close to the bird, perhaps we all should have done! Other birders/photographers were cursing etc at the fact he had walked way out in front of everyone. You have to be courteous to everyone else in this situation. We were hoping that the golfers would walk behind it to assist it run in our direction, but this was not to be! I might hire some clubs for the day and go back!!! Most certainly the best bird I have ever seen and on the highest golf course in the UK - the most spectacular setting you could possibly imagine - awesome views for miles and it was an incredibly hot day to boot! An unforgettable experience! We stayed until about 2.30pm if I remember rightly - very difficult to leave. Walked back to the car and had a quick sandwich and left.

Gigrin Farm, Rhayader, Powys, Wales
Red Kite Feeding and Rehabilitation Centre
This place was something else! Red Kites are fed daily at 3pm. With aerial acrobactics the Red Kite's compete with Common Buzzards and Ravens in a feeding frenzie in front of several hides. A Photographer's dream! I was awestruck at this spectacle - I didn't know where to look next. The birds soared only feet away from me as I sat in the hide! There was also two Leucistic Red Kite's. I got a ton of photos on the camera! The light was perfect with blue skies. See the website here. Would loved to have stayed longer, but we had to move on to our next and final stop before returning home. 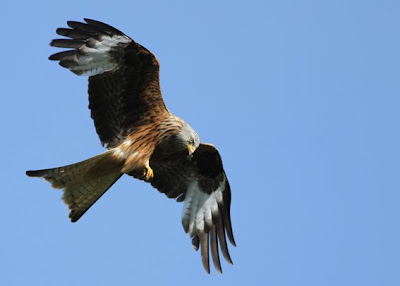 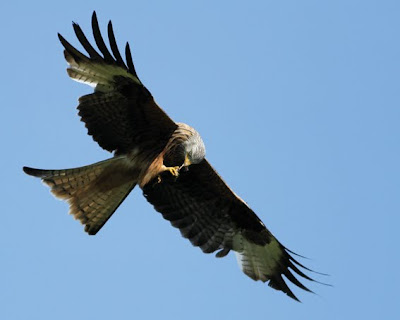 Red Kite at Gigrin Farm.
Elan Valley Estate
This place was stunning – what a day! "The Estate consists of rounded hills dissected by steep valleys, many of which are covered in deciduous woodland dominated by Sessile Oak" The website is here and link to the section on birds is here.

We parked in the carpark adjacent to the Visitor Centre and Cafe and had a wonderful walk alongside the wide, fast running river searching for woodland birds. The scenery was breathtaking and the light was beautiful. As we walked along the edge of the river, water sprayed and trickled over boulders and fallen tree trunks and it looked magical. We saw some spectacular birds here, the best for me being a Dipper.

Can't remember what time we left exactly, think it was about 6pm. We bought chips in the village of Rhayader and then travelled home. My car was still there when we returned, thank goodness! I then travelled home, arriving about back at 12.30am.

Thank you very much to Andy for driving all day!

PHOTOGRAPHS TO BE ADDED
Posted by Penny Clarke at 14:41