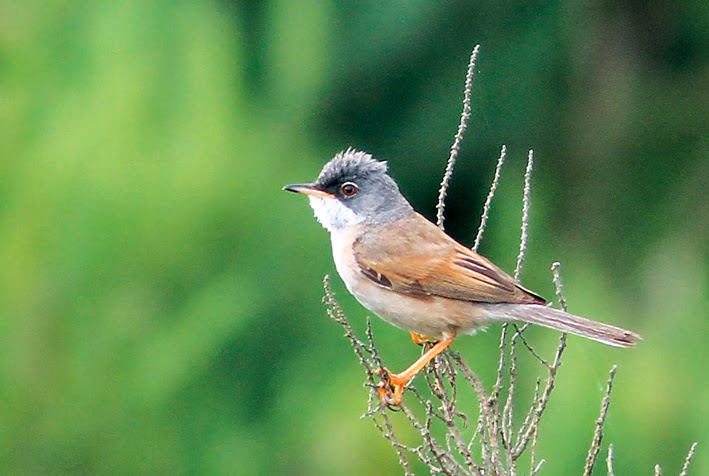 Got up at 2.30am, yes you heard correctly! Left just after 3am, arriving at Burnham Overy about 3.30am. Walked along the track in the dusk listening to Whitethroats singing away in the hedges. There was a faint glow of the rising sun as I made my way to Gun Hill. There was one other birder in front of me, who I found out a bit later had dipped the Spectacled Warbler last night, when it didn't show after 5.30pm – my guess is, that he had slept in the car overnight, what we do for birds!

As it got light, I was fully expecting to hear the Spectacled Warbler singing (as it has been early morning), but nothing, nothing at all. Oh dear, the 'Friday night bunk'? Ok, so I had seen the bird, but there were lots of people that hadn't, we must remind ourselves that this bird turned up last Monday lunchtime and many people would not have been able to get here until the weekend. A handful of birders were here early too, but we found no sight or sound. I temporarily gave up and walked up to Gun Hill itself to find other birds, concentrating on the bushes on the seaward side of the hill. There was a skulking LBJ in those bushes, which I spent ages trying to nail – I refused to leave until I had, this could be it!? Eventually it showed its face.... a Hedgesparrow!!! Oh well! Other than that, only a few Linnets were seen and the Little Terns. I trudged back west, towards the Spectacled Warbler spot and seeing a man waving at me, I realised they had re-located the bird at 5.30am, excellent!

I sat on the slope of the hill overlooking where this magical bird was building his nest for his potential female. Although it was fascinating to watch, it was equally terribly sad to know that all his hard work was in vain, terribly sad indeed. The Spectacled Warbler got into a nice little routine of flying west to gather material, fly back to 'nest' sueda bush, dive in, place nesting material, pop out for a few seconds, sometimes with a burst of song as if to say, "here I am Mrs... where are you?" and so on. Occasionally it would fly east behind a big privet bush and then back across in front of us. There was a fairly big crowd here now including well known photographer Dave Hutton, also Adam Archer and loads of others. There was only one moment when the bird sat out in the open, on top of a sueda bush for quite a while singing – this resulted in cameras going off like wildfire! The best pictures will be from the bigger lenses obviously, closer to bird, sharper etc etc. Dave Hutton has the best picture I have seen here. Part of the crowd (furthest away from me) were incredibly noisy, loud laughter, talking, almost shouting at one point – ok, so the bird didn't seemed bothered and carried on with its routine, but for goodness sake, did they really need to be that loud? No, they didn't. The skies were darkening, as forecast... suddenly with no warning, heavy spits of rain fell and there was panic and scrambling to cover cameras and optics! 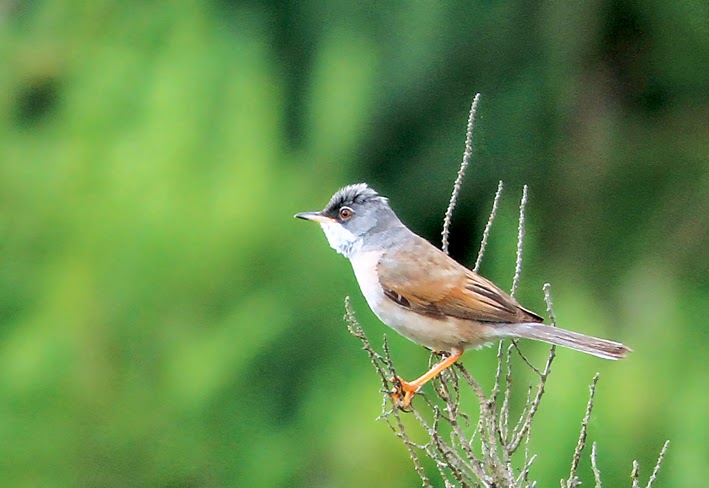 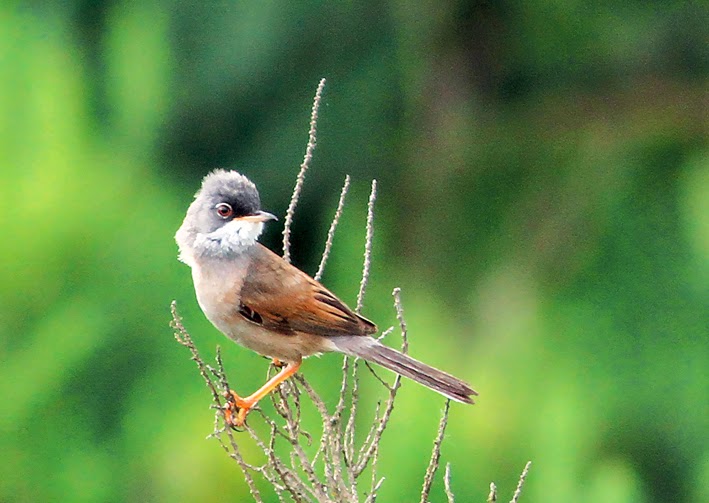 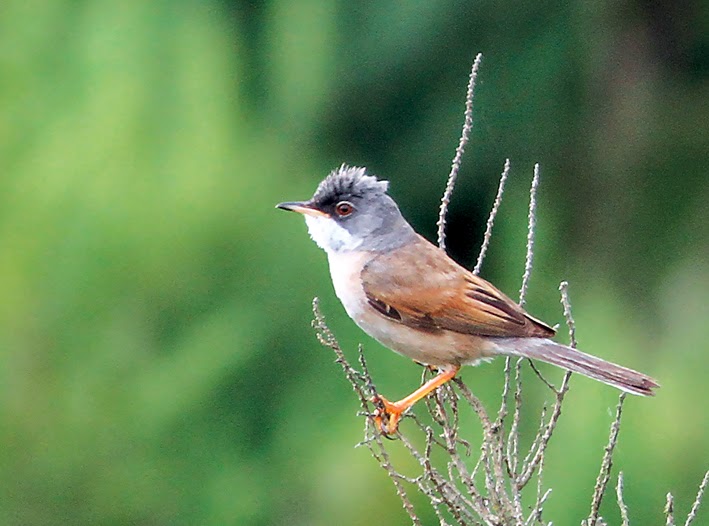 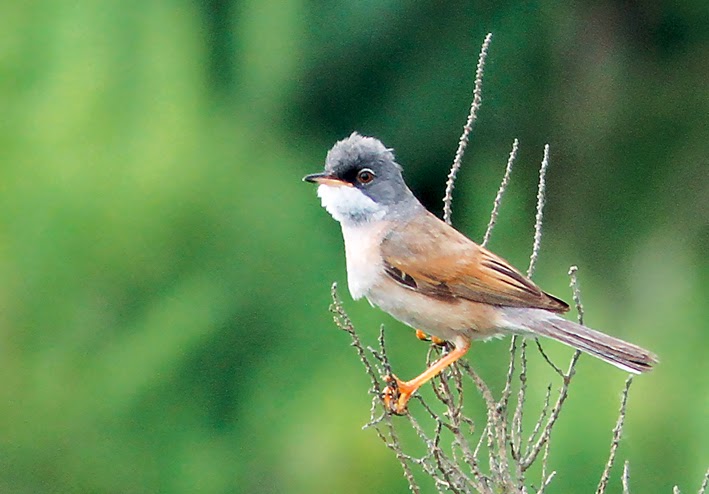 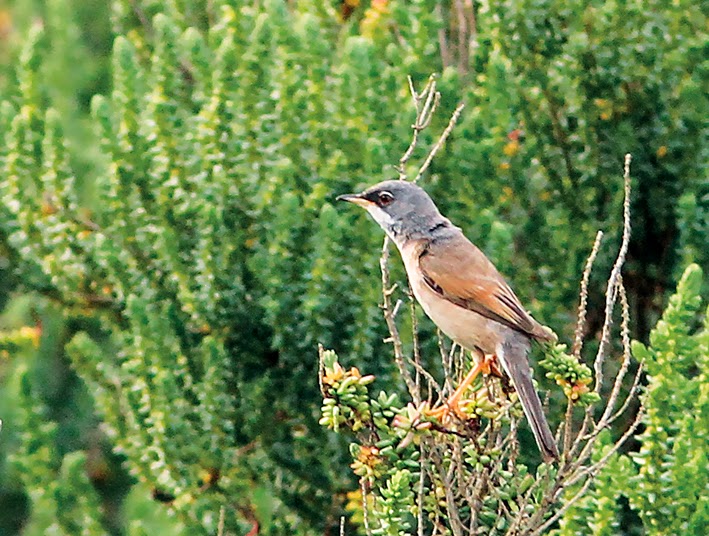 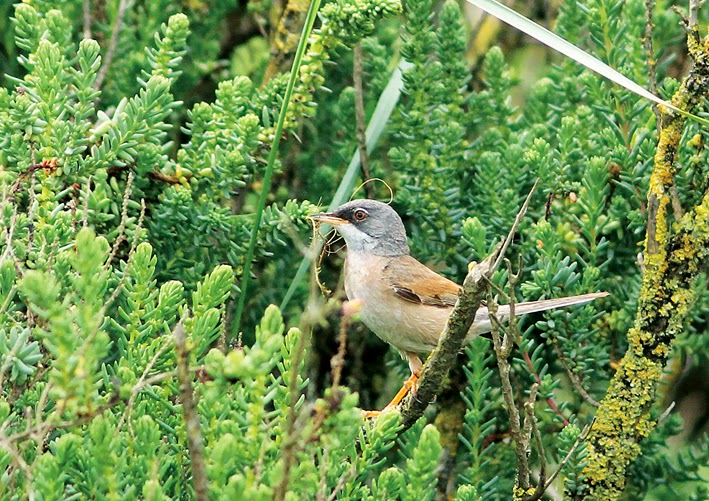 With skies now black with rain and rumbling thunder, I decided it was a good time to depart! Had a quick look in the little apple tree by the main concentration of bushes at the end of the boardwalk before I walked back along the top path, but only found Linnets. Lashing down with rain now and I was dripping wet. Just before the pool east of the main path there were two Little Terns which normally I would have photographed, but wasn't getting the camera out in this!

Back at the car, it took a while to work out where to place all my wet gear, coat etc! I know its a long way to go for a cheese scone, but off I went to Cley Visitor Centre NWT to sit in the dry and enjoy a scrumptious cheese scone with butter and pot of tea, overlooking the marshes, lovely! I decided that I wanted to look for birds at the old piggeries at West Runton (where the Black-headed Bunting was), so off I went. John F. joined me and we spent a good while searching for rares along the fields and cliff top, back along a hedge-lined footpath to the main road and then worked our way round an allotment area with small hawthorns, which looked good for a RBS, but nothing much seen, apart from a few Blackbirds collecting worms, Skylarks, Meadow Pipits, Linnets and Whitethroats. I departed from here and returned to Cley and parked up at Coastguards for my lunch and had a very long snooze for several hours! James McCallum's car was here... now I needed to plan for the afternoon – should I walk Blakeney Point and hope some amazing bird had dropped in with all the deluge? Or should I return to the Spectacled Warbler for evening photography and more? I decided I just hadn't got the energy to walk the 'Point' and just hoped that James didn't ring out a mega later on! I love the walk to Gun Hill, Burnham Overy Dunes without there being a good bird there, so decided to return again!

I luckily managed to find a parking spot on the main road parking area for the walk out to Gun Hill. A Marsh Harrier flew south overhead. I passed Holme birder Robin Jolliffe on the way out, who remarked at my return again to see this bird – why not though, its a fabulous bird and I may go and see it again (as I write Monday morning). On reaching the crowd, which was only a handful of people now, I sat in the same spot again and waited. The bird had not been seen for a while, but I waited patiently and expected to see it soon. I noticed on the pager yesterday, that the bird had not been seen after 5.30pm(ish) last night and obviously has become very elusive in the evenings. I only saw the Spectacled Warbler a couple of times, distantly and very briefly and didn't get a single picture this evening. A couple of birders turning up later, dropped down from the boardwalk and walked right through the midst of the sueda – unbelievable!!! Even if they didn't know the area, you would have thought they would have followed the path along the bottom of sueda, rather than walking through it. They did then divert though, when they could see us all looking in their direction. It was a beautiful evening and the light was perfect. It was around 8.15pm when I made my way back. 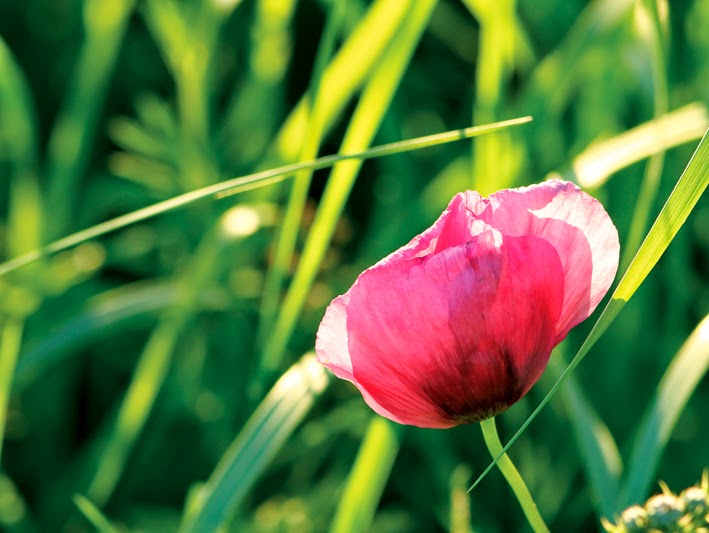 Poppy below the sea wall at Burnham Overy. 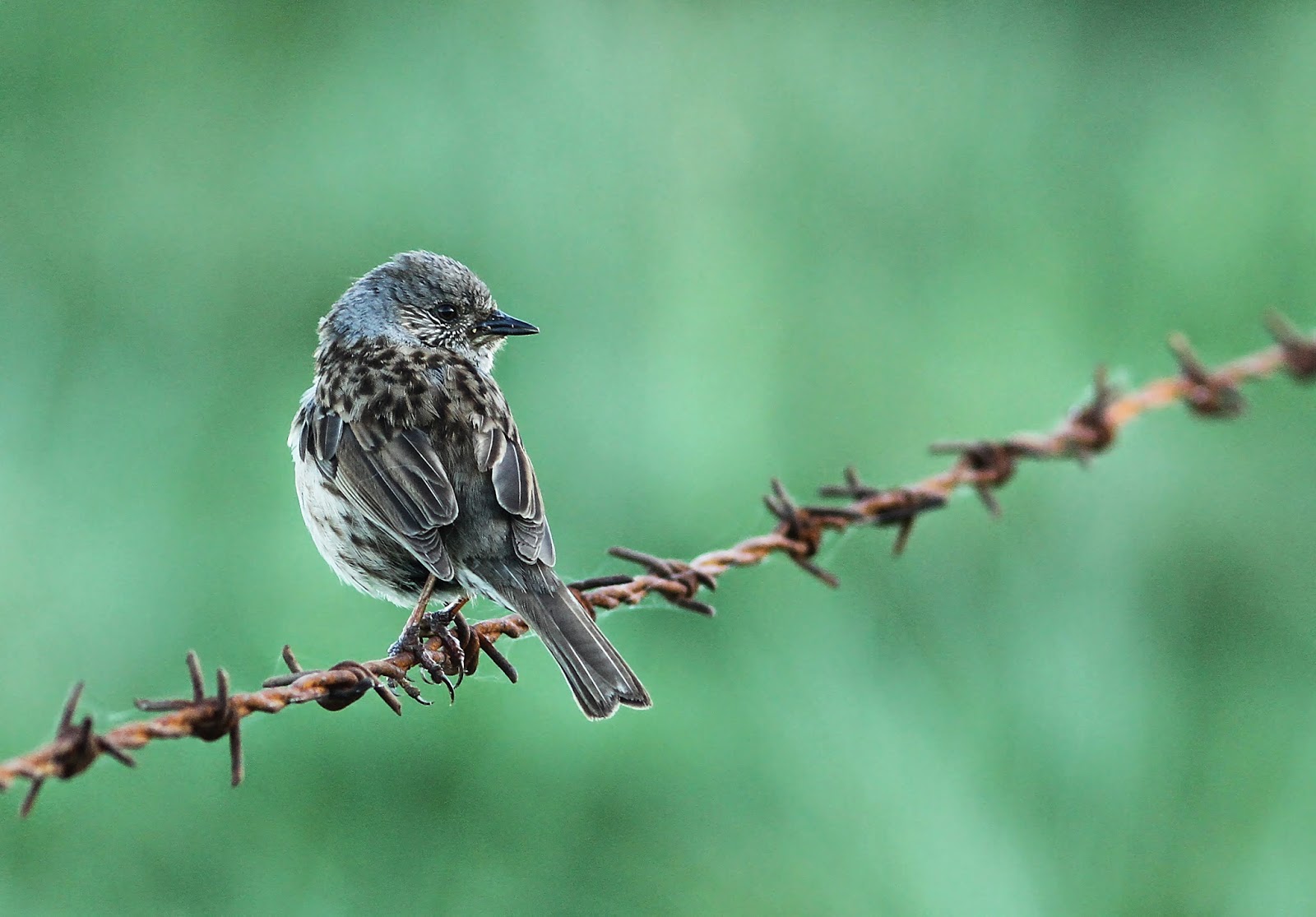 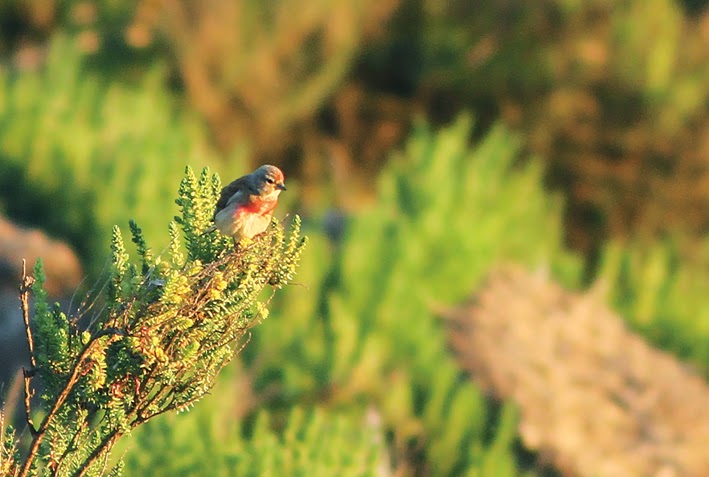 Linnet in the sueda, below the sea wall.

A Spoonbill flew east overhead and a Barn Owl was hunting over the fields, east of the path. There were some very bright Linnets in the sueda bushes just below the path, Reed Buntings and Sedge Warblers were singing away and lots of Redshanks were calling. The day ended with a glittering sunset over the harbour. On the way home I saw a Little Owl sitting on a tree stump just outside Stanhoe. What a fabulous day! Felt exhausted when I finally got home. 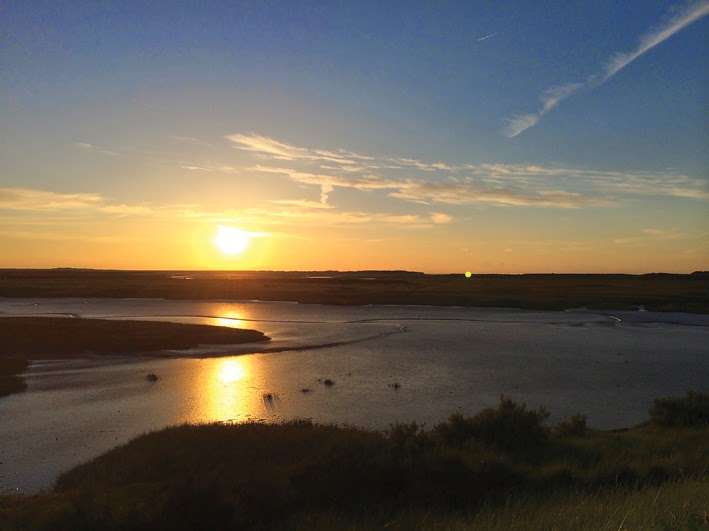 MORE PICTURES TO BE ADDED LATER
Posted by Penny Clarke at 23:38