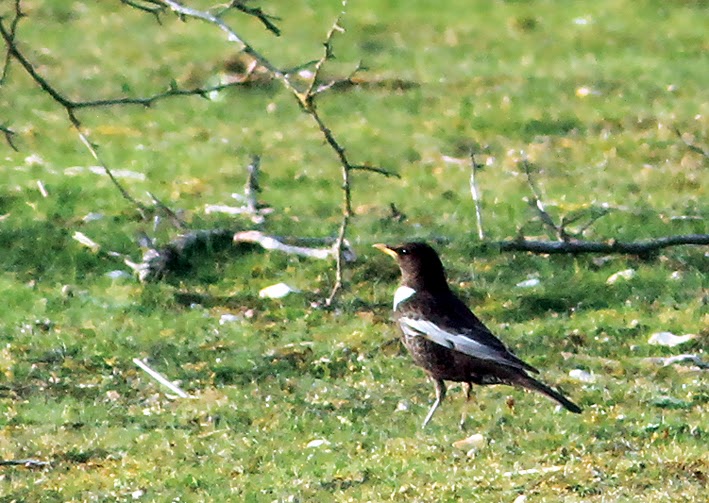 RING OUZEL
One of nine this evening at Snettisham Coastal Park

After being at work all day, I just had to get out birding to join in with the Ring Ouzel festivities! The pager read that there were 28 Ring Ouzels at Roydon Common today – what a fantastic number! I whizzed home and had lentil soup with two slices of toast (all weighed out properly – see yesterday's post). A beautiful day again and a wonderfully sunny evening. Cruised to Snettisham and parked up at Snettisham Coastal Park in search of Ring Ouzels at 6pm. A very kind birder I quizzed, told me exactly where to find them, he also said there was a Cuckoo around too. 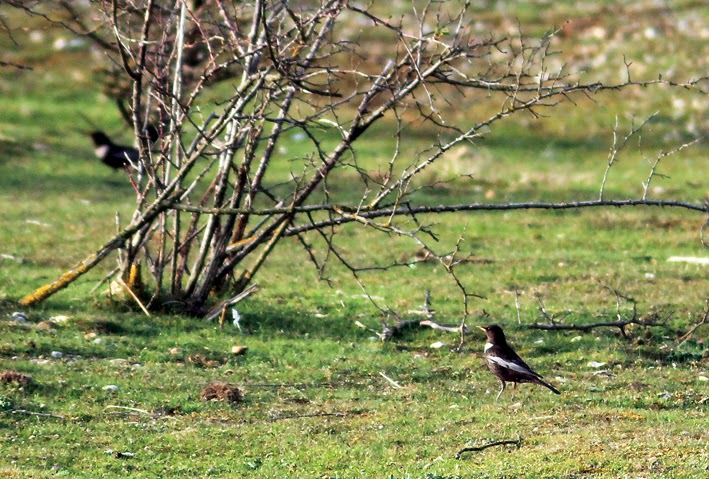 I was so pleased – it was so easy! Walked up to the big clearing and I could hear them first and then suddenly, one by one 9 Ring Ouzels appeared alongside the bottom of a row of bushes, hopping around and looking nervous as Ring Ouzels do. They were very wary of me, so I sat down by a bush, put my hood up and waited to see if they would come closer. They started to settle and moved a tiny bit nearer, when suddenly I could hear the familiar panting of a dog. It was extremely silly of me to sit down, as suddenly I was eye level with a black labrador – it seemed ok though and moved away from me fairly quickly, but as I turned I could see a not so friendly looking chocolate brown labrador heading straight for my head, so I got up sharpish, holding my camera up as high as I could. 'Sorry' said the owner. I pointed to the Ring Ouzels that I had been watching and trying to photograph. The owner and two loose dogs then proceeded to walk straight through the middle of the Ring Ouzels scattering them in all directions and away!!! I wasn't that angry, this is normal behaviour at Snettisham Coastal Park – there are far more dog walkers than birders. I so wish this coastal park could be a protected reserve – a 10ft fence all the way round and out of bound for dogs – wouldn't that be fabulous and being able to walk without having to dodge all the dog crap! Oh well, dream on Penelope! I met two birders who introduced themselves to me (sorry can't remember your names) who asked about the Ring Ouzels – I explained what had happened and I hope they got to see them, but I didn't see them anymore after the dogs disturbed them. I listened hard for the cuckoo, but no luck or with trying to hear any Grasshopper Warblers (this is a good spot for them).

I carried on walking east through the paths and clearings. in hope of finding more Ring Ouzels, but was unsuccessful. I had a wonderful selection of birds though: my first Sedge Warbler this Spring, singing away in a reed bed, at least half a dozen Cetti's Warblers singing – it seemed as though they were everywhere! Also Chiffchaffs and Willow Warblers singing, flock of Linnets and Goldfinches, 2 Swallows hurtled through west, 2 Grey Partridges and 5 Wheatears in the big clearing. Also Water Rail calling and a single Reed Bunting perched on a bush. There were a few Blackbirds around and Black-headed Gulls were heading west overhead in the blue skies. I left around 7.30pm.

Drove to Hunstanton and did the shopping for parents and delivered to Holme. Father was in a very good mood, smiled and seemed pleased to see me, which was a massive improvement on last week's behaviour!!! He even apologised which I wasn't expecting, as I didn't even think he would remember about his bad mood last week. Chatted to him all about the birds being seen in Norfolk and told him about the Great Blue Heron and the Great Spotted Cuckoo and he looked quite interested. With the forecast NE winds this weekend, my Mother predicted Bluethroats for Norfolk, so we shall see!
Posted by Penny Clarke at 22:20