I woke up before dawn and decided to get up. But..... when I glanced in the bathroom mirror, I took one look at my tired eyes and crawled back into bed! I didn't sleep brilliantly at all in my new luxury bed last night – I suppose it takes some getting used to. I snoozed and finally got up at 7am.

Ringstead
I had already decided to bird locally, rather than bombing off to Cley. I was at Thornham Road, Ringstead by 8am in search of Ring Ouzels. It was a beautiful morning, but the weather forecast predicted high blustery winds by late morning/lunchtime, so I needed to make the most of the still and sunny conditions! 2 Yellowhammers in the hedge along with a Hedgesparrow. Skylarks were singing and both Grey and Red-legged Partridges were seen. The usual Pheasants were dotted around the fields.

Thornham
I scanned the play area around the back of Thornham (where there was a Hoopoe once) and found 4 Pied Wagtails, 2 Blackbirds collecting worms and 3 Woodpigeons. 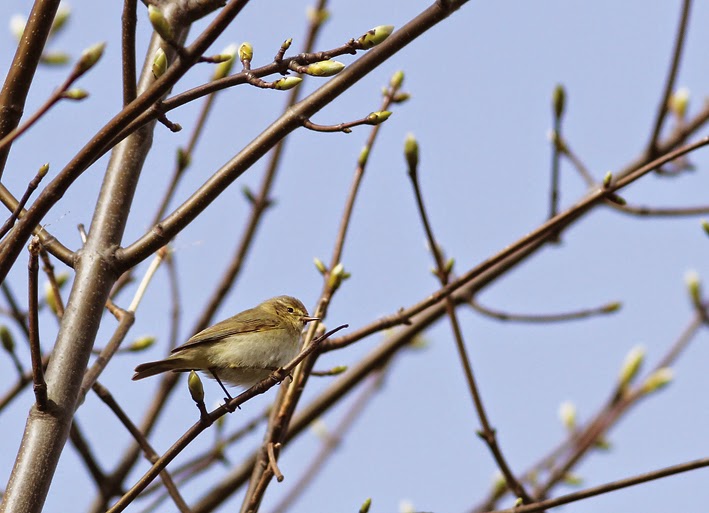 Brancaster Staithe
Parked up at Brancaster Staithe Quayside and made a coffee, enjoyed with ginger biscuits! A Song Thrush was feeding on the grassy slope next to my car along with Greenfinches, Goldfinches and a Hedgesparrow. I headed off west along the raised boarded coastal footpath (heading back towards Brancaster). This is a very pretty walk and popular with families and dog walkers. With pussy willow out, daffodils and lots of shrubs coming into bud, it all looked very Spring like. Watched and photographed a very vocal Chiffchaff in a large willow tree and also saw a Peacock butterfly. The wind had started to pick up. Lots of Brent Geese and Black-headed Gulls on the marshes, but no other birds seen at all. On the way back I saw my first Swallow this Spring – heading west over the reedbeds at 11.20am! A wonderful sight indeed and lifted my spirits a little. In the last garden just before I reached the end of the boardwalk I watched 2 Pied Wagtails, a Robin, Greenfinches and Goldfinches and a Wren. 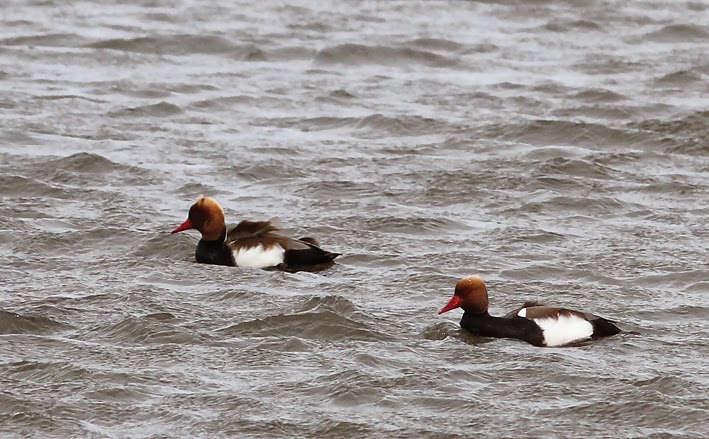 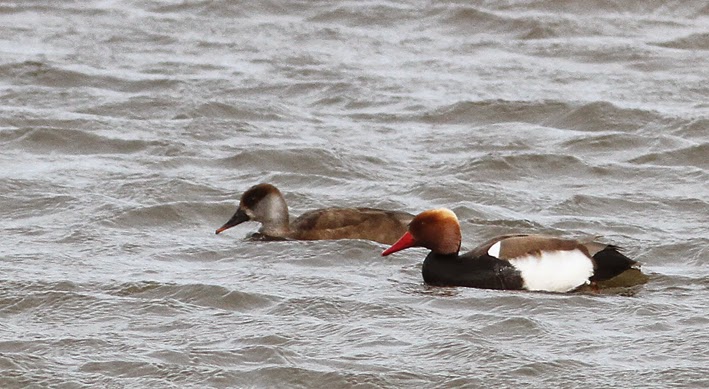 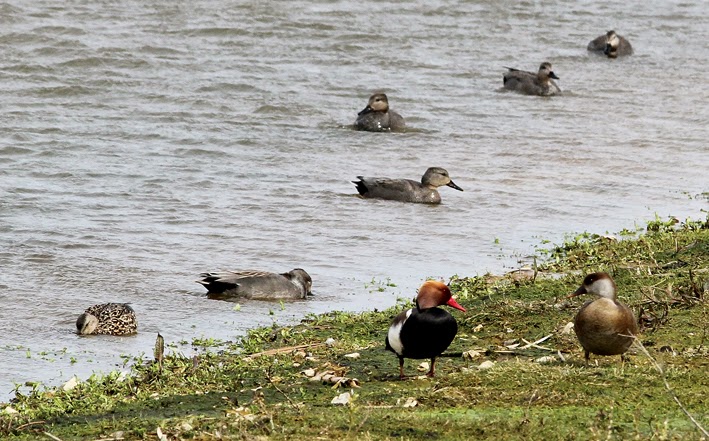 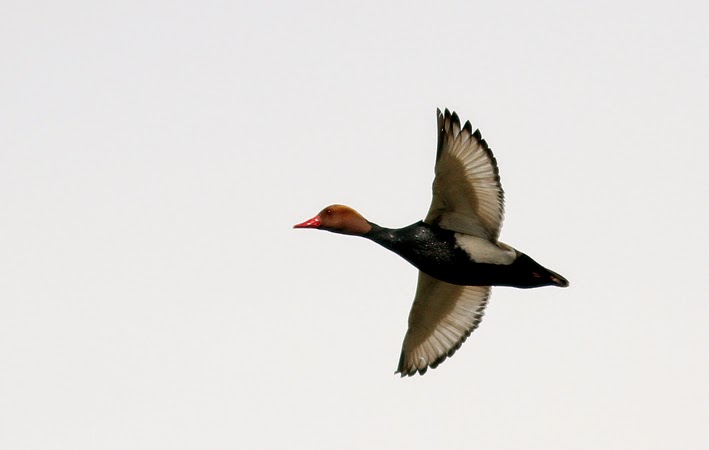 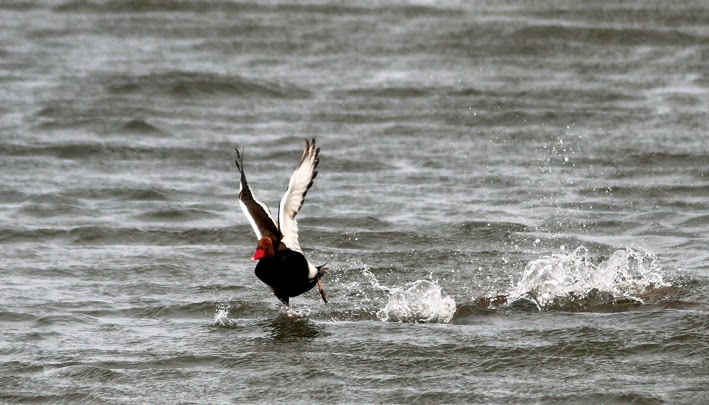 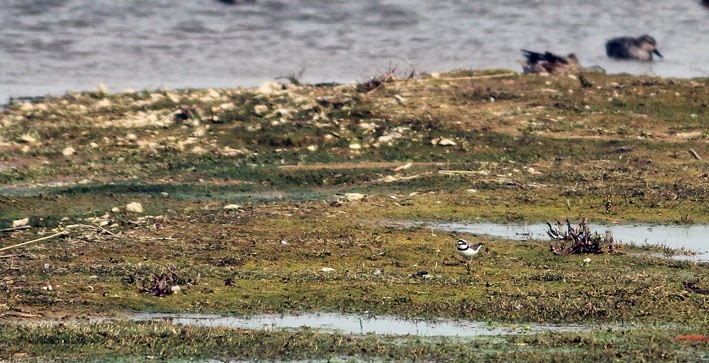 
Titchwell RSPB
Initially I was going to have lunch here, walk the Fen Trail and then spend the rest of the afternoon at Holme Reserves, but birds change everything you plan!

I sat in the 'Feeding Station' enjoying cheese & onion potato skins with coleslaw and salad. It was great to get out of the strong winds for a while. I was tempted by dessert as always and ordered a 'special' on the board: Pineapple and Toffee Cheesecake which had been home made – OMG it was scrumptious, so congratulations to who ever made that. Walked around the Fen Trail and I heard and watched Chiffchaffs, listened to a Willow Warbler singing and a Sparrowhawk flew through! My second Swallow of the day flew over west at 2pm and then another two shortly after that and then a steady stream of Swallows continued throughout the day until dusk. Patsy's Pool was alive with birds including 5 Red-crested Pochards, 1 Pochard, 1 Snipe, loads of Gadwall, Teal, Mallards, Mute Swans, Greylag Geese, 2 Little Ringed Plovers, 2 Pintails, 1 Lapwing, 1 Little Grebe and Tufted Ducks. A Curlew flew over west and a Marsh Harrier was over the far reedbeds. The pager bleeped up with Green-winged Teal from Parrinder Hide, Titchwell! Very handy indeed! Back at the Fen Trail I photographed what turned out to be an interesting Willow Warbler with rusty coloured legs – it had me going for a while, until I sought further advice later on. 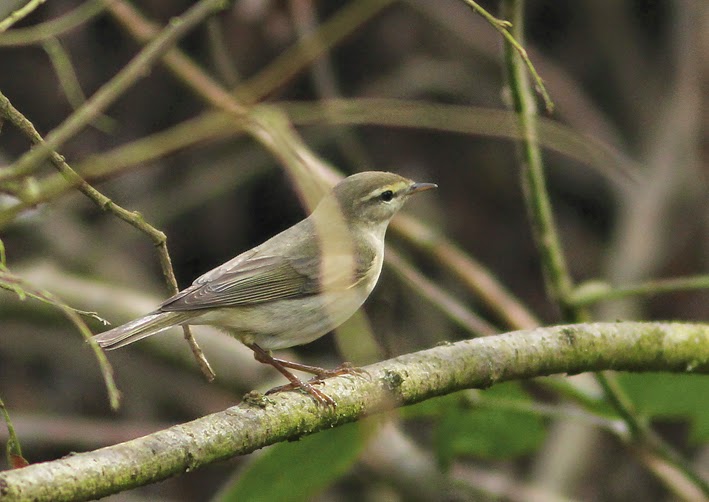 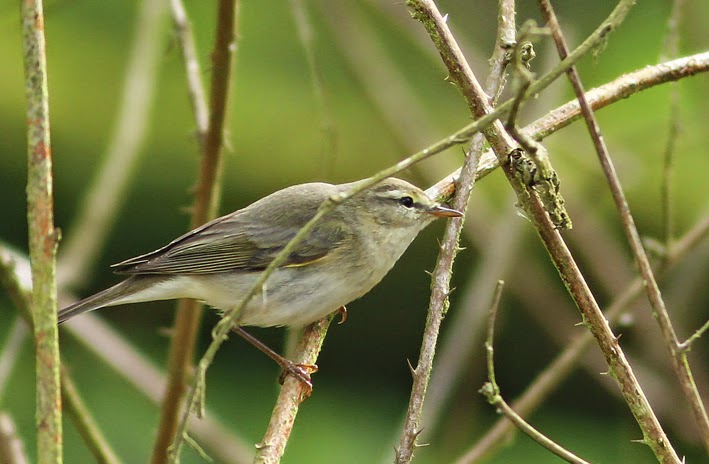 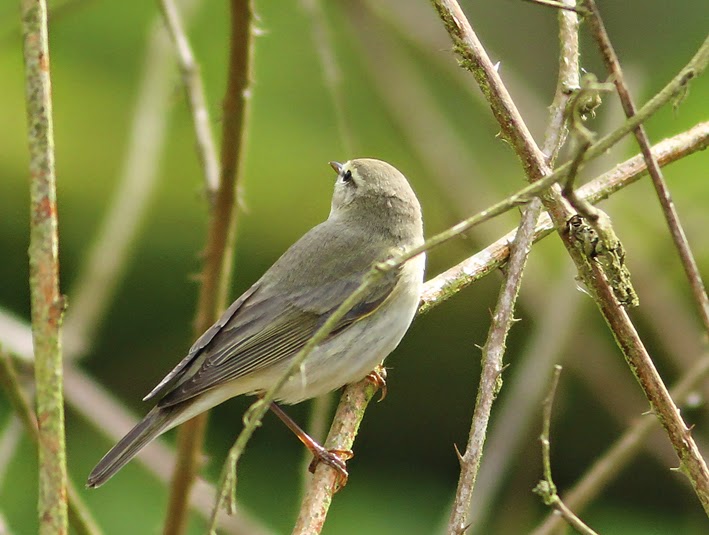 I walked along the main path towards Parrinder Hide – the skies were filled with black clouds and I didn't think I was going to make it the hide, before the heavens opened. I could see several teal by the reedbed near Island Hide, so decided rather than getting wet, to dive into this hide. There was one birder in here and he was watching the Green-winged Teal!!! Thanks Tony! I rang out the sighting to RBA. Used my iphone through my new Swarovski scope for the first time, but I just couldn't get a complete shot of the teal – it was so busy feeding, not once did it keep still – I ended up with either a tail sticking out of the water, or just the vertical white stripe down the breast! But I did succeed with a nice little phone scoped video, even though the light was now dire. Lots of Swallows hurtling through west. Marsh Harrier over the reedbeds and Avocets were in good numbers. 2 Little Ringed Plovers flew past the hide going south. It was nice to catch up with Pat & Geoff and Pat did a good job of cheering me up, thanks. Walked back in spitting rain with T.G to the carpark.

Choseley Barns
The wind was howling and it was freezing cold – felt like winter! 2 Grey Partridges and 2 Red-legged Partridges in the fields opposite the barns. A Marsh Harrier glided over and in the field at the bottom corner I watched 2 Pied Wagtails, a single Linnet and a bit further along the road a single female Wheatear perched on a clod of mud looking pretty fed-up with the shocking weather. 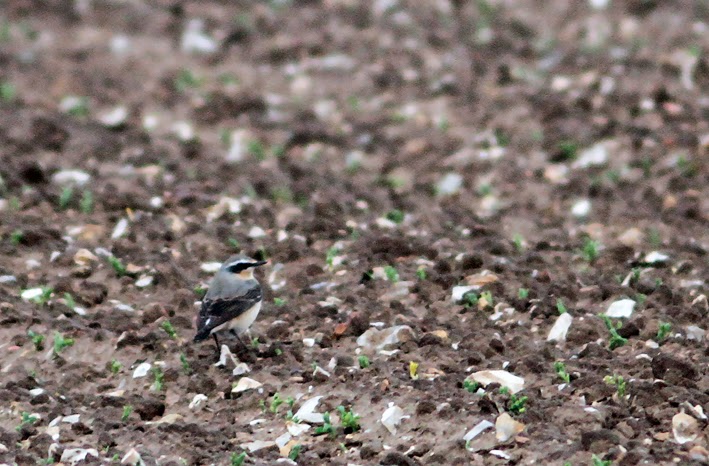 Wheatear in the cold wind and rain at Choseley Barns.

Abbey Farm Hide, Flitcham
It was now 7.30pm so I didn't expect to see much to be honest. Best bird was a Blackcap singing. Also saw Hedgesparrow, Shelducks x 2, Gadwall x 2, Red-legged Partridges x 2, Coot, Moorhen, Greylags, Canada Geese x 2, Jackdaws, Woodpigeons, Oystercatchers, Lapwings, Pheasants, Egyptian Geese x 2 + 2 goslings and a Wren feeding in the gorse bush, right beneath the hide window. Also 3 Muntjac deers were feeding just left of the hide. No sign of Little Owls, but I note in the sightings book that they were seen yesterday. Left at 8pm – 12 hours birding!