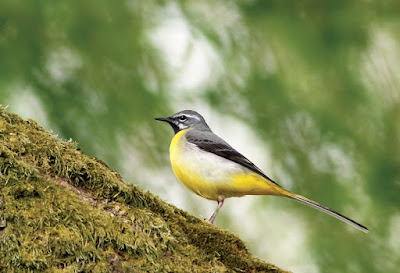 GREY WAGTAIL
Perched on a willow tree at Sculthorpe Mill

The weather was far better than was forecast for this morning. I started the day with brilliant sunshine, but very strong winds. It turned very nasty later though, with lashing rain, increased wind strength and much colder. I hadn't planned the entire day, but know I wanted to head to 'Natural Surroundings' at Glandford, in an attempt to look for yesterday's Wood Warbler. I really wish I had gone yesterday now, but I had to complete some important jobs, so ploughed on. In any case, very few people saw this stunning little warbler yesterday, so don't suppose I would have been lucky anyway. Wood Warblers are just magical, with bright lemon yellow upper parts, throat and chest and contrasting white underparts and their distinctive trilling song is to die for.

Sculthorpe Mill
I had a wonderful time here, in fact this was the highlight of the day. Parked the car in the pub car park and walked down to the mill stream, sat at the picnic table and waited. 2 Drake Mallards and 1 female were having a massive fight in the mill pond – this subsided eventually. Blackcap singing in the willow tree and with the rippling water over the stones in the sunshine, it all looked very idyllic. Suddenly a streak of grey and yellow bounded across the water and under the bridge and there it was – a stunning Grey Wagtail! In fact there was a pair here and I spent a long time photographing them as they collected food, posed on walls and best of all perched on a leaning willow tree as a treecreeper would look! I could have stayed all day to be honest – so beautiful here. Got some good flight shots too – I was very pleased with the morning so far. Highland cattle were in the field adjacent to the mill. I watched a Blackbird and a Goldfinch collecting food for young, but no other birds of note seen here. 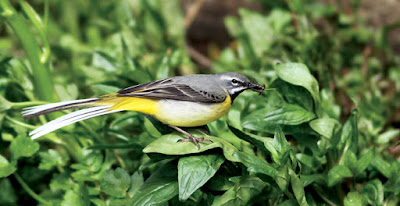 Natural Surroundings, Glandford
I walked to the end of the car park by the 5-bar gate and followed the track up hill – who said Norfolk was flat! It was quite a climb up into the woods and the walk was stunning – bluebells adorned the slopes and Orange Tip Butterflies set the scene. It was so beautiful here and I felt quite ashamed that I had not explored this area before. The views from the top were wonderful and the walk back down was equally so. Chiffchaff and Blackcap singing, no hint of any trilling Wood Warblers though!

Had soup and a roll in the cafe, resisted the home-made cakes and then the heavens opened. Took pictures of the amazing gunnera plants that have just started growing and then left.

Glandford Ford
Watched another pair of Grey Wagtails busily collecting food and heading back and forth to the mill. Sedge Warbler singing by the stream, Blackbirds x 2 in the horse paddock, 2 Whitethroats in a bramble and that was about it here.

Cley NWT Visitor Centre
To use the posh new loos! But also far more importantly, had a long overdue catch up with Pat D., whom I have not seen for months and months – wished him happy new year! He has been going through a really rough time too and we sympathised with each other's situations.

Moved my car to car park by Old Woman's Lane and scanned the cows for Yellow Wagtails – but none seen.

Cley Coastguards
It was so peaceful here, there was only one other car in the car park! Nothing of note on the Eye Puddle other than a few Linnets and a Shoveler. Also Brent and Canada Geese in the field. Blakeney Point Ranger Ajay turned up in a little buggy type vehicle – I walked across to say hello and asked if there had been anything exciting turn up on BP – the best they had had recently was a Willow Warbler and Chiffchaff in The Plantation – 'we're waiting for the big one' he said. As I sat in my car to warm up, a Meadow Pipit flew down to have a bathe in a puddle and then had a preening session afterwards, which made some nice pictures from my mobile hide! The NWT have a new green pay hut in the carpark, as the previous one was stolen recently. I couldn't believe that, when I read Ajay writing about it in the Blakeney Point Blog – how did anyone get away with stealing that!? Obviously it must have done under the cover of darkness.

Walsey Hills NOA
Had a mooch round here, but didn't find anything really. The rain fell torrentially when I was round the back of Walsey, so made a beeline for the NOA hide (kept locked) which I never go in, but very handy when its raining. I couldn't open the hide flaps that faced Snipe's Marsh as the rain just lashed in there, so opened the side flap overlooking the yellow gorse and the East Bank/Arnold's Marsh. It was nice to sit in the dry, however it was freezing and had to put my gloves on. I was so pleased when suddenly I spotted a Spoonbill 'spooning' in 'The Serpentine' at 4.20pm – lovely! There were at least 5 Little Egrets, 2 Grey Herons, Greylags, Canada Geese, Mute Swans, Lapwings, Avocets, a Kestrel hovering over the East Bank and lots of Swallows, Sand Martins and a few Swifts flying through west. Bumped into Mark G. who like Pat, I haven't seen in months, so had a catch up with him. As we stood looking at the feeders, a blackbird with white in both wings appeared briefly, which explained my recent sighting of what I thought was a 'rare' the last time I was here!

I couldn't decide what to do next, I had planned on going to Kelling Water Meadows, but as Mark said, with these winds and rain etc there wouldn't be much to see and the day was disappearing. Went to Coastguards, had a coffee and had a lovely time photographing a very photogenic male Wheatear in the car park, who obligingly walked towards me – there was also a second one on the marsh, along with 2 Golden Plover, presumably the same Shoveler that I had seen earlier and more Linnets. Mark then left to walk along Beach Road and I continued taking pictures.

East Bank
After a tip off from Eddie that 4 Spoonbills had headed for 'The Serpentine', I left and started to walk The East Bank, but then found out that the Spoonbills had then left and headed west. I didn't walk too far along the bank as the wind was wickedly cold.

Bayfield Hall – River
Stopped here briefly to scan the fields. Lots of cows with inquisitive calves, 3 Grey Herons, Tufted Ducks, Jackdaws and hirundines. Suddenly I spotted a Common Buzzard with prey in its talons, sitting on big round post at the edge of the river! I decided this would make a fabulous phone-scope video and rushed back to my car to get my gear. I had just set it all up and was just about to start the video, when the cows got spooked by something and all lurched forward running and this in turn spooked the buzzard who flew off clutching his heavy prey, which looked like a rabbit or hare. I was gutted, as this would have made fantastic footage, oh well.

Drove home in torrential rain, which then stopped when I reached the Fakenham roundabout. The sunset was so dramatic, I had to turn off down a side road to take some pictures. No rares, but a fabulous day all round.

PHOTOGRAPHS TO BE ADDED
Posted by Penny Clarke at 23:23