Mega Last Day Of My Holiday!!! 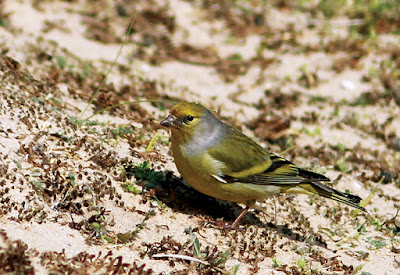 I didn't get much sleep last night – blogging etc but got up ridiculously early this morning. I was on the road to Choseley Barns for early morning viewing of the Dotterels. On route I saw two Turtle Doves fly off the road by the farm buildings, south of Great Bircham at 6.10am!

I was watching Dotterel and counted 24 of them, along with a few other birders here at this early hour. It was freezing cold first thing. The light is such much better early morning for viewing dotterel. They were much too far away for photography though, but I did manage to get some video through the scope. Also in the fields were 1 Ringed Plover, 3 Wheatears and both Red-legged and Grey Partridges and a few Hares. Good start to my last day's holiday!

Made my way to Titchwell RSPB and walked round the Fen Trail looking for Spotted Flycatchers or anything else exciting. The sun was out now and it looked like it was going to be a fabulous day. I was killing time here really, as had an appointment to look at a Park Home in Snettisham at 10am. Didn't see that much round the Fen Trail – Whitethroats, Blackcaps, Chaffinches, Blackbirds etc. I was just walking past the seat next to the water vole sign when the pager bleeped up with:
MEGA Norfolk, CITRIL FINCH, Burnham Overy Dunes at West end of Holkham Pines at 9.15am but mobile and elusive!!! OMG!!! Panic, think... at that moment I couldn't even visualise the bird exactly... had we had one before? Then it came to me.... Tommy Hyndman on Fair Isle had found the 1st for the UK on 6th June 2008. This must be the second then and a First for Norfolk to boot! I ran and ran, past the visitor centre, through the trees to my car and I was off!!!

How many annoyingly Sunday drivers to you need when you are trying to see a MEGA Bird!!! Overtaking had to be done. Slung the car on the main road at Burnham Overy and luckily I was in the first batch of people to arrive, so got a space – lucky me! Julian B. was a few steps ahead of me. Dave Holman and wife were just behind me. I decided not to take the scope, I couldn't be bothered with the extra weight. Of all the days to not have any lunch with me. Had sandwiches etc every single day in case I needed to bomb down Blakeney Point for a mega last week, but today all I had was a marmalade roll and 2 bananas, bloody typical! Threw them in rucksack, along with water bottle and camera and I was off down the track. It was hot now, really hot, far too hot to be rushing and its a long trek out to the west side of the pines. It would have been quicker to pay Lord Coke to park at Lady Anne's Drive, but I'm tight with parking fees! A Whimbrel flew west and saw a few Wheatears, Whitethroats and Sedge Warblers etc on route.

It was one of the most scary, worrying twitches I have been on when I first arrived. Only a handful of people had seen the bird in flight only and it took ages to see it. Massive congratulations and thanks to Marcus Nash the finder of this mega bird! Bumped into Ashley Banwell whilst searching for the bird and we were both astonished to see a line of people just sitting and standing on a dune ridge and not actually looking – Ashley made me laugh when he said "do they expect it to run up their trouser leg?"! Suddenly I saw a green coloured finch fly out of scrub and then drop into a gully – we followed it and Ashley walked down to where we thought it had landed – the bird then flew across and towards other birders and that was it! We had re-found and seen the CITRIL FINCH at 11.12am. The bird then got found in a gully full of scrub (the Subalpine Warbler gully) and it then flew back to its favoured area. A Hobby flew over and also a Siskin a bit later on. Richard M. and myself had the bird in another small gully to ourselves for a few seconds and I got my first proper views and pictures. It was full of shadows and quite dark where the bird was feeding and I had the camera on the wrong settings, so no sharp shots obtained, which I was very disappointed with, being as I had been so close, although I did get a fairly nice flight shot. This Male Citril Finch was absolutely stunning, I couldn't believe I was watching this mega bird! At 11.55am the bird was flushed.... no, not by photographers or birders... by a bloody rabbit that lolloped across where the bird was feeding and it duly flew off – big sighs from the crowd!

The bird had long intervals of going missing, but would then get re-found in the one of the large gullies – feeding on the ground, sometimes obscured, sometimes out in the open. I managed to get some fairly close shots later on in the early afternoon, which I was very pleased about. I also fell over at one point and got a really nasty thorn in my finger, which must have injected some kind of allergy or poison, as my whole hand ached like hell the rest of the day, until I dug it out later when I got home. More and more people kept turning up and it was a really good gathering overall and lots of banter and people catching up with old friends – an excellent day all round. I only heard one man that got annoyed because someone stood in front of him, apart from that it was most definitely one of happiest twitches I have been a part of. Bumped into loads of familiar faces including James Mc., Mick Sway and wife, Andy W., Justin, Connor R., Pete S., David B, LGRE (who arrived late afternoon and looked pretty frantic until he saw the bird), Andrew Bl., Richard M., Mark G., Steve & Sue G., Eddie M., Ian Pr., Ashley B. etc etc to many to name and loads of people from afar.

I was exhausted and unusually for me, I left early. Normally I would have stayed until dusk, but at 5.45pm I left and started the long walk back. Several Wheatears on route and a few Linnets. Looked in the good pit in the large valley before climbing up the big dune, but didn't find anything. At the bushes by the start of the boardwalk back, I looked towards Gun Hill – I wanted to go and search for birds, as I'm sure no one would have looked there today, but I just couldn't do it, far too tired. I sat by the apple tree for a while and watched a Chiffchaff flicking about amongst the blossom. I plodded back to my car – on route I heard a Bittern booming! Visited my parents for a short while, to show Mother all my pictures and tell them all about my first Citril Finch! What a day! A stunning end to my holiday!

SEE POST BELOW "NORFOLK NEWS" FOR MORE PICTURES AND VIDEOS
Posted by Penny Clarke at 23:57