Golden Day In The Rain! 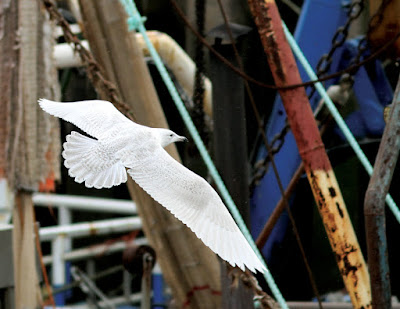 
The last time I saw the Iceland Gull at The Fisher Fleet in King's Lynn, it was blowing a gale and I could hardly keep the camera still. I re-visited today in much calmer conditions, but when I arrived there was no sign of the Iceland Gull. Another birder hadn't seen it either. Fabulous views of two Peregrines perched on the tower though!

Around 15 minutes later a birder pulled up in car, who told us the Iceland Gull was showing round the corner of the road on route to Lynn Point, only 50 yards from us and was sitting near the edge of the road and was so close he had to stand back with his camera! I drove round the corner and joined some other birders who were just leaving. The Iceland Gull was indeed very close! I got the camera out of the car and as the other birders drove off, I looked towards were the Iceland Gull had been standing and much to my massive disappointment.... it wasn't there any more! I presume the car leaving had flushed it possibly, who knows. I couldn't believe it, very bad luck. I returned to the fishing boats and the Iceland Gull was back on the far muddy slope, much too far away for my 300mm lens. Rob and Jill Wilson arrived. I think my camera or the lens, don't know which, is failing. I took no end of pictures and several flight shots and didn't get a single sharp shot – the same thing happened later on. 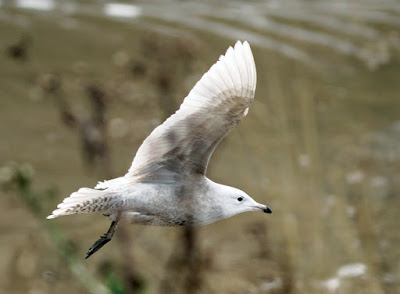 It was now raining and very very dull. I headed to Wolferton and got very very lucky with a stunning male Golden Pheasant parading around near the Give Way sign approx 100 yards along the Wolferton road from the A149. I had frame filling pictures, but again no sharp pictures. Very worried about my camera situation. Any kind millionaires out there want to buy me a new camera and lens please?!!! It was the best views I have had of a Golden Pheasant at this site – it looked fantastic, even in the dire light. 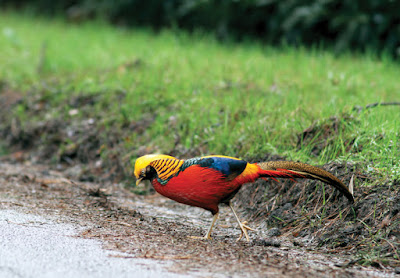 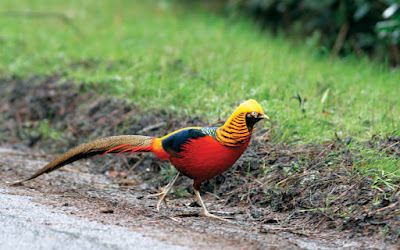 I headed towards Sandringham to the bird table, but no food on the table meant no birds, although I did see one Robin. About a mile past the Royal Saw Mill I saw four Grey Partridges in a beet field, so stopped to watch them for a while. A bird flew from the tall hedge into the beet field – I had no idea what it was, so waited to see if it appeared – I waited and waited. Frustrated at not knowing what this bird was, I got out of the car and walked to where I had seen it land – nothing. Whatever it was, had promptly vanished. I continued along the road to Shernbourne looking for geese, but didn't see any.

The light was fading fast and after a worried phone call from my Mother, I had headed to Holme via Sainsbury's to pick up a few things for her. Father had not spoken to her for around three hours, but just before I turned up he had started to speak again. I don't know what was going really, but his forehead felt cold and clammy for the next hour and then his temperature felt normal later on. Mother didn't want to call anyone out which I can understand. Mother had got her new Dimplex radiator on today for the first time, which I got for her a few weeks ago – she seemed very pleased with how it works. I have to get another smaller one for another room upstairs. Mother normally has the Parkray fire going all winter, but she can't face all the work involved with this and emptying the ash pan etc, so she is relying on plug in radiators to keep the house warm. They really need to move, but after being there for around 47 years, its a difficult decision – I can't see them moving out of there at all.

I drove home feeling very sad about their situation. My father has nothing left. How long can you go on for mentally, just sitting in the same chair, day in, day out. He can't walk, can't see, can barely stand to use the stern with Mother and is eating less and less. No life at all. Old age is tough and cruel. He cries nearly every time I see him and it breaks my heart. But from a clinical and positive point of view, he has lived a long and generally healthy life – up until he broke his first hip on 10th February 2010, I can't recall him ever going to the doctors, never mind hospital! Apart from a cataract operation. It must have been that healthy lifestyle as Warden at Holme for 33 years! His first stroke on 13th April 2012 was when everything changed, losing his cognition and whole way of thinking. His camera still sits with the film in from that week – it would be nice to see what pictures he had taken, but when I suggest getting the film developed, he gets cross and says no – the film is probably no good anyway now. This year has been tough for him with his second broken hip at the beginning of the year, other hospital admissions and his second stroke recently – all spiralling out of control. Spiralling out of control – that's how I feel at times.

On a lighter note.......!!!!! Spent the evening watching the X-Factor final. I'm glad Louisa won – she was the obvious star from the start – an incredible voice for a 17 year old! Roll on the Christmas break with four days off!
Posted by Penny Clarke at 23:57