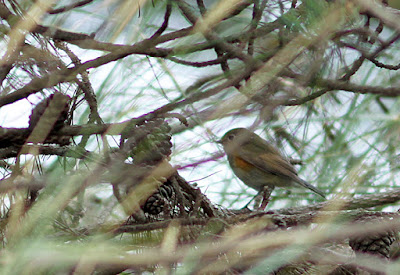 RED-FLANKED BLUETAIL
First one I've seen at East Hills!
Much to my delight, I re-found this at 4.20pm

At last I was able to go birding properly today. The sea-watching had tailed off completely, with very little on the pager first thing this morning, so I wouldn't be seeing any Leach's Petrels today! I felt like walking Blakeney Point, but did I really?! I was also thinking about East Hills, but dismissed this crazy idea – it wasn't worth the treacherous walk out there for an Arctic Warbler! The north west winds would have churned up the quick sands into custard!

As I was driving east along the A148, I phoned Eddie (hands free) who was at Gramborough Hill and said he could see 40+ birders at the Red-breasted Flycatcher at Salthouse – I really wanted to see that, but wasn't going to stand there with that many people. Then, the pager bleeped up with RED-FLANKED BLUETAIL at East Hills. That was enough to persuade me! I also managed to persuade Eddie to join me too! Yes I've seen plenty of bluetails before, but you never get bored of seeing another!

We met up at the concrete pad at Warham Greens at about 12.20pm. Eddie and another birder (Shaun) walked ahead of me whilst I got my gear together and wellies on. I met them halfway along Garden Drove – Shaun had seen a Yellow-browed Warbler briefly. There were two birders walking out ahead of us. 11 people went out earlier on a boat from Wells Quay. It was a very wet walk due to the very high tide this morning. The two birders who were ahead of us were wearing walking boots and stopped at the deep creek, when they realised they were not going to get across in their boots without getting wet, so they diverted east – don't know where they ended up, but they didn't get out to East Hills. You have to wear wellingtons out here if you want to keep your feet dry! We crossed the deep creek in our wellies with no problems. The main creek however, was a different story! Wherever you choose to cross was dodgy, custard sands, we didn't sink higher than just below knees, but still scary though and I was cursing all the way across to the marsh. Your heart is beating nine to the dozen and every time I walk out here, I wonder why the hell I do!

Walking out over the marsh, the sands were pretty wet, but we didn't encounter any more custard sands! Reached the dune ridge and headed towards the sycamores, it was really hot today and it was fabulous to see the sun again.

I was lucky enough to see the Arctic Warbler briefly – two short views, high in the main sycamore glade, but sadly unable to get any pictures. A Yellow-browed Warbler was also seen shortly after this and a further two Yellow-browed Warblers later on. Saw a Spotted Flycatcher perched high on a dead pine stump and also a Pied Flycatcher. Chiffchaffs also seen in the main sycamore glade and there was a Redstart in the pines. Dave Holman was out here, also Ian Brittain, Matthew Shore, Brian Egan and others. 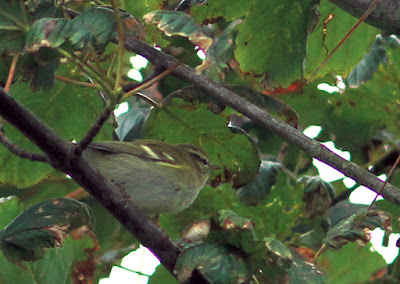 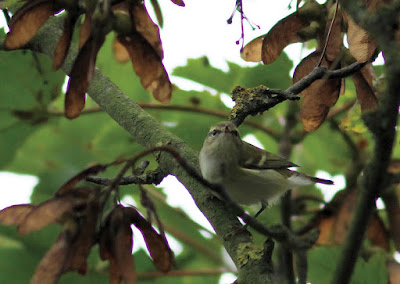 At the west end of East Hills, we saw our second and third Yellow-browed Warbler, 2 Garden Warblers, a Willow Warbler, Chiffchaffs, female Blackcaps x 2, Wren and also watched a juv. Cuckoo flying around with a very large caterpillar! The Cuckoo also landed in a pine briefly. We were told there were in fact TWO Red-flanked Bluetails out here, one at the west end and one east. I felt incredibly frustrated that I had not seen one yet, but they were very elusive and other birders had only had the briefest of views. There was me expecting to see one at close range and with a stonking picture on my camera, at this rate I was going to see one, never mind photograph one!

Eddie headed east back to the main sycamore glade, as he had not seen the Arctic Warbler earlier. I decided to head back west in a second attempt to look for the bluetail. I walked to the furthest point west and saw another Yellow-browed Warbler in the sycamore and a couple of Chiffchaffs. A Sparrowhawk landed on a pine briefly and a Kestrel also did the same. I then walked around the scrub and onto the beach. Up ahead I had wonderful views of 2 Redstarts perched on the large fallen dead pine (from the 2013 storm surge), but was unable to get any decent pictures. As I was watching these, I noticed something fly onto a low pine branch – it was obscured by branches, but my heart was racing when I realised that I re-found the elusive Red-flanked Bluetail!!! It was 4.20pm. I could see the eye ring, the orange flanks and the blue tail, but it was poor light – I took three pictures in succession, then phoned Eddie. I kept my eye on the bird as I was giving directions to Eddie, it seemed to flick through the pines east and then vanished! I couldn't believe that it had disappeared and I never saw it again, despite much searching with Eddie. I felt really bad that Eddie had not seen it, but I was over the moon that I had managed to see it, even though it was only for a few seconds. There were a few Goldcrests and Chaffinches in the sycamores and the two Redstarts I had watched a short while ago, had re-located to the sycamores.

We headed back east through the main sycamore glade, but didn't see anything other than a Chiffcaff and heard a Yellow-browed Warbler calling. No further sign of the Arctic Warbler. It all seemed a lot quieter now. Eddie headed off round the back of the dunes and we met up at the large pine tree by the pool. Eddie had seen a couple of Whitethroats and a Song Thrush – I should have joined him as I saw nothing new.

We headed back over the sands and over the horrible creek, which gave me the same stress as earlier! A large flock of Golden Plovers graced the skies in beautiful light and also saw a pair of Reed Buntings. It seemed to take forever to get back, but we eventually made it back to Garden Drove. Didn't see any birds of note on route back to our cars, oh apart from 4 Carrion Crows overhead east. Eddie saw a Painted Lady Butterfly on the field side of the hedge.

Got back to the concrete pad at 6.40pm. A Kestrel was perched on the apex of the old barn east of the concrete pad and was promptly kicked off by a Common Buzzard who stole its perch! Took me ages to get my wellingtons off and had to ask Eddie to assist. I should never have bought wellingtons a size too small – I had done this on purpose at the time, so that they didn't come off when crossing the dodgy sands – its worked so far! We sat and wrote our bird list up ,whilst munching on caramel, chocolate digestives and coffee. Eddie headed east and I headed west – an excellent day! My photography skills were not exactly what I had hoped for, but at least I got some records shots. 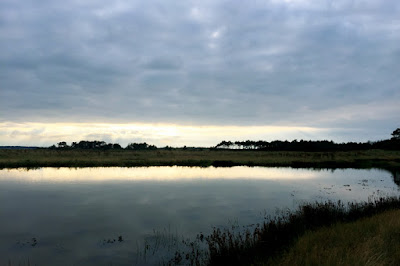 Here are some far more acceptable pictures of a Red-flanked Bluetail, which I photographed at Waxham on 14th October 2010!
http://pennyshotbirdingandlife.blogspot.co.uk/2010/10/red-flanked-bluetail-no2.html
Posted by Penny Clarke at 23:57