Arrived at Bunkers Hill which is east of the Anmer cross roads at just after 9.30am. Andy W. and Justin L. were there along with a few other birders, but no one had seen the White-tailed Eagle yet. In fact it took most of the day before it put in an appearance! It was seriously cold, but I had so many layers of clothes on it wasn't too bad standing there really. Three Common Buzzards were seen along with a Red Kite, Kestrel and lots of woodpigeons and gulls. Sat in the car and had some soup. Andy and Justin left to go and watch Norwich play, so they sadly didn't see the eagle. I went for a drive and went all along the back roads around Houghton and saw good numbers of Fieldfares and Redwings and also a few Mistle Thrushes. I ended up at Abbey Farm Hide at Flitcham where I had a nice selection of birds including the Little Owl sitting in the right hand side of the oak tree, Common Buzzard, 2 egyptian geese and a massive amount of Fieldfares, so many it was a job to count them, I reckon there were at least a 100 on the fields around the central oak tree. 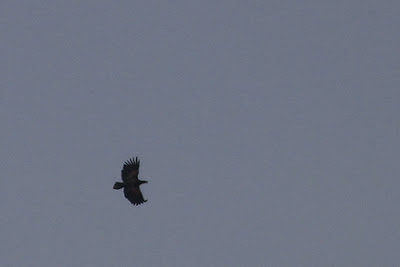 Back at Bunkers Hill there was still no sign of the White-tailed Eagle and nothing had come up on the pager all day. I decided to have a nap in the car, I felt so tired. Closed my eyes but kept the window open slightly to keep an ear out for eagle news from other birders! In the midst of my snooze I had to jump out of the car quickly, as I could hear hear a scurry of excitement as news came on the pager that the WHITE-TAILED EAGLE had been seen 'WSW of Bircham, 1/2 mile west of Shernborne in field 'til 2.55 then flew SE towards Anmer'. Several of us decided that it was best to stay put as it seemed the eagle should be heading our way. We waited and waited and suddenly someone shouted 'there it is'. There it was indeed at 3.24pm – its obvious silhouette in the distant, slowly but with strong flight steadily heading our way. For a moment it appeared to be heading straight for us, but then changed direction and flew across the field in front of us and then over the copse and out of view. Lots of cheers went up, especially from the birders who had been here from first light! Magical to watch, but the light was dire sadly and a bit too distant to photograph, but did manage to get a few record shots. So glad I got to see it in the end. I left immediately and drove round trying to relocate it as others did, but no more sightings from me. Apparently it was seen by others flying across a field towards 'The Lake' which I believe is behind Houghton Hall and not accessible. I also heard from another birder that the eagle had been sitting in the field near Bircham for a couple of hours without anyone bothering to put news out!!! I saw a very accommodating Barn Owl when I was driving round and also bumped into Dave A. and David N. along a very narrow road!
Light was rubbish now and it was snowing again, drove to Ringstead to buy a bag of sticks from the farm house for mother and then went to visit my parents before returning home.
Posted by Penny Clarke at 22:33