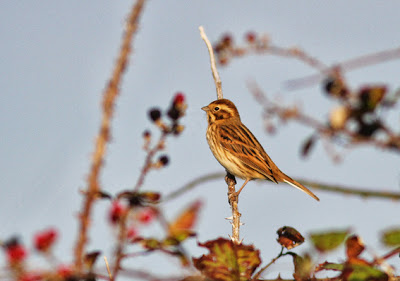 
Well today's post won't take up too much of your time!

Started off at Old Hunstanton to look for the Bonelli's Warbler, no sign whatsoever, but did see a Chiffchaff in a sycamore, a few blackbirds and robins. Got some funny looks from locals – understandable I suppose, since I was standing in someone's driveway looking into their garden (owners not there).

Visited parents for a short while.

Went to Titchwell RSPB to look for yellow-browed warblers, no luck whatsoever. The highlight here was bumping into Norman Sills – he always looks the same and never seems to age! 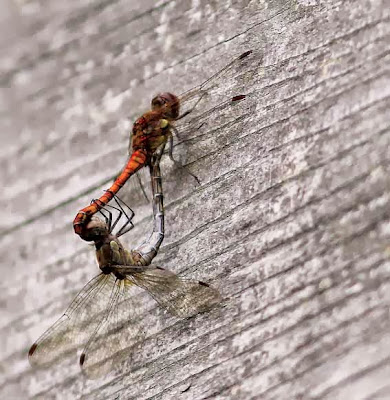 Photographed these Common Darters (?) mating on the Fen Hide at Titchwell.

Went to Garden Drove, Warham to have another look at the Red-breasted Flycatcher. It was not showing at all when I was here! Its a good job I saw and photographed it last week, as it certainly wasn't playing ball today! Goldcrest in the tree by the concrete pad, nothing else of note.

I had decided on Blakeney Point today over East Hills – I regretted that later when news came from East Hills of a yellow-browed warbler, 4 firecrests and 5 lapland buntings!

Parked up at Coastguards and started walking Blakeney Point at 3.15pm. On route I had a single Redwing, good numbers of Meadow Pipits. At 'The Hood' I had 3 Reed Buntings, a 'Sylvia' warbler that I couldn't nail, 1 Hedge Sparrow and 1 Reed Bunting. In the big bush at Yankee Ridge I had 4 Reed Buntings and 2 Hedge Sparrows and also 4 Wheatears on the short turf. In 'The Plantation' I saw 1 Goldcrest and 1 Willow Warbler. 12 Meadow Pipits and 16 Linnets flew over. A few more linnets dropped in briefly and that was it. Paul Nichols, one of the Wardens at BP came across to chat and discuss the hand gliders that had flown over BP this afternoon, disturbing every bird in sight! Paul very kindly gave me a copy of the first Holme Bird Observatory Annual Report for 1962 Price 3/6!!!! Thank you very much indeed Paul. 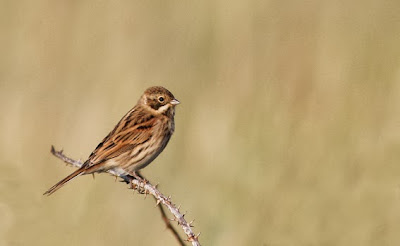 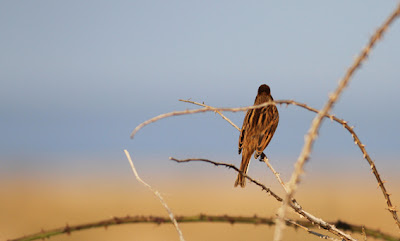 Reed Bunting looking out to sea at 'The Hood', Blakeney Point.


Walked back in the setting sun. Ok, so there were no mega birds today, but the walk back from Blakeney Point was just beautiful, the skies were streaked with pinks and reds and the sea was almost like a mill pond. There were several inquisitive seals on route back aswell! Got back to the carpark at 8pm and home at 9pm.

MORE PICTURES TO BE ADDED
Posted by Penny Clarke at 23:47