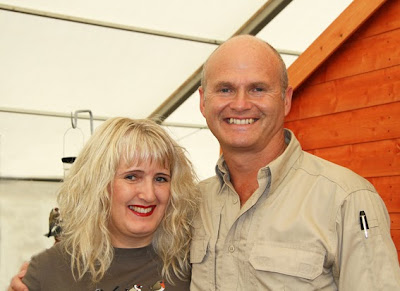 Penny Clarke & Simon King!
Made for each other! (Dream on Penny....)

Today didn't exactly go to plan! I was so exhausted I just couldn't get up early enough. Can't remember what time I left in the end, but when I got as far as Peterborough I had a horrible feeling that I had didn't have my purse. Pulled off the road and rummaged in my bag – nothing, ok stay cool and look again – still nothing, BOTHER!!!! Well that's not actually what I said! I just could not believe that I had to go all the way back home, when I was already running massively late. I cursed and muttered all the way back to King's Lynn. I then remembered why I didn't have my purse – I had packed it in my bag, but had taken it out to have my visa card at the ready, to buy an extra on-line ticket for Sunday and had then left the purse by the laptop and that's exactly where it was when I got back home!

I eventually arrived at Bird Fair after lunch! It was so exciting to be here again amongst thousands of other birders united, together for three days. Bird Fair is like one massive family and one big bird party – its just absolutely brilliant and I love it! You meet so many lovely people here and alot of them you only see once at year at Bird Fair, so its great to see them again. It had been raining in the morning and it was quite water logged between the marquees and was very, very hot! First stop was the Optics Marquee and to the Swarovski stand where I was given a stunning silver and crystal parrot brooch and managed to get another one later (present for someone). I had a look through the Swarovski ATS 80 HD +25-50x Scope and immediately fell in love..... one day! Walked through to the Simon King Marquee – yes he has his own whole marquee this year!!! It was my lucky day, as I walked into the marquee there was Simon!!! First celeb picture of the afternoon and signed photo card with "For Penny, Have Wild Adventures, Simon King x" and it was so lovely that he remembered my name, so exciting! 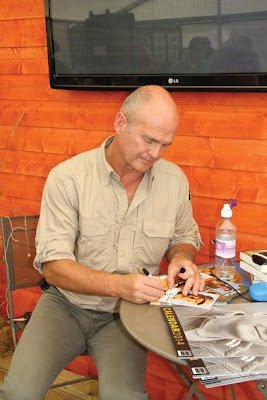 Shortly after this I bumped into Writer, Broadcaster and Celebrity Derek Moore who I had a lovely chat with and he told me that I needed to buy his book "BIRDS – Coping with an Obsession" which is an account of Derek's journey through 70 years of birdwatching – ok I probably did and later on I did exactly that! As an ex-typesetter, paste-up-artist etc I harshly judge the quality and design of new books – this had a luxury feel about it, a heavy book with quality, heavy weight gloss paper throughout, a simple, but bold and classy front and back cover and lavishly filled with colour photographs throughout. I am really looking forward to reading this. Derek was signing his book on Wildsounds and he warned me with a smile, that he was going to write something cheeky in my book and he did: "To Penny, Gorgeous Woman Birder! Derek Moore, Bird Fair 2013" – made me smile! I also asked Bill Oddie to kindly sign where he had written the Foreword for this book later on. Mark Avery's review of this book is here: http://networkedblogs.com/NZScL.

I also bought a waterproof double bean bag for my camera from the Outdoor Photography Gear stand which cost £20.00 unfilled – (filled it with bird seed when I got home!). Managed to get a few free lens cloths and also free magazines: 'Amateur Photographer', 'What Digital Camera' 'BBC Countryfile',  and 'BBC Wildlife'. Also visited one of my favourite stands: Women for Conservation and bought a beautiful ring.

Went to the Rare Bird Alert stand to say hello to everyone. Opposite the RBA stand is the Guyana exhibitors and it was great to see Carl Browne again, who I met last year at Bird Fair. Carl attempted to get me on the rum again, but I kindly pointed out that I would be driving home soon! The people on this stand are really lovely and Carl especially has a very amusing sense of humour! Also had a nice catch up with Tim and Irene Loseby on the Fair Isle stand. I was upset that I had missed Gunnar Engblom singing about the bird party at lunchtime, but hopefully I would hear him sing tomorrow.

In the main Events Marquee I watched Simon King present the "British Bird Photography Awards" to three photographers. I had a lovely surprise when Chris Knight's was called up for third prize with his picture of a swift flying over a roof! Link to the winner's photograph HERE. 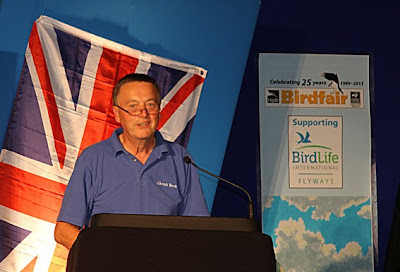 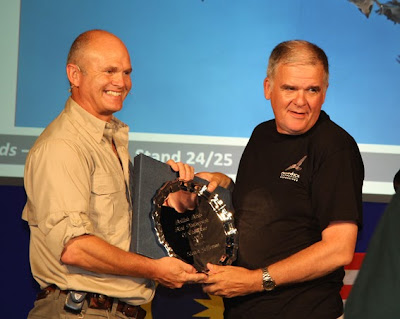 Steven Jefferson receives the First Prize of a Silver Salver and a cheque for £1000 from Simon King.

Second Prize was won by Michele Mendi,
but not present at the award ceremony. 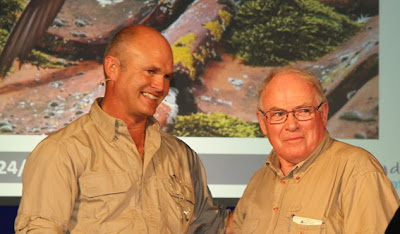 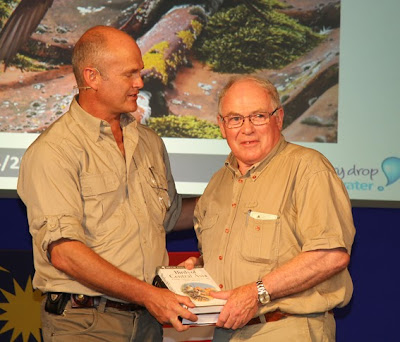 Chris Knight's receives the Third Prize (books of his choice)
from Simon King. 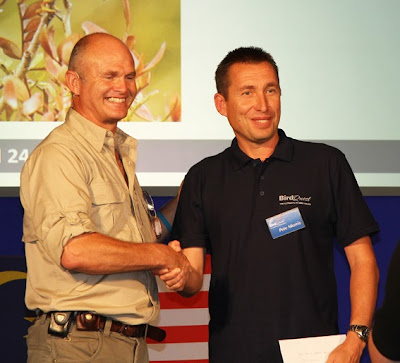 Pete Morris receives the Digiscoping Winner Prize
of a cheque for £200 from Simon King. 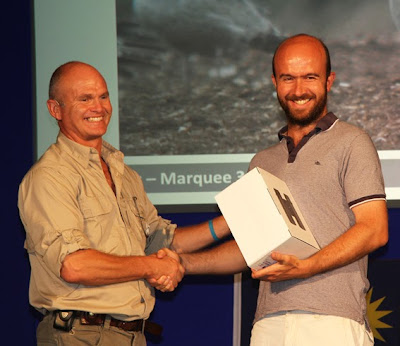 Tom Lowe receives his Prize of Zeiss Bins. for the Carl Zeiss Award from Simon King.

Full details of these awards can be found HERE and HERE.

I bought the Bird Fair 25th Anniversary Tea-shirt and later on when I got home, I re-designed it. I heard several ladies asking if that was the only design that they sold – not many people like those typically high, round necked tea-shirts and neither do I. I cut and hand sewed a more flattering neckline into the tea-shirt and also sewed 'Penny' in Silver sequins on the back of the tea-shirt just to jazz it up and add a bit of bling!
Posted by Penny Clarke at 11:18