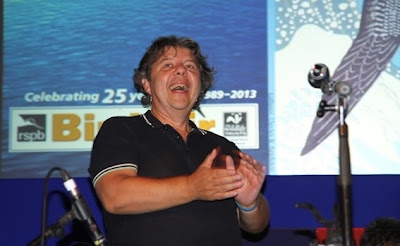 
The
Birdfair Effect
Ceri Levy hosts a fantastic multimedia showcase celebrating 25 years of Birdfair – from a one-off event to a global sensation!

This event was scheduled to start at 6.30pm and finish at 8.30pm. They had a few technical issues and didn't start until 6.45pm and ended at 10pm!!! What a fabulous evening of entertainment and everyone was offered a free drink as they entered the party!

I managed to sit fairly near the front, but quickly became frustrated as I wanted to video some of the guests, so I boldly got up and went and sat on the floor with the children at the front and this resulted in me being able to get some fabulous video footage! 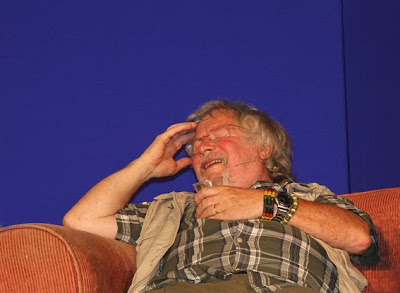 Bill Oddie relaxes on the couch with a drink – I love this picture! 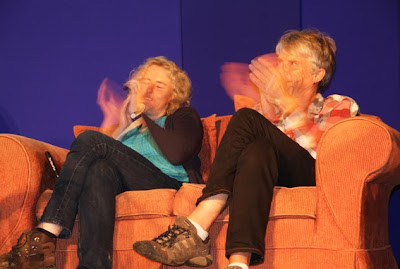 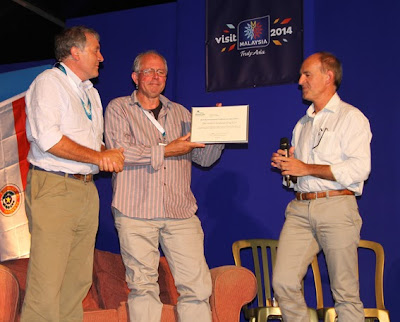 "Bird Life" present a certificate to Tim Appleton and Martin Davies for their 25 Year Achievement. 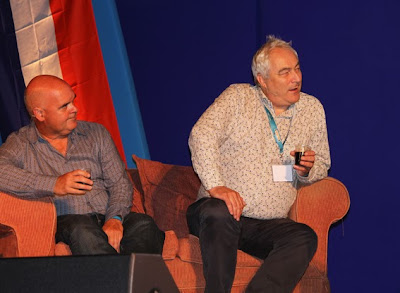 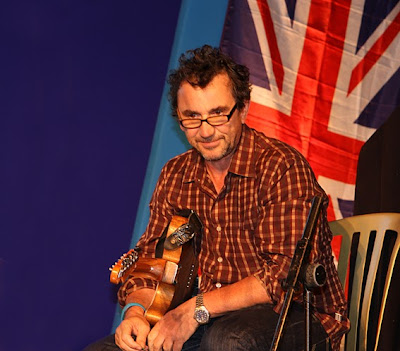 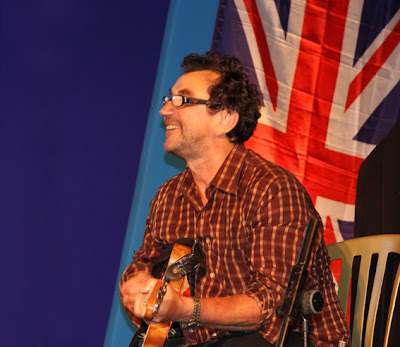 
The evening was presented in TV chat show style, with each guest being offered a drink as they sat on the couch! First up was Tim Appleton and Martin Davies who were asked by Ceri about the early days of bird fair and how it has grown etc. Stephen Moss and Bill Oddie were up next and as usual Bill was hugely entertaining and well, just fabulous, I love him. Bill talked about the things that had changed in birding over the last 25 years and mentioned that fact that there were many more women birders now, which we were 'better off for' which resulted in loud applause from the audience! Recorded this on video, which I will add to this post. A wonderful film was shown of Bill Oddie, Stephen Moss, Tim Appleton, Dick Filby etc doing a bird race (alot of years ago) which was highly amusing to watch! All of the guests were interesting and fascinating to listen to. I was however completely taken by back and in awe of artist Marcus Coates who presented people singing birds – yep you heard me correctly! Marcus recorded videos of people singing along to slowed-down birdsong (20 times slower) in ordinary human habitats, then sped the videos back up to pitch. Watching these people speeded up 20 times was highly amusing and the audience was roaring with laughter, but equally captivated by these unique recordings. Marcus demonstrated this live and sat with Mac computer and headphones (to concentrate) and proceeded to sing both Skylark and Wren at a slowed down speed, which sounded so odd, slow, repetitive, but amusing at times. He then selected a facility to speed it up by 20x times and and played it back for the audience to hear a Skylark singing!!! It was just unbelievably brilliant and well I just can't put into words how much of a genious that man is! See his work with singers here on youtube. Also see HERE.

Jackie Oats who is a folk singer and violinist, serenaded us several times throughout the evening and her voice was just so beautiful and relaxing to listen to. The evening ended with actor Phil Daniels who I immediately recognised from playing Kevin Wicks in Eastenders reading poetry and also singing with electric guitar about the seagulls of Brixton, which was hugely entertaining and I managed to capture this on video too. I couldn't believe the time, as we all walked out of the marquee - it was 10pm! Got home around 11.30pm.


MY VIDEOS OF THE PARTY – ENJOY!


Host Cery Levy chats with Bill Oddie, Stephen Moss, Martin Davies and Tim Appleton at the Rutland Bird Fair Party. The guests had just finished watching an old film of them doing a bird race at Rutland many years ago and were discussing this when I started to film them.


Artist Marcus Coates sings Wren, slowed down by 20 times!
The following video shows what happens when he speeds this up by 20 times!


Artist Marcus Coates sings Wren, speeded up by 20 times - awesome! He then goes on to sing and record Skylark slowed down and then speeded up and played back to the audience! He goes onto show some videos of people singing different birds which can be seen HERE

A Fabulous Bird Party Celebration!!!
Posted by Penny Clarke at 23:58