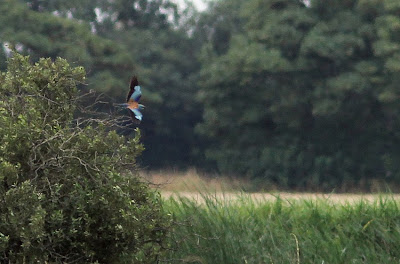 What a fabulous day's birding and so chilled, no rushing and got lucky with another good bird in the bag at the end of the day!

As usual, too tired to get up pre dawn, bashed the alarm clock down and went back to sleep. I eventually 'rolled' (excuse pun, catching from JF) up at Horsey at around 11am. The weather was a mixture of sun and cloud today and was a nice temperature to be out in, without being too hot. I luckily found a parking place, opposite the Nelson's Head Pub and walked along the tarmac road and then onto the track that goes out to the dunes at Horsey. I bumped into several blog readers today (nice to meet you all). I didn't rush, I had all day and was determined not to get flustered if the Roller had disappeared, which of course it had when I spoke to other birders – bl**dy typical! It had flown from where people had been watching it (south of the track) over the track and to the north side but had not been re-found yet. At 11.28am the pager bleeped up with Roller sitting in dead tree, north of the track. I speeded up and joined birders who had the Roller in their scope and there it was in all its turquoise glory – magnificant and jaw dropping was an understatement. I  had much better views of this bird, than I had of the Holt bird. It flew down to feed regularly and back up on a favoured, small dead tree – the colours were so beautiful when it flew, awesome. I spent a long time here and attempted to take distant pictures – lets just say I have some arty farty, smokey looking shots! Walked up to the dunes and saw a single Artic Skua flying south. Also watched a couple of young kestrels whilst in this area and also a few yellowhammers. Walked back and enjoyed watching the Roller again and left about 2pm, where it still remained in the area, north (left) of the main track down to the dunes. Walked back to the car with Brenda, a lady from West Runton who birds around Cley alot. 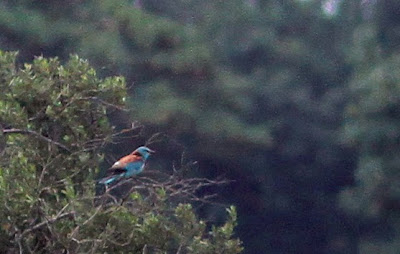 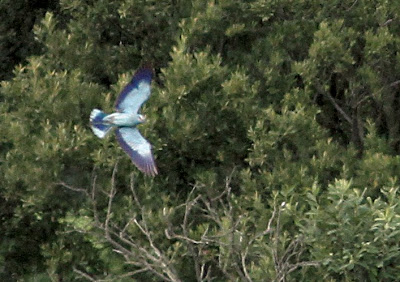 My plan was to spend the rest of the day at my favourite place – Cley. I popped into Holt and succumbed to a very nice khaki green designer top to wear for the Bird Fair! Well, 'one' has to make an effort occasionally! I felt so tired when I returned to my car, that I fell asleep for a while. Got a text message from Eddie about a Red-necked Phalarope being found at Cley NWT!!!

Parked at the bottom of Old Woman's Lane and walked to the NWT hides. In Teal Hide I bumped into Pete Hassatt (Allen) who told me it was him who had found the juv. Red-necked Phalarope at just after 5pm this evening – Congratulations Pete! I looked at the bird through Pete's scope for a short while and then left to go and eat my tea. I couldn't wait any longer as I'm following a diet which doesn't allow much food really and I was starving! Sat and ate my salad tea in the car and then returned to the hides for the rest of the evening. It was great to see so many local birders in the hide including Eddie, MAG, RM, James Mc., Dave H. Pete C., Pete S., Julian B., Keiran, finder Pete A., Duncan Mc. etc etc. Distant, but wonderful scope views of the Red-necked Pharalope. Eddie found two Garganey to add to the excitement! A sparrowhawk flew through and the entire gull population got up and hot-footed it to North Scrape, much to the disappointment of the regular gull watchers! The RNF was flying around with a big flock of dunlin and it took ages before they decided to land. The Red-necked Phalarope was watched until about 8.35pm, when if then flew off to North Scrape.

A colourful sunset finished the day beautifully, as I walked back along the boardwalk with wavering reeds in the gentle evening breeze!

A few more pics to be added
Posted by Penny Clarke at 23:54