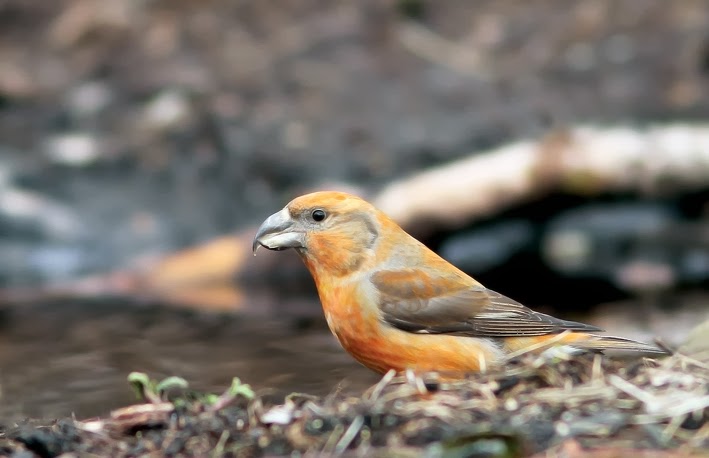 I arrived at Edgefield, Holt to join Julian Bhalerao, Graham Clarke (not a relation!), another photographer and also later on Jim Almond and Gary Thoburn. Mission: to photograph the Parrot Crossbills. It was dull when I first arrived at just before 9am and with cloudy skies, rain threatened to dampen my spirits.

We were standing by a small, favoured drinking pool below a tall, dead pine tree in the midst of a large clearing. It was cold this morning and I wished I had put my mittens on instead of gloves – always warmer with mittens. I had also made the mistake of leaving my flask and food in the car as I hadn't intended in staying as long as I did! Julian got some fabulous photographs yesterday, see HERE if you are on facebook. The skies brightened and there were several sunny intervals with blue skies which was very inspiring. 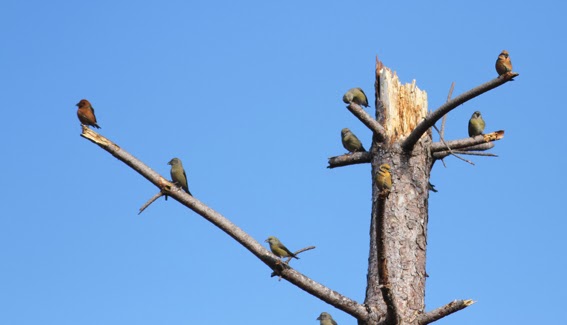 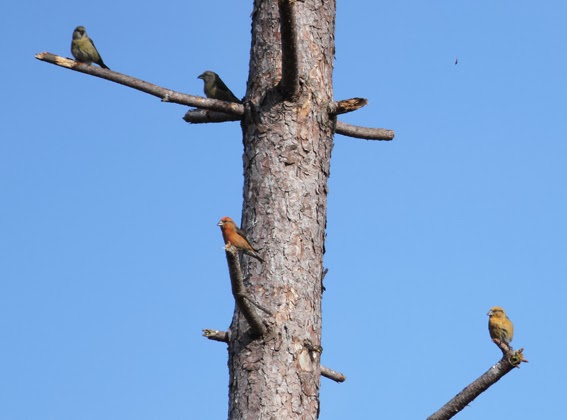 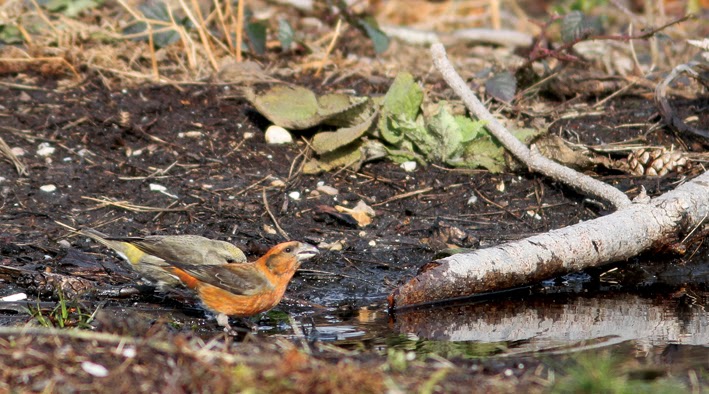 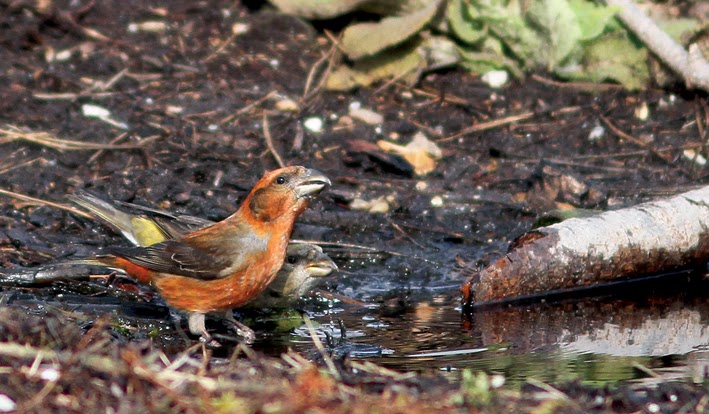 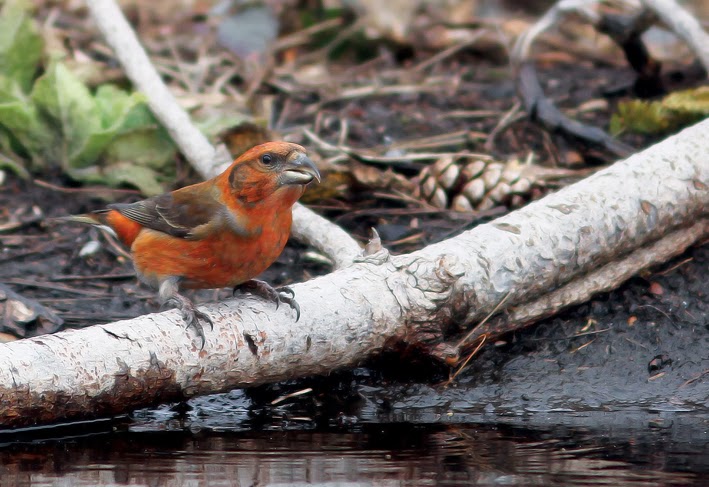 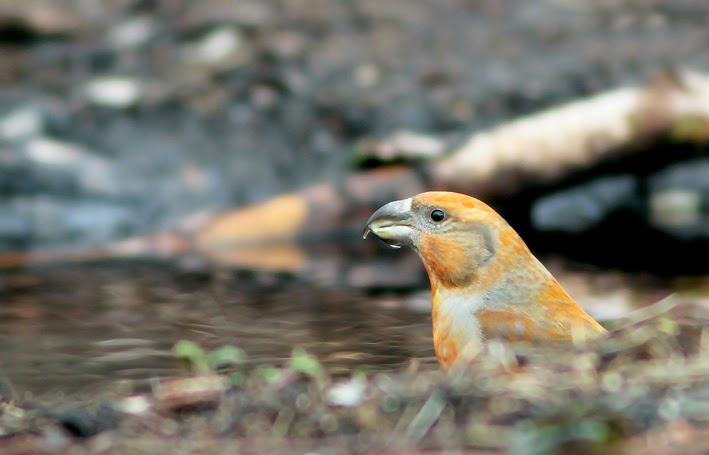 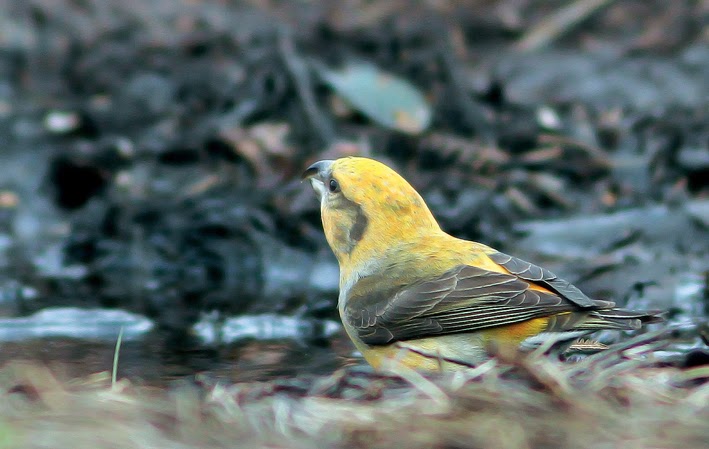 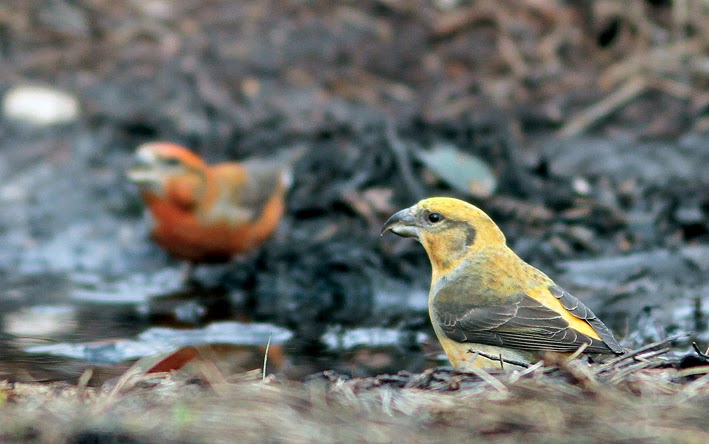 
We watched crossbills flying around the tops of pines, landing, flying over us and also coming down to drink from another small pool (out of view), which as Julian pointed out 'they hadn't read the script, obviously'. Julian and others left a few hours later to watch them by another pool near the main road. I stubbornly decided to stay put along with Jim Almond. I was fed up with standing, so decided to sit on a sawn off tree stump, which was a few metres closer from where I had been standing. I now had a perfect view of the drinking pool with my 300mm lens! I waited and waited and kept as still as possible with camera balanced to the ready. Common Crossbills came down to drink – magic! Got some pleasing shots. Gary Thoburn also then joined us, which he had timed perfectly. I had just lifted my bottom off my newly acquired seat to have a stretch, when Gary and Jim said 'here they come'. I swiftly sat down again. Parrot Crossbills and Common Crossbills flew over our heads and landed on the tall tree stump right next to us! They sat there for a good while, perched on branches, eating cones, preening and chattering amongst themselves. I remained motionless. One wrong move at this distance and I would have blown it. I scarcely dared look up from underneath my hood, but I did peep a couple of times – carefully! Eventually one by one, they came down to the pool to drink, directly in front of me – so exciting and absolutely magical to watch and photograph. There was a particularly interesting Parrot Crossbill which was a wonderful lemon yellow/orange colour, which stood out from the crowd so to speak. I managed to get very sharp images of this bird's rear end! But sadly failed to get a sharp shot of the head. However I did get some good shots of a orangy male bird. Four and a half hours later at 1.30pm, my mission was accomplished! I was so pleased my patience had paid off. I could have stayed longer I suppose and maybe I should have done, but I was frozen, hungry and had a headache through lack of drink. Jim had left just before me and I left Gary to enjoy any more sightings for the afternoon – see his pictures on twitter here. Plodded back to my car and felt quite ill. Had some coffee and decided to save my food for later on. I needed to warm up and have some hot food.

Cley NWT Visitor Centre provided my much needed lunch. There were no baked potatoes left when I arrived at just after 2pm, so I had soup with wholemeal bread AND a cheese scone (yes that is the second one this weekend!) along with a pot of tea. Managed to get a window seat and I started to feel a whole lot better! The weather was dull with grey skies and the wind had picked up. The rest of the afternoon did not look exciting. After my lunch I returned to my car and decided I needed a nap. Put the seat down and snoozed until 4pm!!! It was raining now and I felt chilly. Had a coffee and then decided I needed to head for home as I didn't feel exactly brilliant.

Cruised along the coast road as I wanted to visit my parents at Holme before going home. Stopped at Blakeney Quay to see how things looked now since I had photographed the aftermath of the Storm Surge in December. Obviously the road was now clear, rubbish all gone, and water levels have returned to normal. However the huge breaches and damage to the sea wall still remain.

Stopped off at Stiffkey Campsite carpark to watch for birds/raptors coming in to roost. I had a cracking Male Hen Harrier flying east at 4.45pm which also turned back again west a bit later on. I counted 20+ Little Egrets flying east and one Marsh Harrier was seen. No Barn Owls though which is unusual, as this is generally a very good place to see one.

No barn owls on route to Holme either – I usually see one along the A149 somewhere. Visited my parents for a while and then went home to King's Lynn.
Posted by Penny Clarke at 23:52