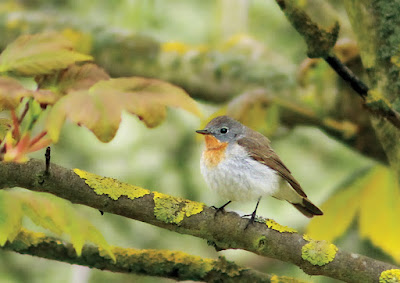 
I jumped out of bed like a bullet out of a gun, when I realised I had slept through the alarms and I still managed to get to Holme by 8am (ish). This bitterly cold weather is getting rather tedious now, its ok if you are walking around, but standing in these conditions is not funny at all. The BBC weather for Norfolk tomorrow, reads the following: "Feeling cooler and breezier towards the coast." HOW CAN IT POSSIBLY BE ANY BL**DY COLDER THAN TODAY!!!

I seemed to have spent the entire day watching and photographing the cracking Red-breasted Flycatcher at Holme NWT! Well, almost! I have met several people today, who introduced themselves as readers of my blog – lovely to meet you all. One elderly gentleman stated that he was 87 years old – I'm glad I help to entertain your day! Nice to meet a young birder called Henry and his (presumably) girlfriend, who I was chatting with at the end of the day – they got very lucky and managed to see and photograph the RBFly in poor light. Thank you especially to those who kindly spoke of their sadness at my father's recent death – all your words of kindness are much appreciated.

I parked up on the NOA car park and walked across the path to dunes, then turned right to stand to watch the large sycamore tree on the edge of the NWT car park. This is now the only mature and largest sycamore between both reserves, so this will be a huge magnet for rarities in future months to come. There is also a very small sycamore close by the large one and this is where I obtained all my pictures of the Red-breasted Flycatcher today. For those of you wondering why sycamores are a magnet for birds – the leaves are sticky on the underside and attractive to aphids and therefore a variety of predators, such as hoverflies and birds. The leaves are eaten by caterpillars and are obviously another food source for birds. The flowers produce pollen and nectar to bees and other insects, and the seeds are are also eaten by birds. So basically, a sycamore is food heaven to certain birds and especially a newly arrived migrant, such as a Red-breasted Flycatcher! Several species of warbler love to forage in sycamores, notably Pallas's Warblers, Wood Warblers, Yellow-browed Warblers, Chiffchaffs, Willow Warblers, Garden Warblers, Spotted Flycatchers and so on! 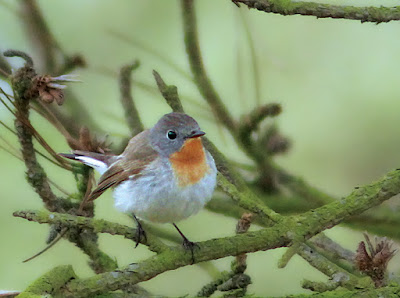 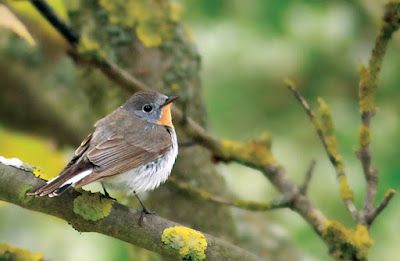 
I stayed in the same spot, sitting and standing until about 2.30pm! I have a lot of patience for photography (about the only thing I do have patience for!) and had to wait for sometimes an hour, before the Red-breasted Flycatcher landed in the small sycamore in front of me and even then it was sometimes obscured by branches and leaves. I managed to get a few pleasing shots, but nothing that I was over excited about. A Turtle Dove was purring in the middle of the sea buckthorn close by. I was frozen to the bone by the afternoon and headed back to my car for a very late lunch and flask of coffee. I added more clothing layers and put my waterproof over trousers on to keep warm. Saw three Swifts hurtle overhead and a flock of Golden Plover flew south over the marshes. I had lovely views of the stunning male Redstart, along with at least 4 Wheatears in the horse paddock, viewed a short way along the path to the NWT hides.

I walked around to the Bird Observatory and heard Sedge Warblers singing and a few Swallows gracing the skies, but not much else. Walked to the pines behind the observatory and found a smart male Blackcap, a Hedgesparrow and a couple of Robins in the pines by the beach. I returned to the small sycamore tree and stayed there until just after 7pm.

As I drove back along the Firs Road, I managed to see a Whinchat perched on a fence wire, that several other birders saw earlier in the day – so this was an added bonus. I feel a bit guilty today, as I didn't even go round to say hello to Sophie before she left the obs. and neither did I pop into to see my mother! I felt so tired and cold when I left – it was so nice to put the heating on to the max in my car! I had a quick detour around fields between Ringstead and Thornham, in case yesterday's Hoopoe happened to be around still  – no luck there and then headed home to King's Lynn.

The last day of my holiday often brings a good bird, so lets hope that trend continues! I can't be out too early tomorrow as I have to go running first, to complete my second week of Couch To 5k. (I should have gone today). The third week starts Monday morning, so can't get out of it! Sorry, but far too exhausted to go through pictures tonight.

A condolence book for my father is now at Holme Bird Observatory for anyone that would like to sign it, add a few words or an amusing story and will remain there over the summer months for those that were not able to attend the funeral/wake. I have left a picture frame with a few words of thanks etc and a picture next to the book.

A FEW MORE PICTURES TO BE ADDED ON MONDAY
Posted by Penny Clarke at 23:45