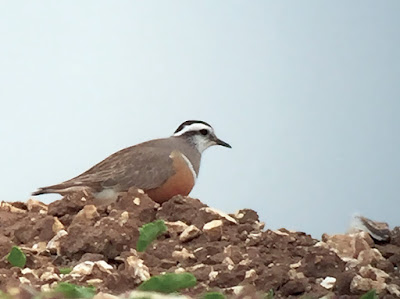 I felt exhausted from working yesterday, so had a pretty lazy day's birding – I didn't get the feeling that something big was going to turn up in a very blustery south west wind anyway, unless of course you live in County Donegal!

I went to Moulam & Horn in Heacham to buy mother's sack of bird seed, which she normally has delivered but forgot to order it. I have not been to this shop before and was very impressed with the selection of wild bird food on offer. I was told that they can get any seed in for you, such as Red Millet seed, which Turtle Doves particularly love. I came away with mother's usual order and a sack of finch seed (cheaper) too.

I delivered the bird seed, along with a loaf of bread to mother. We sat chatting for a while and I attempted to persuade her to come birding with me, but she didn't sleep very well last night and didn't feel up to it, so I left her to rest.

Titchwell RSPB
I ambled around the Fen and Meadow Trail to search for something exciting. The best birds I found were a male Bullfinch behind some bushes near the Fen Hide and two Spotted Flycatchers in the alders (where they were on Saturday) by the Dragonfly Pond. I met and chatted to a lovely couple who, when talking about Holme said how much they missed seeing birds on the telegraph wires along the Firs Road – 'don't even get me started on that' I replied! Seeing Kestrels, Swallows, Martins, Cuckoos and many other birds perching on the wires, including a Bee-eater once, were all part of the scene at Holme – if I had my way, the telegraph poles and wires would be still be there! A Cetti's Warbler was bombing about from the willow tree to the reeds in the pond and A Little Grebe was also here. Sedge Warblers were singing everywhere and a Cuckoo was heard.

Other birds seen: Long-tailed Tits, Robins, Great Tits, Blackbirds, Greenfinches, Chaffinches, Whitethroats, Chiffchaffs, Blackcaps, Marsh Harriers. At the small pool east of Patsy's Pool, there were a huge number of hirundines skimming over the water – the most I've seen in one area this year so far. It was spitting with rain the entire time I was at Titchwell – a gloomy day with strong south west winds. Had lunch in the cafe and met a couple of blog readers, nice to meet you both.

Gypsy Lane
It was a nice walk along this hedge lined track, but very few birds seen. Saw another Bullfinch, Chiffchaffs, Blackcaps, Blue Tits and three Muntjac deer in the copse on the west side of the path.

Choseley Drying Barns
I checked the fields out along Chalkpit Lane for Dotterel, but didn't find any. Parked up in the usual spot at Choseley Drying Barns and with scope (always needed for Dotterel!) headed west along the hedge lined public footpath to view the Dotterel. I met a birder on route, who kindly gave me a rough idea where to look. The good thing about week days is that there are less crowds – there was no one else here! I found the Dotterel far quicker than I expected too and had wonderful views of them through my scope. They were much too far away for SLR photography unless, like Steve G. you have a wacking great lens! I set up the phone scope kit and managed to get a few videos (only one I really liked when I went through them all this evening) and a few pictures – none were sharp, but with very windy conditions, distance and phone-scoping, you are never going to obtain a mint picture! The Dotterel disappeared over a ridge, so it was a good time to depart. Saw a Yellowhammer in the field and there were lots of Swallows skimming overhead and Whitethroats singing in the hedges.
Dotterels x 8 at Choseley Barns, Titchwell
A very windy phone-scoped video! 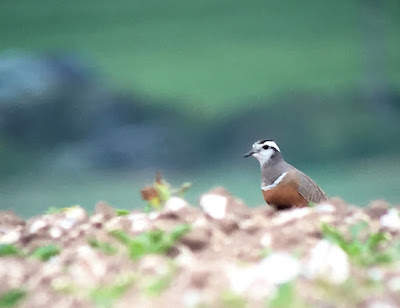 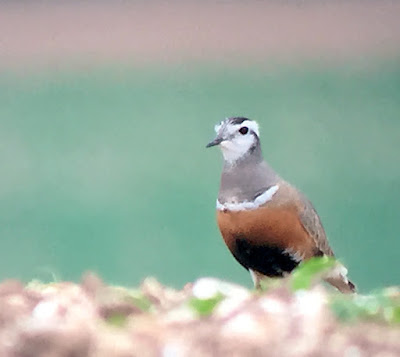 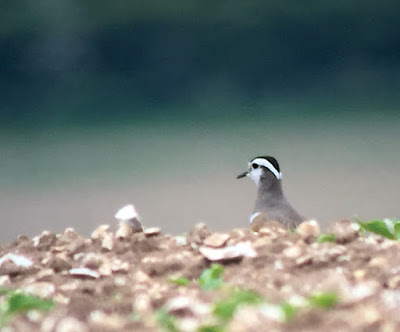 
I bumped into Phil from Holme, who was on his way out to see the Dotterel. A little further along the path, not too far from my car I could see a man by the parking area who started shouting at me 'is that your car?' he bellowed. Not knowing which car he was referring to, I shouted back 'mine is the green one'. As I neared my car, the man got into a tractor that was pulling a massive trailer. From the cab of the tractor he shouted 'this is not a car park you know'. I was not parked in front of any field entrance, so I couldn't really see what the problem was. I was parked centrally in front of the entrance to the public footpath. He carried on ranting and raving, but because of the wind I couldn't hear what he was saying. No doubt he will block this last remaining area (see yesterday's post), so that no birders can park anywhere at all. This farmer really doesn't like us birding folk! He should be pleased that people are here to look at birds – we are not nasty people, quite the opposite. After all, he could have vandals up here, fly tippers, raves going on, dodgy people and all kinds!

Holme Marsh Reserve NWT
Spent a while here, in hope that there might be some wagtails amongst the cattle from the third hide, but none were seen. Not many birds seen here really: a Heron, Marsh Harrier, Robins, Cetti's Warbler, Sedge Warbler, Mallards, Lapwings and that was about it.

Spent the rest of the evening with mother before returning home. I see the winds are turning SE on Thursday and Friday, so we might all be in luck with a good bird or too!
Posted by Penny Clarke at 23:59