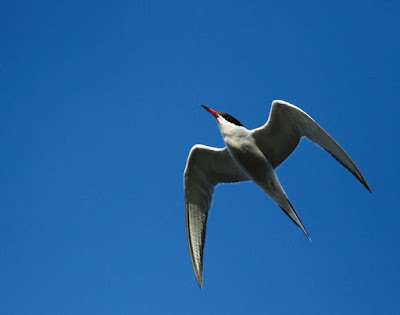 
Highlight of the afternoon at Titchwell RSPB was not the Pectoral Sandpiper – it was the Red Arrows displaying and then flying over the reserve back to Lincolnshire!!! People had to pay to see them at Holkham Fair! The lowlight was me sitting down in long grass next to main path to photograph the Pectoral Sandpiper and landed on a short stump with big rusty bent nail, that was hidden in the grass – right on my tail bone (coccyx) – absolutely agony, can hardly walk and it killed me to drive home – dosed up with paracetamol and ibuprofen – hope I can get out of bed in the morning!!! 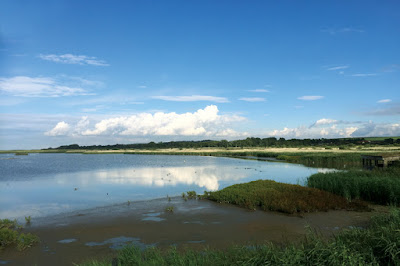 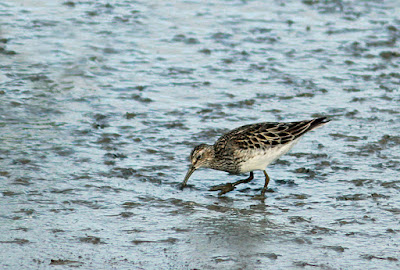 
On the sea I saw 5 Gannets flying west and also an Arctic Skua flew west, which was hassled by a Common Tern on route. A Painted Lady butterfly landed on the sand next to where I was sitting. I spent the rest of the evening with the Pectoral Sandpiper. Whilst standing near Island Hide, I heard someone standing close by saying 'Red Arrows' – looking up in the sky, I couldn't believe my eyes! There were the famous Red Arrows displaying right over the reserve – ok, so slight exaggeration – it was actually a display over Holkham at the Holkham Fair (I discovered later), but it didn't seem that far away. The plumes of Blue and Red smoke trails swirled through fluffy white clouds and blue skies – fabulous views, highlight of the day! The best moment was when they departed and headed towards us, over the seaward side of the reserve and off over The Wash to Lincolnshire – Wow! If only I had been standing by the sea at that moment – I would have potentially have got some cracking photos!
After all this excitement, I decided to sit down by the path at a low angle, to photograph the Pectoral Sandpiper. The grass was wet, so placed my waterproof stuff sack down to sit on. I wasn't half way down the bank (which is too close in my opinion), I simply sat down right next to the chalky path – oh how I wish I had sat further down! As I sat, I landed on a loose rusty nail stuck in a very short, lumpy post, which was hidden from view in the long grass – right on my tail bone! The pain was intense and after feeling to inspect what I had landed on, I shuffled a few inches away from the stump and did not get up immediately, as I didn't think I was going to be able to! When I did get up, it was agony – I plodded slowly back along the main path to the car park. The skies had blackened and it looked like heavy rain was imminent, but I could not walk at a fast pace.
Visited my mother for a short while, who had been trimming things in garden and had re-pulled her already pulled muscle in her lower back and was hobbling around – 'look at the state of us' both I said! Returned home and took paracetamol and ibuprofen and managed to sleep through most of the night. I really didn't think I would be able to get out of bed on Monday morning, but managed ok and went to work, but was incredibly frustrated as I normally walk extremely fast and was not able to. Driving is ok today, but getting in/out of a car is very slow. Just to make you all laugh, I attempted to look in the mirror to see if I had a bruised, blue bottom, but can't see any bruising yet! I feel like I've been hit with a lump of concrete! Hope it gets better soon – I can't be doing with slow walking!

MORE PICTURES AND VIDEOS TO FOLLOW
Posted by Penny Clarke at 23:18