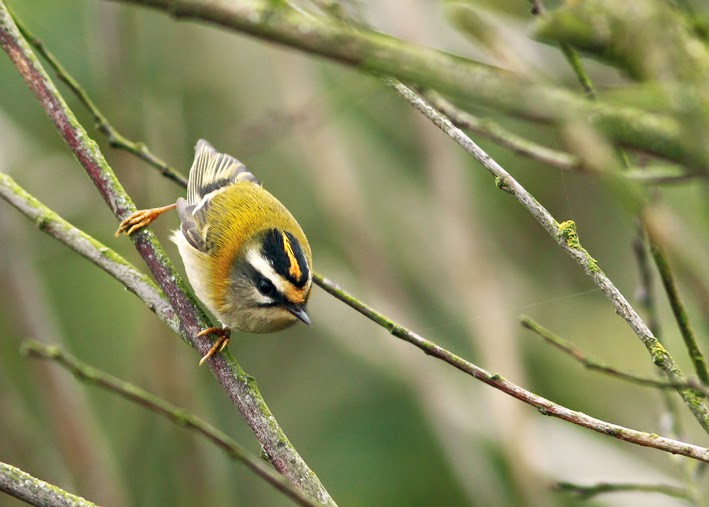 I was up at just after 7am and with coffee to wake me, I started writing my blog post for yesterday – it took me about two hours to type up! Wrapped Pete's birthday presents, had shower, put face on etc etc. Had to phone Anglian Water for my Mother and sort them out.... long tedious story! Left my house by mid morning.

Arrived at Garden Drove, Warham to meet up with birthday boy Pete and Graham. They were just walking back to the concrete pad when I arrived and they had seen the Red-breasted Flycatcher, but no sign of the Icterine Warbler. A lovely lady approached me to shake my hand and told me she reads my blog, lovely to meet you! There were loads of people around, goodness knows what it would be like if it was the weekend! Please be aware of where you are parking here, as the farmer/workers need to get access to their machinery/vehicles and need to be able to turn round on the concrete area. After giving Pete his card and pressies, I was most taken back to receive a lovely present from Graham – a silvery, sparkly bird brooch which I have pinned to my binocular strap – can't remember the last time anyone bought me jewellery! Chuffed to bits, thanks Graham! LGRE appeared and chatted briefly before leaving.

Pete and Graham joined me to walk along the track again, but I didn't see the RBfly when I got to the bottom. Spotted Flycatcher sitting on the hedge west of the end of the track. We then walked west to the pit where I had the 'bird party' yesterday, but didn't see a single bird in there today, very disappointing. It was really hot, clammy and muggy which I wasn't expecting. We walked back, followed by at least 7 loose dogs with no sign of owners, racing round everywhere and raising my temper and blood pressure. Get me out of here!!! Walked back up the track to our cars and spent a while chatting to other birders about all kinds of stuff including, did anyone know WHO suppressed the Short-toed Eagle (none of us did) and what we all felt about this (not repeatable on here!). 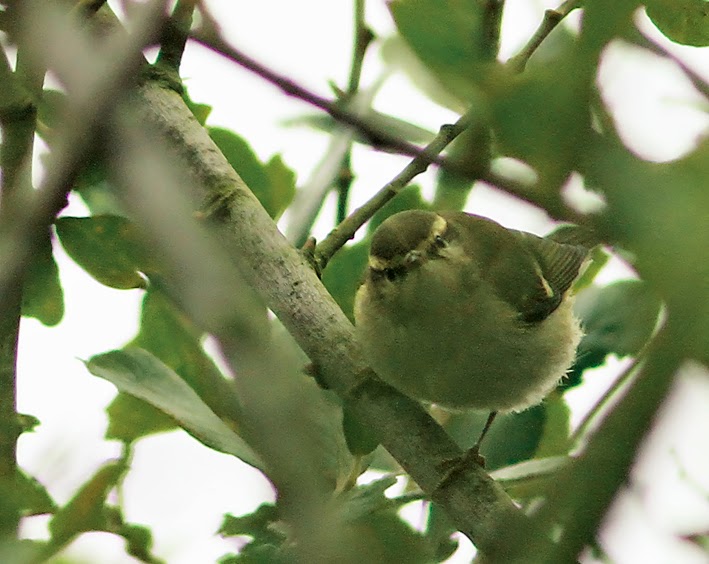 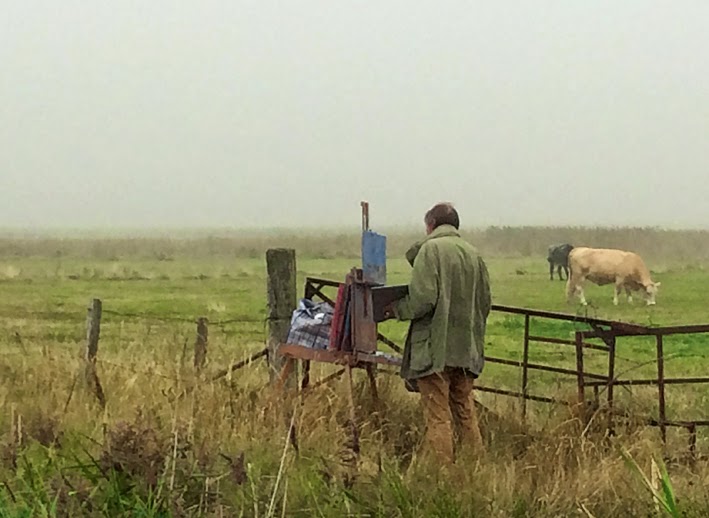 Artist painting in the mist at Salthouse.

We then went off to Cley Visitor Centre for Pete's birthday lunch. Had fits of giggles attempting to take a selfie on my camera! Graham kept messing about (no change there!). 4 cups of tea later (not me) and off we went to Salthouse to see the Yellow-browed Warbler. Parked the car on the edge of the lane (can't remember name now) and as I stopped the car, a local birder gave me a tip off 'sit down and the bird will come right out in front of you and tell people to shut-up'. At the big sallow I sat down and waited. Only a few people here, but a few moments later a man and then a lady came up and stood and chatted and chatted and kept going constantly – I was close to doing an 'Eddie' I can tell you (sorry E.! x). I don't understand people who come to see a good bird and then stand there and chat about all kinds of stuff and they are not actually looking at the bird – whilst they were chatting, the bird flitted about round the back of the bush and only occasionally came to the centre. I was not able to photograph this bird well at all, only achieved a record shot (see above). Fabulous, striking little bird to watch though. I can't remember what time the sea mist rolled in now, but it was pretty thick now and you could hardly see in front of you! All three of us took another selfie for a laugh and were in stitches again! Pete and Graham left early to go out on a lad's night out/dinner etc and I continued birding alone. 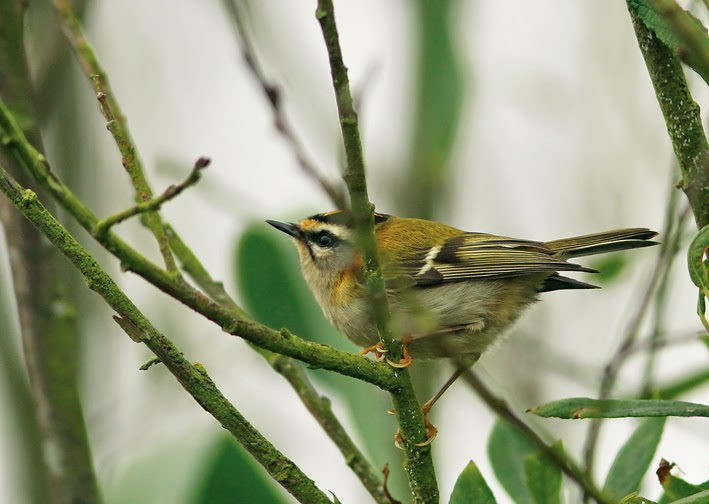 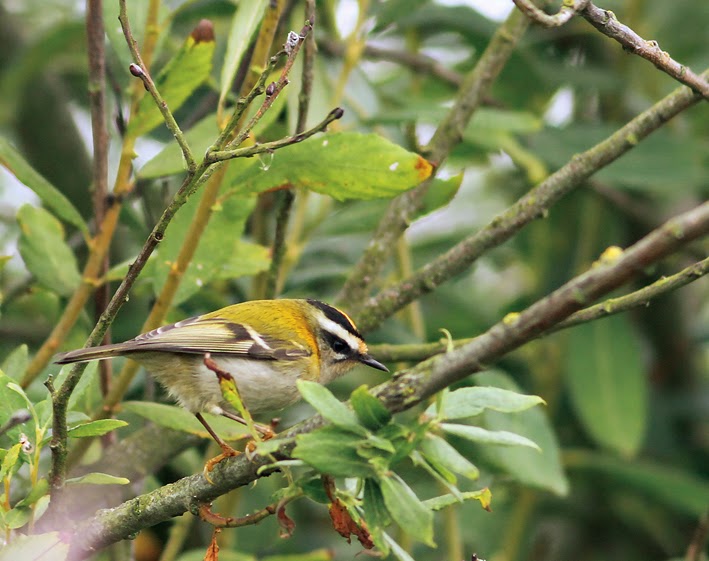 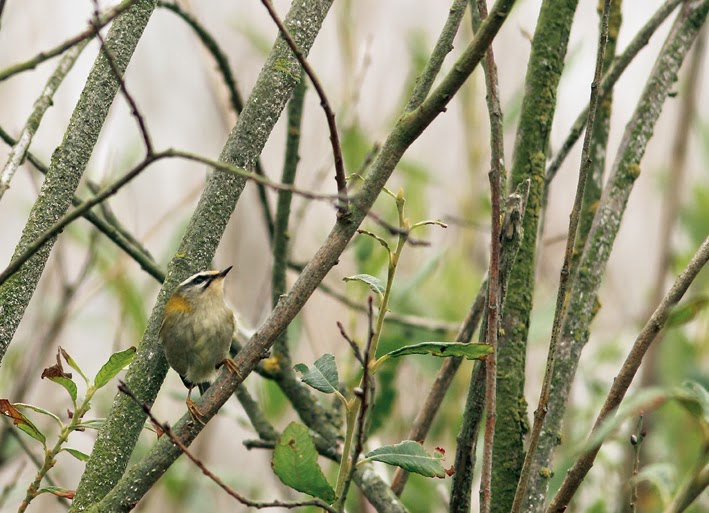 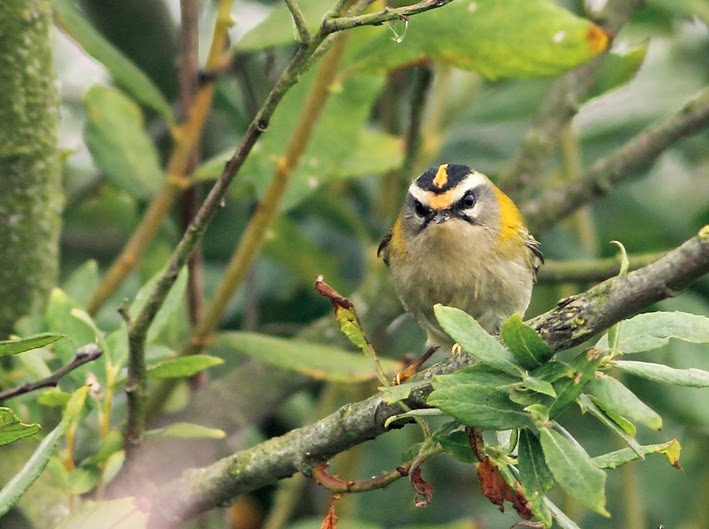 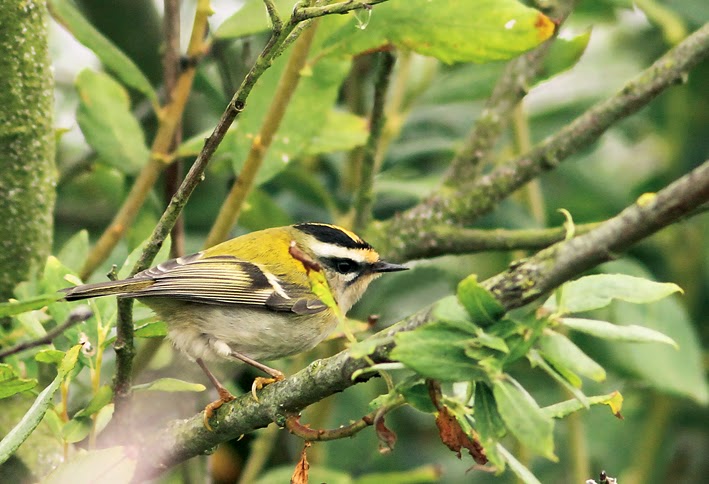 
So off I went to Dauke's Hide NWT to see the Firecrest which was reported here earlier. I didn't expect it to still be here in all honesty, but as soon as I rolled up, there it was, right in front of me.... flitting about in the willows, furiously feeding and completely unphased by my presence. There was only one other birder here and both of us remained silent and enjoyed this magical little gem! A vividly striking and stunning little bird – I love the description of this bird that a friend once wrote: 'For me, Firecrest is the near-perfect bird, a tiny agile, paint box bundle....' It was constantly on the move and never stopped – catching flies one after the other – this proved a challenge to photograph, even though it was only yards in front of me! There were at least two if not three Cetti's Warblers in here and one of them chased the Firecrest around a couple of times! Oh and a Sparrowhawk bombed through low, which made everything dive for cover for a short while. A bit later Eddie and another local birder (Steve I think his name is) turned up to enjoy this cracking little bird. There was a Wheatear perched on the roof of Avocet Hide which looked odd in the mist! I did look out of Dauke's Hide, but dense fog mean't I could only see silhouettes of birds in the foreground, so shut the flaps and came out! I did shut them Eddie, honest!

Eddie, Steve and I then decided to blitz Walsey Hills – there just had to be a Yellow-browed Warbler in there at least! There were no cars at the carpark and the thick mist seemed to have sent birders home, which I didn't understand, this was the time to search for birds! We skulked and walked silently and slowly along the bottom path. Lots of movement and lots of birds seen, but nothing rare: Willow Warbler, Chiffchaffs, Lesser Whitethroat, Garden Warbler, loads of Blue Tits (never seen so many!) and Great Tits, Long-tailed Tits, Chaffinches, Hedgesparrows and at least 2 Cetti's Warblers. Eddie and Steve saw a Hobby at the back of Walsey when I was standing by the willows. Couldn't believe we didn't see or hear a Yellow-browed Warbler. There must be one in there somewhere! Very dense cover at Walsey, probably loads of stuff hidden away, waiting to surface... maybe tomorrow! Eddie and Steve left and I went through the middle and bottom path again, refusing to give up, but didn't see anything different.

I returned to Salthouse at about 6.45pm and luckily saw the Yellow-browed Warbler again at 7pm along with Eddie, but light dire and mist even denser. I left and went to sit at Coastguards to have a coffee and my tea whilst watching the shingle, fenced area in the last moments of light – may be crazy, but there might have been something lurking in there, ok there wasn't but I tried! Left here at 8pm and arrived back home at around 9pm.
Posted by Penny Clarke at 23:57