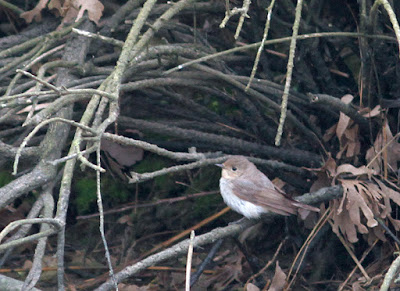 
I had Blakeney Point hip ache this morning and I didn't rise very early at all! I eventually ventured out of the house to search Burnham Overy Dunes for migrants. I don't why I bothered to be honest, it was a strong north wind and it was freezing, I had scarf and gloves on and I still felt cold as I walked along the track. I totally agree with what Chris Mills was saying on twitter recently, about the atrocious scalping of the sea wall at Burnham Overy Dunes – the entire bank, all the way to the end of the boardwalk has been stripped back to soil in a lot of places. It has ruined the bank and as he also said, gives dogs and people more excuse to run riot down the slope, into the sueda and onto marsh, all of which I witnessed today. It looks a complete and utter mess – its not the city, its not a park, its wild and beautiful and holds so many plants and insects and in turn feeds hungry migrant birds. I cannot see any logical, sensible reason as to why this has been hacked to pieces! Anyway rant over. I had several texts from birding friends today with words like 'crap birding, crap weather' – lots of people seemed to be in the doldrums! 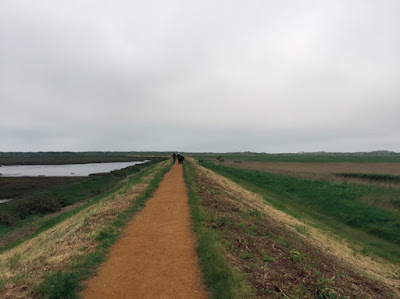 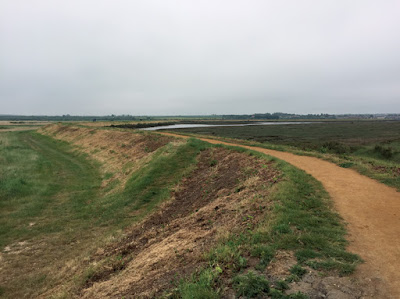 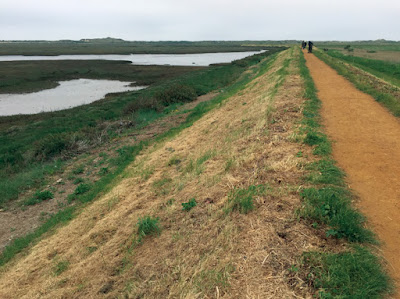 Along the track I heard a Whitethroat singing, lots of Swifts flying over the pool east of the sea wall and a handful of Linnets. Greylags, Lapwings and Redshanks were on the marsh and that was it! There were more dogs than birds! It did amuse me that people were wearing their trendy shorts and dresses for the bank holiday weekend and then complaining of the cold! I was dressed up in winter clothes and chilly! What do they expect, its Norfolk! Ok, its May – but since we don't really have seasons any more, it can be freezing one minute and hot the next. The weather forecast does not look hot for the rest of my holiday either! At the bushes at the end of the boardwalk there wasn't a single bird to be seen. I sat on the dune above the apple tree so that I could watch the fence line that runs east as well and poured myself a coffee. Nothing in my apple tree or anywhere else. It was so cold and dull I didn't go any further. I gave up and walked back to my car. However I did get a nice surprise on the way back – a Bittern boomed a few times!

Back at my car, I put the heating on full and headed to Holme to visit my Mother. Picked up some bread for her from the farm shop on the way. I spent a long time at Mother's house and we had a good chat about all kinds of things. The pager bleeped off every now and again with 'spoonbill' and 'little gull' etc – nothing to entice me out of my chair! I was just thinking of going home when the pager bleeped up at 6.38pm with 'Red-breasted Flycatcher at Titchwell RSPB at 6.10pm and showing well....' !!! Off I flew! Mother didn't want to come and to be honest I'm glad she didn't, it was even colder later on.

Parked the car up in the side entrance for speed and headed off up the main track with camera in bag. I passed a few birders who were strolling back and looking happy with their fill of the Red-breasted Flycatcher! I was kindly told that it was on the edge of the island at the brackish marsh. I jogged every now and again and eventually joined the last man standing, who was Ian Lycett (works at Birdwatch) who had very kindly had seen me coming and waited so I could like through his scope. My initial view was the worst view ever of an RBFly – it was sitting hunkered down behind brown vegetation on the edge of the island – it was camouflaged beautifully. Ian told me it had been sitting here motionless for the last 10 minutes. I would never have found it had he not waited, so thank you very much indeed. 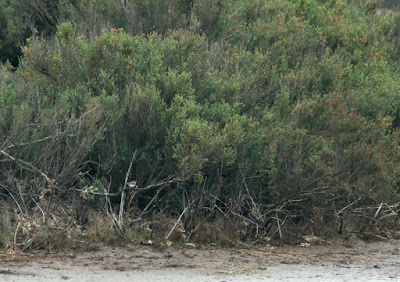 Red-breasted Flycatcher distantly on the island
You'll need your glasses or magnifier out! 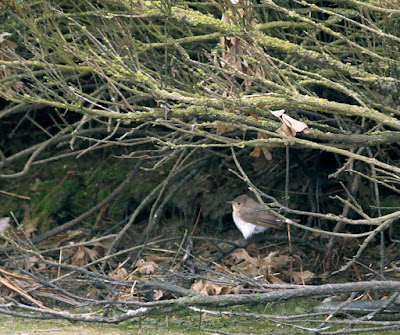 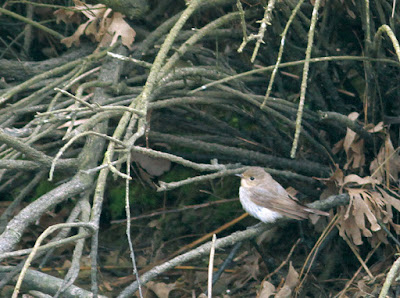 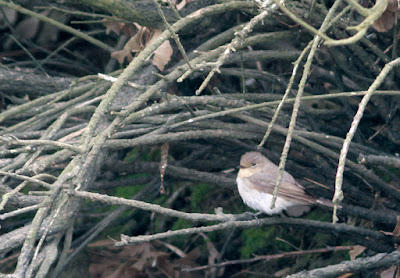 Shortly after Ian left, the flycatcher started to feed and flicked around catching flies back and forth from the mud. Photography from here was atrocious with my 300mm lens, so marched quickly back to the car to get my scope so I could phone scope/video (should have brought the scope in the first place!). The light was dire, there was heavy mist and it was spitting with rain every now and again. I managed to get some distant video and then the bird disappeared for a bit. A couple turned up to see the bird and they luckily did see it. The Red-breasted Flycatcher then re-appeared in the sueda in the corner close to the path!!! I got some better SLR shots but still not good in the failing light. But, the phone scoped video I was about to take looked top notch – the bird filled the screen, just as I put my finger on the play button the phone went black! Frustrated was an understatement! Long story short, I discovered that iphones switch themselves off if they get too cold! I warmed the phone up in my pocket and tried again, but as soon as I got the phone on the scope it switched itself off again! So I lost out on what would have been fab video footage, although I did manage to get a few seconds of footage at this close range. The couple left and the bird returned to the island and was then out of view. A single man turned up and also very luckily saw it when it appeared again later. I stayed to watch this fabulous little bird until 8.50pm. Bird of the day, in fact the only good bird in Norfolk was this wonderful Red-breasted Flycatcher!

Popped into Mother's briefly just to show her my video and then drove home tired and still cold. Serious thermals and serious birding tomorrow!
Posted by Penny Clarke at 23:49