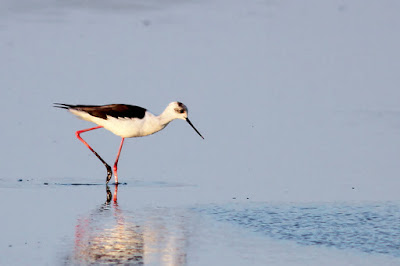 Another scorching hot day and I managed to get out at a more respectable time this morning! Started off at Burnham Overy Dunes to find some migrants. Along the hedge lined track at the start of the walk, I heard Whitethroats, Blackcaps and also watched a Chiffchaff singing – it was posed perfectly on a branch, but at the precise moment I had my finger on the shutter button, it nipped off! Further along the track, Sedge and Reed Warblers were singing and a Cuckoo called. Lapwings, Greylags and Egyptian Geese were on the marsh and hares were enjoying the sunshine.

I passed a few disappointed birders, who had been out here since dawn and quote 'no passerines or migrants of note' aside from a few Yellow Wagtails going over. But a short while later I bumped into Dave Foster (from Wells) and he kindly reported a Garden Warbler in the bushes at the end of the boardwalk and also a couple of Whinchats and a Ring Ouzel. When I reached the main bushes, I sat down in front of the apple tree and waited – I didn't have long to wait for the Garden Warbler to appear, but again as the earlier chiffchaff, it nipped off and flew across the fence line out of sight, so no picture there either! Also had brief views of a Lesser Whitethroat.

I watched a lady cycling along the sea wall with two young cocker spaniels running with her – well they were not running with her exactly, they were running wherever they wanted to and on a mission – a while later I was walking through the dunes and saw these two spaniels racing on the south side of the fence (where they were not supposed to be) and heading for Holkham pines – I could see the lady in the very far distance standing on a high dune with her bicycle looking for the dogs – they were out of earshot and she was a long, long way from were they were running in the opposite direction – I fully expect that these dogs would be reported as lost or taken in by someone. I just don't understand why some owners cycle with dogs and not be in control of them – its not fair to the dogs, who were obviously happy, but got lost and it would have been distressing for them. I reported this to National Trust Warden Andrew Bloomfield – who said it is a constant problem at Holkham and Burnham Overy. In all my time here today, I only saw ONE dog that was being beautifully walked on a lead along the sea wall – all other dogs were off the lead, some in control and others racing all over the place, including inside the fenced off areas.

I walked east through the dunes and saw no birds at all, apart from a few Linnets and Meadow Pipits. I did see a Small Copper on a dandelion and Peacock and Red Admiral Butterflies. I searched all the gullies and really worked hard to find something. I sat myself down under the coolness of a pine tree with a brilliant vantage point, overlooking the very large gully, immediately next the edge of the pines – I could also see the large sycamore to my right as well. Had my lunch here, whilst watching for anything exciting to appear. The only real excitement I had was a massive shaggy dog that unexpectedly appeared, towering above me just a yard away from my head! Heavy panting and showing off its teeth didn't do my blood pressure any good at all! I called out 'Hello' to see if any owners responded, but nothing – I started to worry, when suddenly the dog got bored of looking at me and turned and headed back to the path thank goodness – shortly after this I could see it had joined its owners further along the path, who were obviously unaware of my short but distressing encounter – like I keep saying 'Dogs in public should be on a lead'!!! Birds seen here were Whitethroats, Robins, Hedgesparrows, Chiffchaff, Linnets, Kestrels x 2 and a Common Buzzard and Marsh Harrier (over the marsh). Birds improved on the return walk, which included a nice pair of Stonechats, Cuckoo calling and 4 Wheatears just east of the end of the boardwalk (not there earlier) and also nice views of a female Ring Ouzel in the same area. However, there were no new birds in the bushes/apple tree. It was now extremely hot – on the way back I heard a Bittern booming east of the sea wall at 12.40pm.

I wanted to see the Black-winged Stilt at Cley NWT again, so headed east. Stopped at the NWT visitor centre, where I bumped into Andy J – joined him for a cup of tea and a bought a very yummy ice-cream – we sat outside on the new seating area and waited for something spectacular to fly over (ha ha) – only birds seen overhead were a heron (pity it wasn't purple) and hirundines. Two Common Buzzards were spiralling overhead as I left the car park.

It was the wrong time of day for photography and I needed a siesta! Re-located to Coastguards car park and searched amongst the cattle for wagtails, but surprisingly couldn't see any at all, only a few Meadow Pipits. Reclined my car seat and dozed! Still no wagtails when I woke up. Visited Walsey Hills NOA for a short while, which produced Chiffchaffs, Blackcaps, Marsh Harrier overhead, Sedge Warbler, Cetti's Warbler and the usual Chaffinches and also several Speckled Woods.

Drove east and parked the car to walk to Babcock Hide NWT. A Stoat scurried along the path as I walked to the hide and two Barnacle Geese were with Canada Geese and Egypitan Geese on the marsh. A beautiful scene of birds from the hide including: Ruff, Sandwich Terns preening x 2, Black-headed Gulls (lots), Lesser Black-backed Gull, Gadwalls, Cormorant, Shelducks, Teal, Little Egrets x 2, Black-tailed Godwits, Redshanks. As I discussed with the only other birder in the hide – the muddy edges of the forefront of the pool looks brilliant for close birds such as wagtails or sandpipers etc, but none were seen! I had brilliant views of a Siskin feeding on alexander plants at the far eastern end of Walsey Hills after I left here. 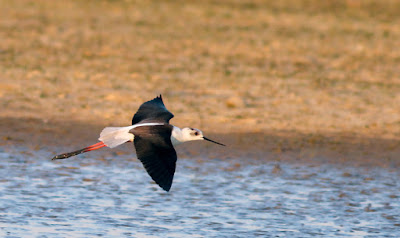 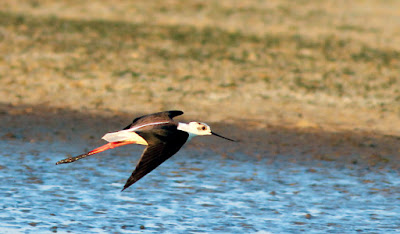 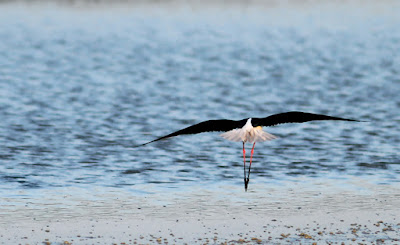 
Went to Teal Hide NWT and spent a good while here with stupendous light, enjoying the fabulous Black-winged Stilt, which was much closer to the hide than it was last night! I obtained much better pictures than yesterday, including a half decent flight shot. Same birds as last night, including several striking Ruff, Greenshank, Avocets, Black-tailed Godwits etc. I didn't see any of the Temminck's Stints whilst here or the reported Curlew Sandpiper. 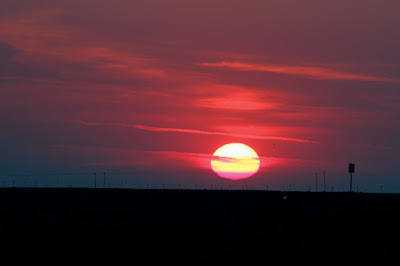 Watched the sunset from Coastguards before returning home. With rain forecast on Tuesday with easterly winds, some serious birds could be dropping in. If I wasn't at work, I would be walking Blakeney Point on Wednesday!

MORE PICTURES TO BE ADDED
Posted by Penny Clarke at 23:49