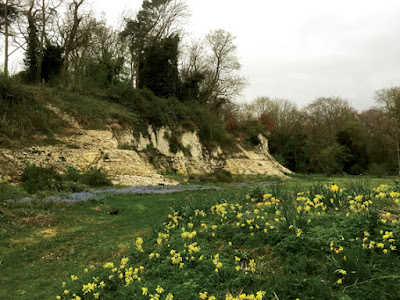 
I felt exhausted this morning and didn't get up very early at all. With good numbers of Ring Ouzels along the Norfolk coast, I decided to search for my own. The slopes of Ringstead Downs are an excellent place to find Ring Ouzels and I felt pretty sure there would be some there.

The parking area for the 'Downs' has been enlarged considerably – there was only space for approximately four cars before. Two large 4x4's arrived seconds after me, with loads of dogs piling out for their late afternoon walk. I set off along the track in search of migrants. I had the place to myself as the dog walkers headed towards the chalk face and picnic area. It was a very dull afternoon with rain filled clouds looming.

Considering the dull weather, I saw a good number of birds. Five British White Cattle were grazing the slopes of the Downs and there was a notice up stating this at the gate, with a 'keep dogs on leads' notice. The cattle did not seem bothered at all when I ambled past them. Chiffchaffs and Blackcaps were both singing as was a Mistle Thrush. I had good views of a female Blackcap later on. I had both Great Spotted Woodpecker and Green Woodpecker in the tops of the trees on route. There were several Robins and Blackbirds gathering food on the slopes. I saw a Mistle Thrush, Song Thrush and a single Swallow over the farm buildings and a Pied Wagtail on a roof. Bees were collecting nectar from nettle flowers. There were some lovely clumps of 'Lords-and-Ladies' and some Periwinkle flowers. I could not believe there were not ANY Ring Ouzels!!! If they are elsewhere in Norfolk, I have always found them here! Very disappointing not to have found any. 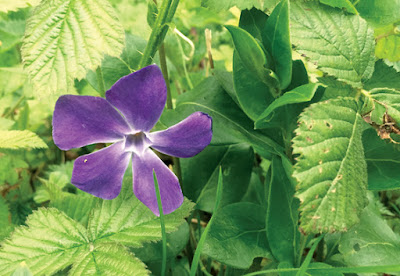 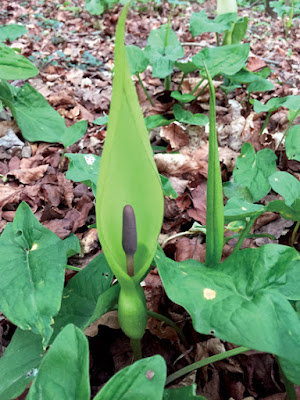 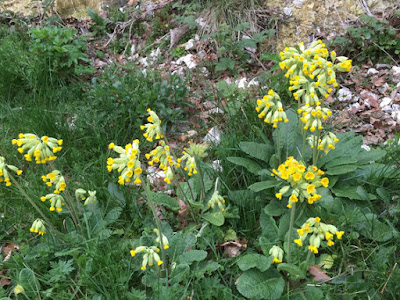 Just before the chalk face and gate at the north end of the downs, I witnessed a Sparrowhawk chasing a mistle thrush, but thankfully the Sparrowhawk failed! Around the corner of the farm buildings I watched several birds feeding on the edge of a sloped ploughed field, including: Red-legged Partridges, Hedgesparrow, Linnets, a single Yellowhammer, Greenfinch, Chaffinch and some Goldfinches in the elders adjacent to the field. On the way back I had a Common Buzzard circling overhead, a Kestrel hovering and two Greylag Geese flew over. A single Long-tailed Tit was seen, along with Great Tit and a Blue Tit. Bird of the day was a Whitethroat 'tacking' and seen in an elder bush about half way along the track. 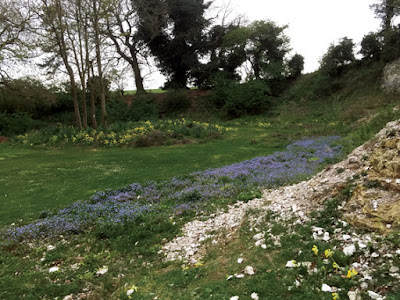 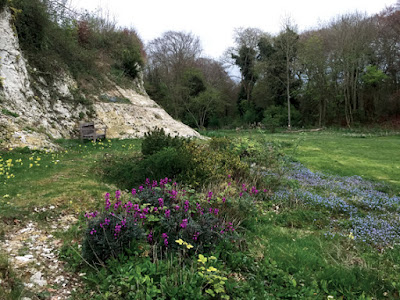 
I made my way through the trees to the picnic area and chalk face. It was very pretty here with lots of cowslips, carpets of forget-me-knots and other flowers. There are picnic tables and a bench here and its a very scenic spot. Unfortunately it was spoilt by a very selfish dog owner, who had not cleared up mess, left right bang in the middle of this pretty scene – disgusting, even more, so if any children come here to play over the next few days. I have always imagined a wallcreeper adorned over this chalkface, wouldn't that be incredible!

I headed back to the car and noticed the fabulous array of colourful bluebells in the woods on private land, on the left hand side of the path just before the car park. How lucky was I, it started to rain pretty heavily just as I opened my car door!
Posted by Penny Clarke at 23:10