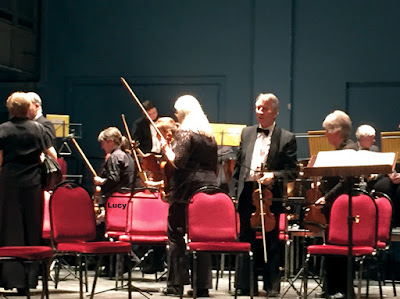 My sister Lucy attended the Royal College of Music in London many, many years ago – her first instrument is violin and second is piano. Lucy has had to cope with so many tough things in her life, which is way too long a story for now. She hasn't played in an orchestra for about ten years, although she regularly plays her violin at home. Recently, she decided she wanted to join an orchestra again. For the last couple of months I have been taking her weekly to rehearsals with the Norfolk Symphony Orchestra and tonight along with my youngest sister Vivien, we watched her play violin at the Corn Exchange in King's Lynn. I am so proud of her and what she has achieved, it brought tears to my eyes and it was so nice to see her name in print in the programme. For anyone that's interested, here are the details of the concert:

One of the most popular and well loved pieces in the classical repertoire - Dvořak’s ‘New World Symphony’ will be performed alongside a rare concert hall outing for Stravinsky’s witty and boisterous Jeu de Cartes, his ‘Ballet in Three Deals’ based on the card game of poker. Joining them will be Elgar’s masterpiece of a symphonic poem for strings.
Posted by Penny Clarke at 23:03