Being as I am crazy, I went on a little venture this evening!

Beach Road at Snettisham was blocked and closed off, as were roads at Heacham and also road to Searles at Hunstanton.

HUNSTANTON – Parked up at the Bowling Green and ran down to the Cliffs viewing point where the sea was lashing over the promenade.

HOLME – The sea has flooded through the golf course, past the Firs Road and almost up to the bridge over the River Hun by Brook House. This is not good news for Holme Reserves!!! Don't suppose we will know the severity of the damage until daylight! I presume Staff at The Firs NWT were evacuated. I could only get as far as the horse paddock just past the bridge – there were a couple of people with torches assessing the situation.

THORNHAM – Staithe Lane that leads up to the Coal Barn was completely flooded with sea water, again not a good sign for the reserves. I then drove past the Lifeboat Inn and just before I turned right to get back on to the coast road, I could see that 'The Green' up to Church Lane was also flooded with sea water and debris.

TITCHWELL RSPB – Walked along the main footpath with a torch up until the first seat!!!! There was seawater and debris all along the footpath!!!! Several fallen branches along the path. Pointing the torch, I couldn't really see the state of the reserve on either side, but the wind was howling and I could hear the sea! Decided I was absolutely insane and ran back to my car!

BRANCASTER STAITHE – at 'Harbour Way' there was tons of debris across the road – clumps of grass and other stuff! 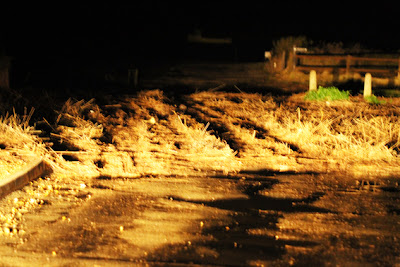 Drove back to King's Lynn.

http://www.fakenhamtimes.co.uk/news/north_norfolk_area_10pm_update_residents_in_tears_at_walcott_cromer_seafront_badly_damaged_1_3081229
Posted by Penny Clarke at 23:55