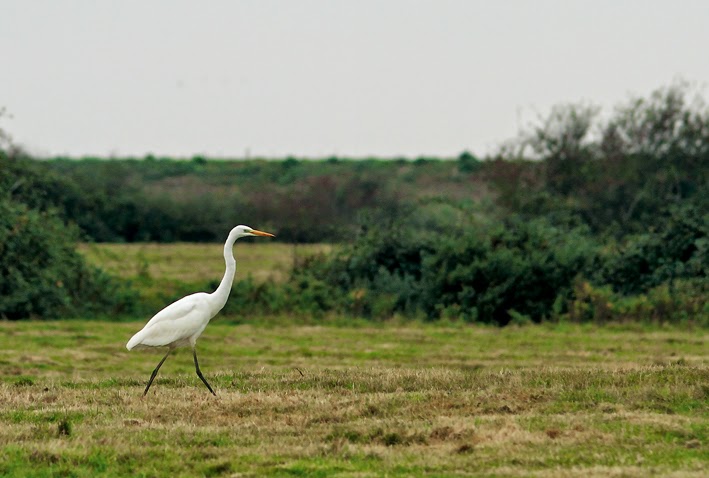 
Garden Drove, Warham Greens
Arrived at the concrete pad, Garden Drove at 8.30am. It was very cold, but sunny and it was great to be out birding again. A very familiar car was parked here already.... James Mc! This famous track is just so good for birds – I don't really know why it is – maybe its because it has a real mix of trees, bushes and vegetation, its sheltered and with the copse of the end, its 'hot, hot birding'!!!

Along the track, it was alive with birds, including good numbers of Chaffinches – a male Blackcap put in a brief appearance (at the section of the track which zig zags with the fallen ivy covered trees), a male Great Spotted Woodpecker called and landed on a high sycamore branch before flying off south. A tit flock appeared with Long-tailed, Blue and Great Tits and with them was a single Goldcrest. A few Blackbirds scattered as I walked along and also several Robins which I carefully checked, several hedgesparrows and one Chiffchaff! I had just reached the large sycamore tree near the end of the track when I was aware of a presence behind me! Kieran Nixon and friend John had crept up behind me. Together we heard and saw Bramblings high up in the sycamore along with some chaffinches. In the copse at the end a female Blackcap appeared in a hawthorn. I have never seen so many Wrens as I did today along this track, every LBJ that moved, blossomed into a Jenny Wren! James McCallum then joined us. Very unusual to hear the James had not seen as much as we had! I found it most interesting that we had all seen birds at different times – Kieran and John had seen 'loads of thrushes scattering' as they drove up the track, but I had seen none when I drove up a bit earlier. James had seen none of the warblers... as he said, he had probably been too early for them. We chatted briefly and then all split, James went west, Kieran and John went east and I stayed put! I spent a while here watching and trying very hard to find something really good. A couple of Jays flew over as I made my way slowly back along the track. Lots of Blackbirds scattering from the hedges and also equal numbers of Robins. I just caught a glimpse of my first Autumn Redwing which flew up the track and landed momentarily on a dead branch before flying off. Found another male and female Blackcap together. In the puddle at the end of the track by the concrete pad, Robins, Goldfinches and Hedgesparrows were coming down to drink. James caught me up and we saw a Grey Wagtail fly over and also a Common Buzzard being mobbed by corvids. More Jays flew overhead. James left to walk to one of his favourite places. Sat in my deckchair to have lunch – I had no intention of staying here as long as I did – don't where the time disappeared to! I watched a female Blackcap coming down to the puddle to bathe, 2 Meadow Pipits landed on the dead tree with 2 Pied Wagtails and also a Garden Warbler showed briefly in a hawthorn, which was a nice surprise. I drifted off and had forty winks and was woken by a very noisy Robin who was perched only a few yards from my head and looked at me as if to say wake up – it continued to serenade me until I moved! left here at 12.50pm.

Wells Woods
I drove along East Quay to stop and watch the Rose-coloured Starling garden bird feeder – remember that? The feeders were full of House Sparrows, busily feeding, chirping, socialising and bathing in the bath – love to watch these birds! Nothing else more colourful appeared though.

I would have been walking Blakeney Point this afternoon if my ankle had allowed me to, but it's not strong enough to be plunged and twisted into shingle for 10 miles! So I decided that Wells would be a safer place to search for migrants, even though I hate paying to park. Scraped together £3.00 for a 3-hour ticket and set off in search of goodies. I skulked around and covered all areas – crept down into the 'Dell' and pished, squeaked and whistled to find a 'bluetail' – there was quite a few birds in here, mostly Long-tailed, Blue and Great Tits along with a few Goldcrests, a Chiffchaff and a beautiful Treecreeper. Several Jays flying over. I was surprised I didn't see or hear a YBW whilst here. Bumped into a bird touring party who suddenly realised I was the 'lady that has the website' – nice to meet you all and hope you had a fab day's birding. There wasn't much bird action outside of the Dell area and there were no birds at the drinking pool. Very poor all round compared to Garden Drove earlier on.

Wells Lifeboat Station
Re-parked the car closer to the cafe to save time – I had 15 minutes left of my parking ticket. Nipped over the seawall to check out the underwatched scrub and buckthorn next to the lifeboat station. A Blackbird flew off from underneath a buckthorn bush and next to the station itself I flushed a Wheatear! Whilst admiring the amazing view of all the waders on the mud flats between here and East Hills, I noticed there was a massive flock of Golden Plover. This reminded me of something Dawn Balmer was talking about the other day... something about counting Golden Plover.... and I turned round to see Dawn, her husband and daughter walking towards me! When I think about Red-flanked Bluetails they don't appear and walk towards me! Huge numbers of birds here including the huge flock of Golden Plover, same of Oystercatchers, Brent Geese, a Grey Plover, Redshanks, Gulls and a single Avocet. I scurried back to my car before the ticket man got me!

Stopped along the quay for chips, yummy! As I drove along the coast road, I was trying to decide if I had time to bird Burnham Overy Dunes – well at least to try and see the Great White Egret that had popped up on the pager a few times today, having been seen east of the seawall. I guessed the views of this bird would be distant out in the marsh. The sun had gone in and it was dull and grey weather for the rest of the evening.

Burnham Overy Dunes
It was now 4.15pm and was far too late to walk out here really, but I had to give it a bash, afterall I was at work tomorrow, no chance again until next Saturday when I am then on holiday for a week – can't wait! I started to walk down the track and just as I reached the stile I glanced to look along the hedgerow and the big field on my left, when I saw a huge white bird – OMG!!! There was the Great White Egret strolling along the bottom of the hedge towards me!!! I couldn't believe it – best views I have ever had of one of this monster birds! How people can mistake Little Egrets for these I will never know, the size difference is massive! Anyway it carried on walking towards me, searching for food and suddenly it spotted something.... and stabbed into the ground and caught a mole! Awesome to watch this bird – it must have clocked me, as it started to look a bit restless – I had kept still enough and was kneeling by the gate with camera balanced through the bars, but suddenly it flew off to the furthest side of the field. I don't expect I will ever get that lucky with a GWE again! Wow! 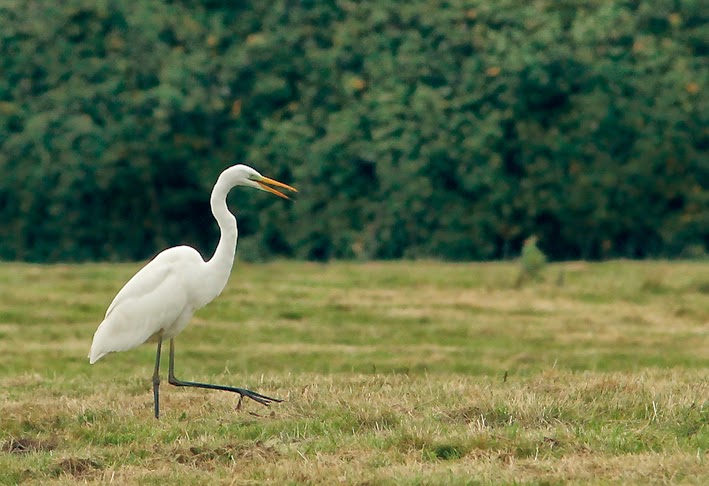 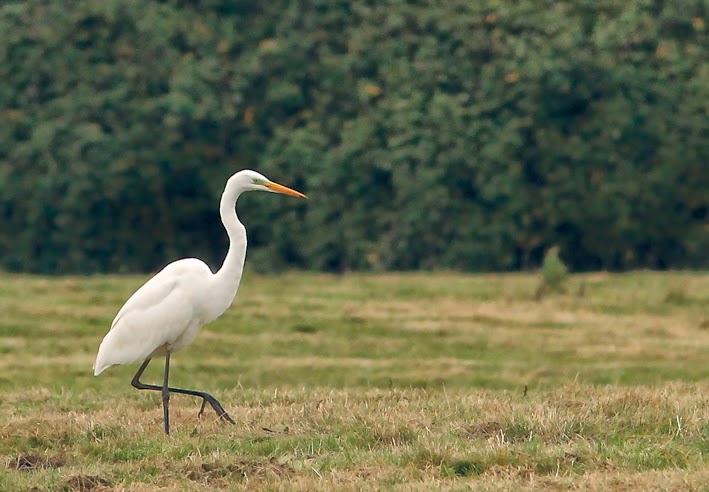 I continued along the seawall to the 'magic' (as Stuart White called them recently) bushes and only found a Chaffinch and a Robin here. Nothing else of note on route and no birds on the pool east of the seawall. So now I had a choice.... either Gun Hill or walk east as far as the recent 'Barred Warbler' scrub. I decided to walk east for a change. Had a look in the hollow where the RBFly was recently, nothing. Got to the scrub where the BW was and again found nothing.... but then got really excited – a LBJ bombed out of a bramble and into another. I walked up to the bramble and kept my eyes fixed – the bird appeared, it was a Robin! Saw a few Grey Partridges on the way back and a Kestrel.

Got back to my car with just enough light to still see. Drove to Ringstead to buy some sacks of sticks for my parent's fire, went to Holme, dropped sticks off and spent a while chatting to parents before returning home. A cracking day for general migrants, even though nothing mega was seen. Bird of the day was most certainly the awesome views of the Great White Egret. A 'Great' Day all round!

MORE PICTURES TO BE ADDED
Posted by Penny Clarke at 23:21