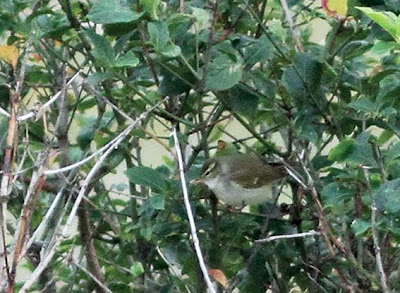 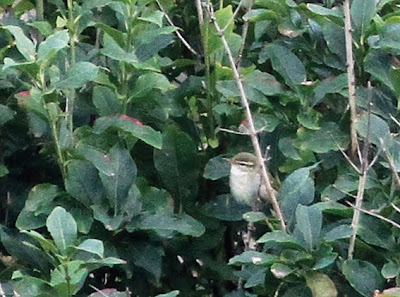 On news of a possible Isabelline Wheater (thanks Stuart!) I left my photo editing and flew out of the door and off to Burnham Overy Dunes! There is so much slow traffic when you want to see a bird - tractors, Sunday drivers bla bla bla! Eddie had beaten me to it from Cley! Pulled up at the same time as Julian Bhalerao and Duncan McDonald and started briskly walking down the track to then hear disappointing news that the Wheatear was in fact a Northern Wheatear! Julian and Duncan walked back to the car, but I stubbonly carried on to join Eddie who was sussing out the wheatear! I passed RM and Steve B. on route who updated me also. I turned right (east) at the end of the track and walked along the dunes. Eddie called me to say there was a pied flycatcher, so at least I had not walked all this way for nothing! So with a spring in my step now, I carried on. When I got within 50 yards of Eddie, he beckoned me with vigorous arm waving to walk to the far left. He did this several times, so obviously I was not walking far enough left. I thought this was a bit over the top for a pied fly, but gave the bird a wide berth anyway. Eddie then phoned me to say that there was an Arctic Warbler in the same bush!!!!!!! (5.50pm) I couldn't believe my luck! I was so glad I had carried on walking out to the dunes. I was now way ahead of all the other birders who had walked back! There I was, watching an Arctic Warbler at 6pm - WOW! Got some record shots, but the light was awful. Eddie phoned the bird out to RBA immediately and it wasn't too long before other birders joined us including R.M., Steve B., Duncan M., Julian B. and Ashley B. The bird was still showing at 6.45pm. We passed 4 birders (2 men, 2 women) going to the see the bird after us. I hope its still there in the morning.

Had fish 'n' chips in Sunny Hunny on the way back home!

Directions: Approx 200 yards east of the end of the board walk in the little hollow of bushes across the other side of the large flat grassy area.

Nice selection of birds at Holme today I see on:
http://norfolkornithologistsassociation.pbworks.com/w/page/10031663/FrontPage
Posted by Penny Clarke at 20:16