Met Eddie at Coastguards 7am. The sea was very still, not much happening really. A few cormorants flew past, Eddie said that they would be probably be the highlight of the day. A Red-throated diver went west. At 7.38am I picked up an Arctic Skua and 2 minutes later at 7.40am I thought Eddie was joking when he said "WHALE"!!!!!!!! Eddie saw it surface twice - the hump and the small curved fin - probably a Minke he thought (ID'd as a Northern Minke Whale later) - it was going east. I couldn't see it at all, so I then sprinted to the car and grabbed camera, which took me all of a matter of seconds and stood back in place and scanned again, BUT very, very sadly I didn't see it - incredibly frustrating. I put the news out to RBA at 7.42am and soon a few Cley regulars joined us.

We then flew to Weybourne and waited for it there - Steve and Sue joined us. One Arctic Skua was seen, besides several Gannets. 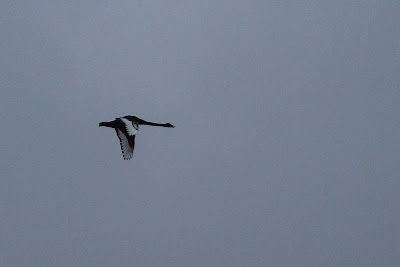 Black Swan flying east at Sheringham.
We then went to the shelters at Sheringham and joined Kevin Shepherd, Phil Vines and another man. John F. was watching from his flat. Very disappointingly we did not see the whale. Apparently it had been seen from the 'Iron Road' after Eddie saw it - don't know who by though. Congratulations to Eddie who has seen whales else where in the UK and all over the world, but this was his first in Norfolk!!! My day improved greatly when Kevin Shepherd picked up a BLACK SWAN - a juv flying south east almost over us (got some pictures) at 9am!!! Two Arctic Skuas were then seen. At 9.30am Kevin picked up a RED KITE in off the sea, going west. At 9.45am the Red Kite turned and went east and crossed over with the Black Swan now going west!!!!!!! - unbelievable that we were seeing a black swan and a red kite in the same scope/bins! I realised how rare it was to see a Red Kite here, when Kevin said he had never seen one come in off the sea!!!!! The sun was now glittering over the waves and the Red Kite looked stunning as it flew against the dark sea - Wow, what a morning! An Auk sp. flew west at 10.17am and Eddie picked up a juv. Shag close in flying west. Several gannets passing through. A turnstone was on the beach along with a young common tern. The action seemed to die down after a while, so we left at 11am.

Phil recommended Roy Boys Cafe (37 Station Road) in the town for a good breakfast, so off we went. I had a fantastic vege breakfast of fried bread, egg, saute potatoes, tomatoes laden with melted cheese, baked beans and toast with marmalade - all excellent for the waist line!!! Scrumptious. Went back to Coastguards where I had left my car earlier. The wind now was very fierce and I could hardly open and close the car door. The sea now looked ferocious. Went to VC for a while and then snoozed in the car in the now hot sunshine.

Had to leave mid afternoon to get back home for a plumber arriving to fit my new shower. All done and completed thank goodness.

Other bird news in Norfolk today: The Little Bittern remains at Titchwell RSPB.

PHOTOGRAPHS TO BE ADDED
Posted by Penny Clarke at 08:51