The weather was dull and uninspiring. I had full intentions of going birding somewhere local, but instead I opted to have a mostly lazy day! Can't drive far anyway, as we are all in Tier 4 now. For some reason I felt very tired. Last night I had put lots of dried fruit soaked with brandy into a bowl, ready to make a new recipe, so had to get this finished.
This evening I made "Mary Berry's Fruit Cake", it seemed to take ages to do, but finally got the mixture into my double grease-proof paper lined cake tin and then added the blanched almonds and cherries and then added a double layer of paper on top, as instructed.
https://www.bbc.co.uk/food/recipes/celebration_cake_61952 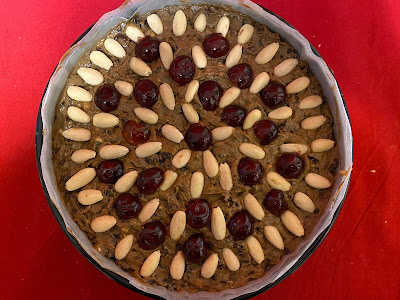 Fruit Cake made and ready to go in the oven!
Mary Berry's Fruit Cake 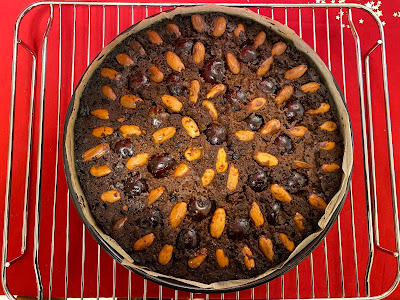 Four and a quarter hours later!
Although the cake came out successfully after four and a quarter hours, something extremely annoying happened – my cake tin is a loose bottomed tin, so there is a ridge all around the tin – part way through cooking, this filled with what looked like butter and then spilt into the oven. I removed the cake and tried to mop some of the butter substance up and it then splattered over the floor!!! Long story short – I won't be using that type of tin again! I suppose I should have at least put a large baking tray underneath, as that would have been easier to clean up than the oven! The spilt butter in the oven then started to smoke after I removed the cake and the fire alarm went off! I now have to wait for the cake to cool, skewer some holes in, dribble brandy in and then double wrap in paper and foil. Maybe I will stick to doing my Victoria Sandwich!!!
Storm Bella is building up, I can hear the wind increasing. Winds of more 80mph have been recorded in the UK today!
https://www.bbc.co.uk/news/uk-55454045
I heard some very sad news yesterday – Sybil Needham, wife of Geoff Needham from Holme very sadly passed away in hospital on Christmas Eve. I know several of their children who I went to Holme school with, including Cindy, Mandy, Debbie, Adrian and Sean. It brought back the death of my mother and how we felt in the first few days – especially since my parents were from the same village and same generation. My most sincere condolences to all families. Rest in peace Sybil 🕊
Posted by Penny Clarke at 23:58