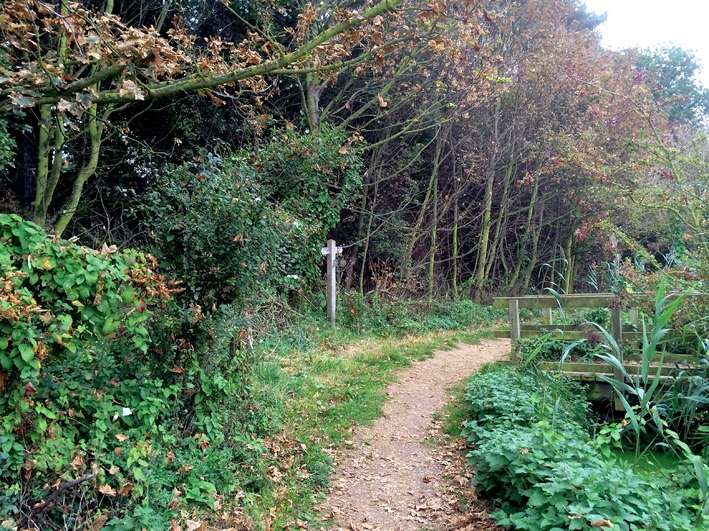 Coastal Footpath, near 'The Green', Thornham.


I spent several hours today, selecting, editing and adding photos to blog and various other sites. I still have loads more to do! There just isn't enough time in the day. I cooked dinner too – can't remember the last time I did this! No time to cook when you are a solo birder!!!

I managed to escape by mid afternoon and rather than join the crowds, decided to go and look for my own birds in the north west of the county.

The Green, Thornham
This always looks such a good spot for migrants, but I've never found anything really good there yet. Turn off the main road just after the Orange Tree Pub (on your left) into Church Street and follow down until you reach 'The Green' (the road off left just before is 'Ship Lane' which leads to the Lifeboat Inn). Park on the grass verge on left hand side (with bench seat) and walk towards the coastal footpath sign and follow the path either west through the reeds and scrub or north along the path which weaves round to a large pond and has a good selection of habitat, including Holm Oaks, Pines, Willows, Brambles, Hawthorns etc – this is part of the outskirts of a large estate.

I could hear a Whitethroat, but found nothing until I reached the pond, a Greenshank was feeding along the muddy edges – I had just got the camera in place and was about to press the shutter button when it flew out and across the marsh – not quick enough! A Spoonbill and a Curlew flew across west and landed near the Thornham Boathouse. A found a few Blue Tits and one Chiffchaff on the way back to my car. 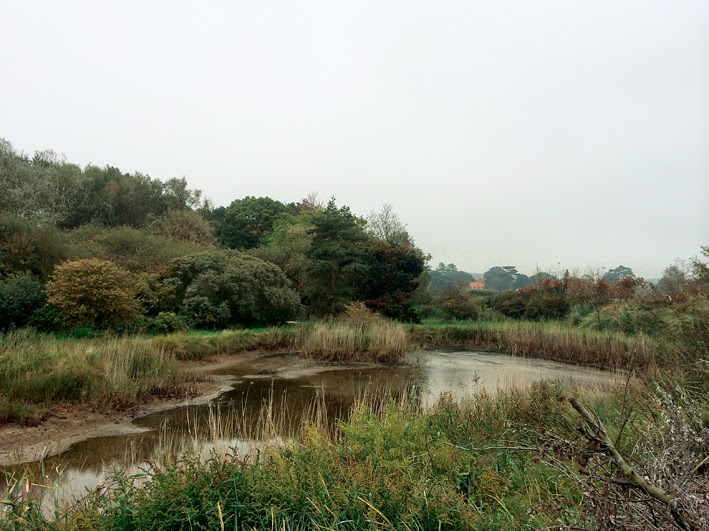 The pond, reached by the Coastal Footpath, near 'The Green', Thornham. 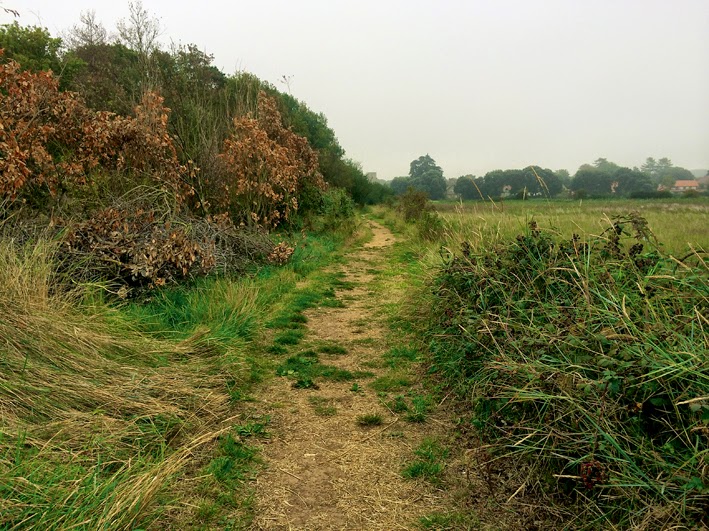 Coastal Footpath, near 'The Green', Thornham.


A lane near Titchwell!
I walked somewhere I wasn't supposed to (according to the sign), so can't divulge, especially as a policeman reads my blog (I must always remember that!) Luckily I didn't find any megas along this lane, but did find a nice Male Great Spotted Woodpecker on a dead tree, a Robin and a Chiffchaff. I was really surprised that there wasn't more to be found along here. The pager beeped off with 'Yellow-browed Warbler west of the harbour at Brancaster Staithe – that's where I was heading next anyway!

Brancaster Staithe
Parked the car on the grass verge at the harbour. Two familiar figures walked towards me – Dave Appleton and David Norgate (they had found the YBW)! It was nice to see them both, can't remember the last time I saw them, which is exactly what Sue Bryan said as she also turned up! Sue and I teamed up and walked west along the coastal footpath to find the Yellow-browed Warbler. It didn't take too long to find really and was feeding high up in a huge Holm Oak tree, on the left side of the path and immediately next to the start of the wooden raised section of the path at 5.40pm (put news out to RBA). It wasn't looking good for a picture though. We both mused where we wanted the bird to be for a photograph – that simply wasn't going to happen! There wasn't even a chance of a record shot either – one big tree, one fast moving bird and failing light! We did hear it call every now and again. There was also a few Blue Tits in there and other birds too, but it was difficult to pin anything down in this massive tree in dire and misty light. We continued along the path in hope of finding more birds, but found very little of note – a Robin and the usual Woodpigeons. We walked beyond the huge Willows (where an Arctic Warbler was found on 24th October 2012) and couldn't find a single bird in those willows – most disappointing! On the way back a Sparrowhawk bombed through at eye level. We found very few birds, but we did have a lovely catch up! Sue was telling me what fun it is to go on one of LGRE's guided tours – I reckon I could handle the speed of flying from bird to bird, but no pennies to spare for tours or holidays, so can't see that ever being pencilled in my diary. It was almost dark when we finished chatting – lovely to see you Sue!

Went to visit my parents – what a nightmare, both of them now deaf as post. District nurse coming out to sort father's ears out this week, but mother won't do anything about hers.... impossible! Showed mother my recent pictures (copied onto iphone) and then went home.
Posted by Penny Clarke at 23:57