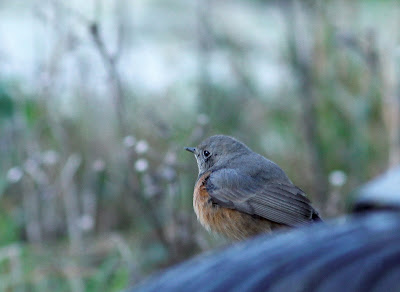 EASTERN BLACK REDSTART
Snettisham – 2nd for Norfolk
I didn't get up particularly early, but planned to go out for a walk and watch some birds somewhere locally. News came through of an Eastern Black Redstart, luckily just 'down the road' at Snettisham. Apparently it had been found yesterday (possibly), by someone else initially – maybe they had decided not to put the news out, so that birders didn't break rules and travel further than they should have been? I had been in the same spot only two days ago! I didn't fly out of the door straight away, as needed to have breakfast/lunch and all my birds needed feeding. So whilst breakfast was cooking, I topped up all the bird feeders, cut some apples up, put some dried fruit out and stale (ish) mince pies for my Blackbirds, cleaned the bird baths out and then had my breakfast.

It made a nice change for a good bird to be close by – during the entire Covid-19 period of lockdowns, tiers etc, the majority of the best birds have been too far away to even contemplate travelling to see them, eg the Desert Wheatear at Salthouse, the showy Purple Heron at Cley etc, which I would have loved to have seen, but morally wrong in the pandemic we are in. I can't remember what time I left the house in the afternoon, but when I arrived, the Eastern Black Redstart had not been seen for half an hour. It was surprising (although not unexpected to be honest) to see birders there from afar, that should not have been there, but they were and so that was that. At least everyone there this afternoon (apart from a couple) were all wearing face masks and social distancing. Don't get me wrong, it was lovely to see everyone that was there, but at the end of the day, some shouldn't have travelled that far and they know it! Note lack of photos on social media etc! There were at least 7 people that had travelled way too far for their 'daily exercise', a handful I didn't recognise and the others were all birders who lived locally and under 12 miles away.

Some people could argue that I shouldn't have been there either (11 miles away), but if I lived in a place where I could walk straight out my door into countryside and relative safety, I wouldn't even be getting in my car, seriously! One of the many reasons why I will be moving! Birders who live in countryside locations, who can walk straight out of their door to watch birds in tranquility and peace are very lucky indeed. If I walk out of my door to go birding, my only choice is along the cycle path, which is dodgy at best and because of this, I rarely bring my phone, for fear of being mugged and I more often than not get odd looks from dodgy people, when they notice I have binoculars and putting it bluntly, I don't feel safe at all and am always looking behind me etc – which I is why I drive to the nearest place where I do feel safe and where there is not an abundance of dogs – at this time of the year, the nearest place that has less dogs is Snettisham – this would obviously not be the case in warmer weather! 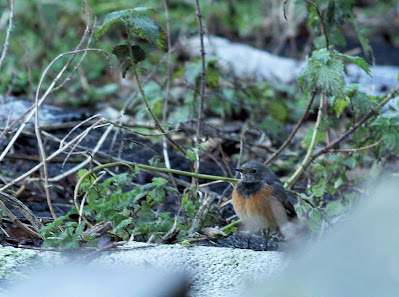 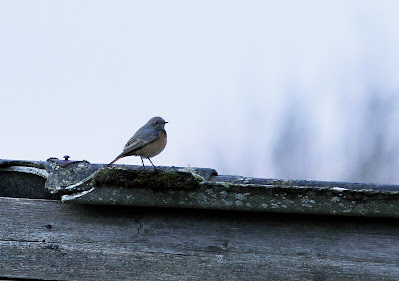 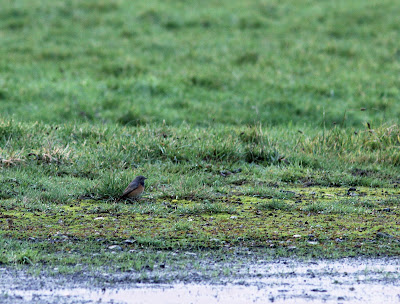 The Eastern Black Redstart did now show for ages! Meanwhile I had a nice amble round and found 4 cracking Bullfinches in a hedgerow, saw a Barn Owl, Blackbirds, Robin, Chaffinches, Great Tit and some Greylag Geese. I didn't see or hear the Yellow-browed Warbler that had been seen/heard earlier by others. Eventually the redstart reappeared in the same spot it had been last seen in, late in the day and in poor light – I had a side on view over a gate. It was flitting from the hedge to the field, where there was some pallets and tyres. I didn't see it for very long and my camera wouldn't focus properly in the poor light, but still great to see. I was freezing now, left and returned home.