BLAKENEY POINT and 'The Albatross'! 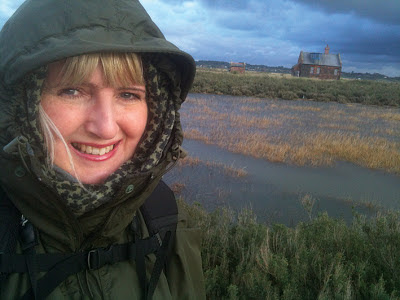 Me at Half Way House, Blakeney Point this evening.
Very High Tide – as you can see!

It was more of a social day down the 'Point' today, I saw more birders than birds – well almost!!! Rain, sun, wind, cold, more rain and little in return for all the hard work. A handful of wheatears were the highlight and was gripped off with a Snow Goose!


I had good views of the Red-backed Shrike sitting in a bramble bush by the windmill at Cley this morning. Thank you to the two birders who kindly let me look through their scopes and also had to lower them for me too! It was raining, no surprise there – at least the forecast was correct!

Parked up at Coastguards and had a coffee before my potentially, exciting walk to Blakeney Point. There had to be something today, surely? I was slightly worried when I realised that James Mcallum's  car was not in the carpark – so where was he? East Hills or was I just one step ahead of him?! I set off for the 'Point' in the rain and it all started well. Within minutes of walking I flushed 2 Grey Partridges, 2 Wood Pigeons, several Meadow Pipits, Reed Buntings and a Wheatear. I don't normally see much until I get to Half Way House, so this was surely a good sign? I had another Wheatear, a Curlew and 5 Linnets. The noise of the wind mean't that I wouldn't be able to hear calls or texts on my phone, so I checked it every once in a while. I noticed I had a text from MAG which said 'ALBATROSS off Coastguards now! Turn around and you are guaranteed to see it. Heading slowly west' – WHAT!!!!! I raced across the shingle in a mad panic to view the sea and as I was running I was thinking why didn't he phone me rather then text with info like that!!! I phoned him and soon realised he was talking about a bl**dy boat called 'Albatross' - Ha bl**dy Ha Mr Golley! He was laughing his head off as I was cursing him. Ok, I fell for that hook line and sinker!!!! I will remember this – revenge will be sweet! Maybe a call about a Little Green Bee-eater flying over Cley Church one evening – hmmm..... we'll see.

I sat and had a sandwich on the South side of Half Way House – it was very sheltered here and wonderfully warm. Got a voicemail text and when I listened, it was Connor who said 'Hello Miss Clarke, I've heard rumours that you are currently striding up Blakeney Point.........' well I wouldn't say 'striding' more like plodding. You only 'stride' up Blakeney Point when you are 18 and I'm way, way past that! Anyway Connor went on to say he was with Ben Lewis and they had seen s*d all and hoped that all the birds would be following up with me – yep so do I! So Connor and Ben were an hour ahead of me and half an hour behind me was that familiar head of red hair – James McCallum along with Ashley McElwee and Mark Golley. I rang Connor to see if he had anything since his message and he told me that the Plantation was birdless the first time they looked in, but now had a Whinchat there.

I worked hard to find something and did lots of sueda bashing. It's very difficult to flush birds alone on BP, it really helps if you are with others, but I wasn't so had to make the best of it. At 'The Plantation' it was lovely to catch up with Connor and Ben, but sadly the Whinchat had flown off east '5 minutes ago' Connor told me. Also Kieren and Leyla (probably spelt this wrong?) were also seconds behind me in arriving at the Plantation. No other birds were seen in the Plantation whilst we sat here. 5 Whimbrel flew west. Later Connor then declared he was going to walk back at 4pm and I teased him about leaving early. But I wish I had now too!

I stuck it out and stayed and sat to watch for any birds drop into the Plantation. Mark Golley phoned to say they had a Snow Goose flying fast and going west from 'Long Hills'. I raced up the dunes to the highest point whilst phoning Connor at the same time and scanned the sea from west to east several times, but no luck. Went back and sat down and continued to watch. The heavens opened and the rain was torrential. This is excellent news with east winds IF it drops birds in! Well I did have one tiny bit of excitement – a bird with a white rump shot through the sycamore and landed on the pine tree but it was on a branch that was out of my view. My heart started racing, OMG this is it! The bird then flew down into the sandy gully and my heart sank when I could see that it was clearly a male Wheatear!!!! Bother! Sitting here in the rain and now feeling seriously cold, I felt really fed-up and asked myself what the hell I was doing here! James, Ashley and Mark then turned up and James spotted a bird diving into the cover but we couldn't find it at all. We then walked to the lupins and the heavens opened again. Whilst the others tried to shelter by the shed, I nipped into the loos here to rummage through my rucksack for my emergency silk, thermal jacket to put on underneath my coat as I was seriously cold now. Wrapped my scarf round my head underneath my jacket hood and set off again. I decided to stay behind at the Plantation, whilst the others went on ahead of me, as I needed a coffee and food before walking back. I said I would catch them up, but of course I never did. The rain had now stopped momentarily. I saw the Wheatear again on the fence, but nothing else here at all. Oh, just remembered, James told me he saw a Hawfinch fly over Kelling Water Meadows this morning!

I set off back to Coastguards and saw another couple of Wheatears and also a few LBJ's who melted into sueda and just magically disappeared – so incredibly frustrating, but typical of birding on BP! The light, dramatic skies and sun setting was strikingly beautiful this evening and the very high tide which had flooded the marshes added to the magical beauty before me. I was taking a picture of Half Way House and decided it would be more interesting to add someone to it and it took several self portrait shots to get the house where I wanted it with me! Had fun trying to achieve this! Flushed another Wheatear and also a couple of Grey Partridges, but apart from more Meadow Pipits and a couple of Reed Buntings, nothing else was seen at all. Got back to Coastguards at 8.30pm.

Parked up by the Windmill and looked to see if the Red-backed Shrike was still there – no sign. I then parked at the East Bank carpark and had a coffee with ginger & pear cake (scrumptious) and then walked to 'The Serpentine' to see the Pectoral Sandpiper which of course also wasn't there! The full moon over Walsey Hills looked extra clear and bright this evening.

Hoping very much there will be something good this weekend – PLEASE!
Posted by Penny Clarke at 23:10