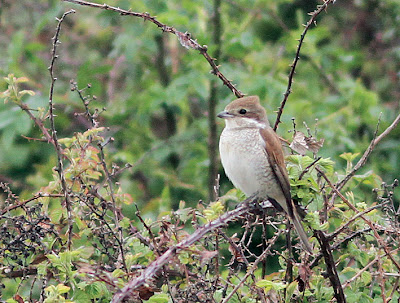 
It was forecast to be a glorious day and indeed it was, mostly. Sunny from the start until very late afternoon and then sea mist rolled in and it was freezing!

Brancaster Staithe
I wanted to find my own birds, but didn't fancy walking on shingle again! I decided to go to Brancaster Staithe. I parked the car in 'Harbour Way' on the grass verge just before the quay (free parking) and walked west along the public footpath to Brancaster and back again. This walk is very beautiful and is potentially an excellent place to find migrants. The path is raised and consists of wooden planks, as it's very wet either side and there are odd pools on route, backed by reed beds and then Brancaster golf course beyond. The hedgerows, fields and trees on the left hand side are very scenic,  and you pass the Roman Fort of Branodunum on route, it's a lovely walk. I didn't see anything too exciting but did see several Cuckoos zipping about, Whitethroats singing, Sedge and Reed Warbler. Whilst in the Roman Fort I spotted a harrier sp. flying between two trees, with very long, straight tail and looked like a Monty's, I raced out to get a clear view and it had just vanished! I really don't know where that disappeared to, I can only think it must have flown down into the reed bed. Continued my walk back. At the start of this walk is a very pretty White house with bright blue shutters and neatly mowed lawn which needed a Hoopoe to complete the picture! Also a very large tamarisk, well a hedge of tamarisk actually, lines the garden with reeds and a watery pool below. A telegraph wire goes from that house to another and the whole scene looks mediterranean – to set the scene there should have been Bee-eaters on the wires aswell! Anyway, enough dreaming – birds that were really there were a family of House Sparrows in the tamarisk, a couple of wood pigeons and on the telegraph wire, two Swallows. 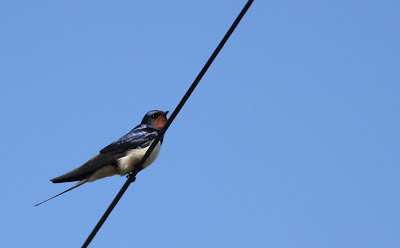 Swallow at Brancaster Staithe, where there should have been a Bee-eater!

Thornham in search of Orioles!
Parked the car on the main road just east of Thornham Farm Shop and walked along the public footpath to Jameson's wood where there is a fairly large poplar plantation. Paul Eele, Warden at Titchwell RSPB had been lucky enough to hear a Golden Oriole singing at 6.20am this morning at the reserve – I know it was more than probably just passing through, but I just had to have a quick look in this poplar plantation, just in case there was a slim chance it hadn't quite left the area yet! Nothing really of note here, there were more butterflies than birds and saw lots of Orangetips, Tortoishell, Peacock, Speckled Woods and Large Whites. A Wren was singing and saw a blackbird. The poplar wood looked exciting, but sadly wasn't.

Titchwell RSPB
Lunch outside on the picnic tables. I really don't know what quite was going on here when I arrived. I was of the understanding that the tables immediately outside the 'Feeding Station' were for food ordered from the cafe. Maybe I am completely wrong? There was a very 'posh' party of approx 15+ non birders + dogs who had bought all their own food, spread on one picnic table and singing Happy Birthday. I went to the hatch to collect my lunch and as I turned to walk back, the party had very quickly extended onto my table! I had left my cutlery and bag on the table on purpose! I soon kicked them off – 'we thought you had left' a lady said! I really don't understand why they would come to this reserve to crowd round a small table to celebrate a birthday when they could have afforded to go anywhere for their lunch! I just don't get it all! Being bl**dy minded I stayed on the table longer than I needed to!!!

Looking in the sightings book in the shop I read that someone had seen a Spotted Flycatcher today by the Dragonfly Pond – excellent news! At the pond I discovered not only one, but two Spotted Flycatchers together flitting round in the sunshine at 2pm!!! I sat in the bench for quite a well watching them – magical! Photography for a 300mm lens was rubbish though and I almost didn't bother posting the picture! I felt quite pleased to have helped a few people who were not sure on the ID's of birds they were watching. One couple were quite excited about a bird they saw moving around in a willow and said it was a song they hadn't heard before – we waited and waited and suddenly a Cettis's Warbler burst into song, the lady was especially pleased when I told her what it was. Also helped somebody else ID a Willow Warbler etc etc. Anyway, I felt really lazy and couldn't be bothered to walk along the main path in this heat. I love Titchwell reserve, but there is no shade along the main path and I'm not really a hot weather person! Plus there was a Red-backed Shrike to be seen at Holme! Spotted Flycatcher by the Dragonfly Pool, Titchwell RSPB.
Rubbish shot, best I could get! 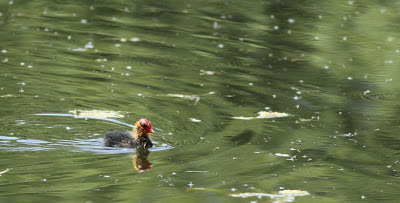 Holme NWT
Parked by the 5-bar gate half way along the Firs Road. Walked up to the NWT Forestry to view the female Red-backed Shrike. There were a few people there and this shrike seemed particularly elusive. Occasionally it would appear in a gully and then disappear again for about half an hour. It took me ages to sit it initially – a very smart bird, but impossible for my camera lens at this range. Heard a Turtle dove calling! Lots of Cuckoos around too. It was also nice to meet a couple birders who were the people seeing the 4+ Short-eared Owls earlier in the year, round the corner from my house (that I didn't see!). Hearing news about Turtle Doves being seen behind the bungalows behind the NWT pay hut,  I went to look and I did see two Turtle Doves fly across me and managed to get a 'record' shot of one sitting on a bush! I have never seen so many Cuckoos in one spot either! Also saw two Bullfinches in here, several Chiffchaffs and Whitethroats. Also a Short-eared Owl flew across the Forestry. Had a nice chat with a local birder (Mr. J) who I have known since I was a youngster – who told me he has Turtle Doves feeding on his bird table daily at the moment! I had tea and then a nap in the car. Then I went back to attempt to photograph the Red-backed Shrike, which was not successful. I tried all sorts of fieldcraft, sitting and waiting at all the birds favourite spots, creeping slowly up to the bird etc, but it wasn't having any of it, so I gave up! Basically I needed a longer lens – one day!

Went to visit my parents and show Mother my bluethroat pictures on the camera. Very, very sadly father couldn't see the pictures – he tried to look, but just told me the viewfinder looked blank. His Macular Degeneration has got so much worse – breaks my heart! On a happier note, he did chuckle though when I told him about the blackbird harrassing me at Walsey Hills which reminds me, John Furse also got harrassed today - see HERE. 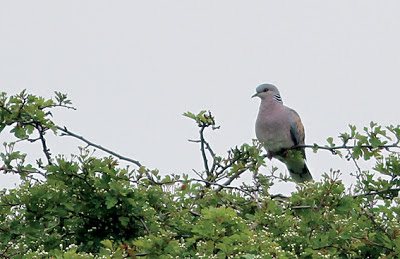 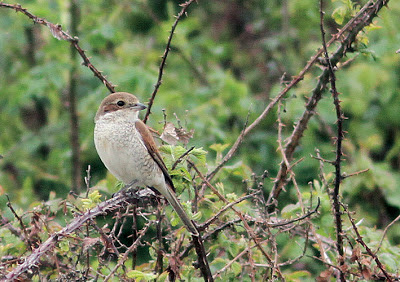 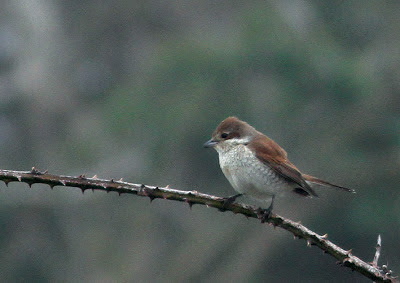 RED-BACKED SHRIKE
at Holme NWT
Rubbish photos – but best I could get today I'm afraid!
Posted by Penny Clarke at 23:03