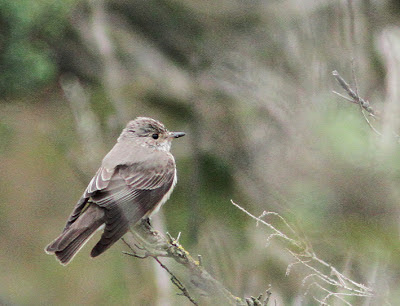 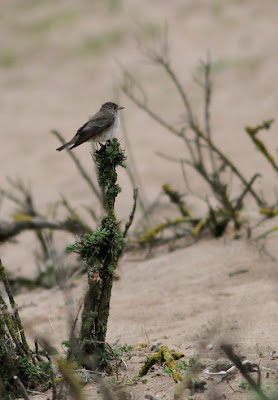 Well after receiving texts from M.A.G. about finding a Red-backed Shrike at Cley and then more at Blakeney Point and Wrynecks (lost count of how many good birds he found today!) I realised this was not the night to go shopping in Tescos! I was really tired and could have done with an early night to be honest, but there was no way I was going to miss out on finding some exciting birds. It had been raining most of the day in King's Lynn, whilst I was at work and I hadn't realised actually how foggy it was until I got nearer to the coast. There was not enough time to get to Blakeney Point, well actually there was, but there was no way I was going to Cley and walk BP with so little time to bird, unless of course someone found something mega! So I opted for Gun Hill and Burnham Overy Dunes.

After parking the car up, I couldn't even see Gun Hill through the fog! Potentially I had the chance of finding a really good bird and would have it all to myself, as I didn't see a single birder or non-birder come to that out there, the entire time I was there! I find this hard to believe that I was the only birder here, when this place is one of the hotspots for migrants dropping in! Along the hedgerows there were 2 Mistle Thrushes together in the fog. At the bushes at the end of the sea wall I found a Spotted Flycatcher in the apple tree (birders who come here regularly know which apple tree I mean!) which was a lovely surprise, but I was not able to photograph it. Further along by the brick kiln beyond Gun Hill I found a second Spotted Flycatcher!!! Now this one was more obliging, well just, before it flew off out of sight. The bushes which are usually the best ones, seaward side of Gun Hill held nothing or so I thought. I couldn't believe there was nothing in here and refused to accept this. I tried everything in the book to get a bird out of there, still nothing. I didn't give up and walked right through the small elders and 'pished' loudly and guess what a possible nightingale sp. shot out into another elder bush. I saw this bird a second time, though even briefer than the first – I worked hard to see this bird but it had no intention of giving itself up and I could not re-find it. I sat quietly and waited whilst having a coffee and it was as though there had never been a bird there at all! This was incredibly frustrating. Meanwhile more messages kept coming out of Blakeney Point: Red-backed Shrikes, Wrynecks, Icterine Warbler, Redstart, Black Redstart........

I walked back to the apple tree and found nothing new. Now, being sensible I should have walked back, but I continued on through Burnham Overy Dunes all the way to the Holkham Pines and sadly found nothing else of note. I started walking back from here at 9.15pm and felt really fed-up now. I had had the entire place to myself and I hadn't even found anything good enough to phone out to RBA! Once back on the seawall just after the bushes/apple tree a Spoonbill flew off the small pool and flew west, over me in the fog. Got back to the car at 10.10pm and I was very pleased to find that the car was actually still there! Drove home arriving back at 11pm.

Oh, I also went to look for the Eagle Owl this morning before work, but couldn't find it, but its still there this afternoon someone has reported.
Posted by Penny Clarke at 23:53