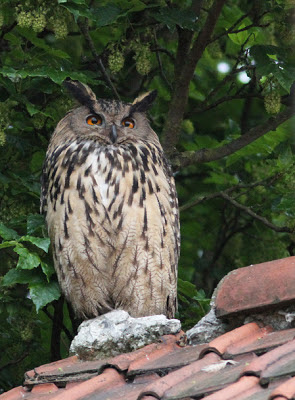 News came on the pager when I looked at lunchtime of an "escaped Eagle Owl King's Lynn on William Street". Escaped or not, made no difference to me I wanted to see this bird!

When I finished work I had to go into town first to the bank etc and then walked back to my parked car. I was sitting typing a message via iphone to the Norfolk thread on BF about this owl in response to someone writing 'bet Penny's been and checked it out....' when I felt a car back into me!!! A stupid woman driver had reversed parked her car into the space in front of me nudging my bl**dy car|!!! On inspection I couldn't see a single mark at all and couldn't believe there wasn't, so kept looking. The lady got inpatient at the time I was spending looking, to which I lost it and said 'excuse meeeeeee, you have just backed your car into mine' etc etc. I took her registration number in case I found anything later on.

Anyway off I went to look for 'William Street'. I ended up driving down 'Thomas Street' which is the narrowest street EVER and really wished I hadn't! Its a really short street aswell and almost impossible to turn round the other end. DO NOT EVEN THINK OF PARKING IN THIS STREET for the residents sake please. I asked a very helpful little girl called Katy if she knew about the owl, who then excitedly told me all about the 'big owl' with 'HUGE wings'. Another little girl called Chloe then came out and joined in with the conversation about where she had seen the owl. Katy came racing back up the street to say I could go and look at a lady's brilliant pictures that she taken. The lady's photos on her phone were indeed brilliant, much better than anything taken with an SLR I can tell you! The Eagle Owl roosts in a very large Copper Beech Tree (purple leaves) which is next to a Wall in Thomas Street. See street map HERE

Apparently its been in the local papers, RSPCA have been out and quote from someone 'they were not much help'. Baytree Garden Centre have been out and nobody can catch it. Its driving the local dogs crazy apparently according to Katy! I didn't see the owl while I was there.

Drove home and got my camera, went back and parked in Guanock Terrace (just round the corner from 'Thomas Street'). The owl still wasn't in the beech tree in Thomas Street. I walked round to William Street and looked around, whilst Chloe very kindly stood by the Beech Tree and said she would shout if it appeared, bless her.

Anyway, more and more neighbours came and out and we were all having a lovely chat – that owl bought alot of people together this evening and I met some lovely people and also two amusing young lads, one of whom declared there was a second owl that was 'four times bigger than that' – yeah right! I also heard rumours that there were two Eagle Owls in 'The Walks'!!!! Will have to investigate this!

Suddenly Chloe (I think it was) excitedly shouted 'there it is, on the roof'!!! There it was indeed sitting on the gable end of the house next to the beech tree – the house belonging to the lady who had taken the brilliant pictures. This owl was magnificant Annoyingly though much of its head and one eye was osbcured by leaves from the overhanging tree. Whilst we stood here another lady (don't know her name) showed me an incredible picture which I told her to send to the national papers – it was awesome – the Eagle Owl had been flying round that evening and landed in front of her bedroom window and looked in – she has a picture of the owl looking through the bedroom window at her – how cool is that! Some of the children asked a neighbour if we could go into her back garden to get a better view which she kindly agreed to. So we all trundled round to Claire's house and had much better views of the owl, but the light this evening was atrocious with black skies and spots of rain which didn't help photography. Claire said she was excited when the owl first appeared about six weeks ago, but the reality soon set in when she understandably feared for her 'small' cat who she has had to keep in since! Nobody seems to be assisting the people in this street to get the owl removed and actually I'm not sure if they are allowed to. No one has claimed it and they don't know quite what to do. Claire also told me that the owl had been catching and skinning hedgehogs on a regular basis!!!! Can you believe that!!! Poor hedgehogs – we don't have enough of those as it is! Now the question is, this owl is supposedly 'escaped' and it more than probably is, but Claire says she coudn't see any rings etc on the bird (I know captive ones don't always have rings) but what if it isn't, what if it actually is a wild bird? Claire seemed really pleased when I said I would try and find someone to help get the owl taken away to a more suitable residence!

I am emailing the Hawk & Owl Trust tonight for advice, as its not in an ideal situation at all. Its a very built up area and also very small children running around (joke if any of you children are reading this)!!!!! Plus its at risk of getting shot, if it takes a fancy to someone's precious dog or cat!

I would like to thank all the residents and their children for their assistance this evening. It was really lovely to meet you all. 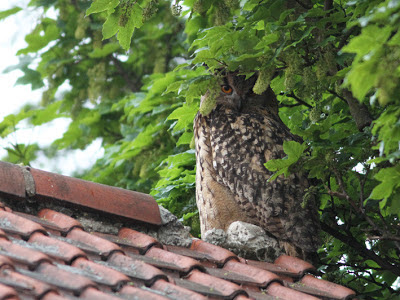 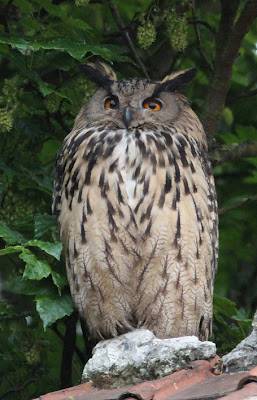 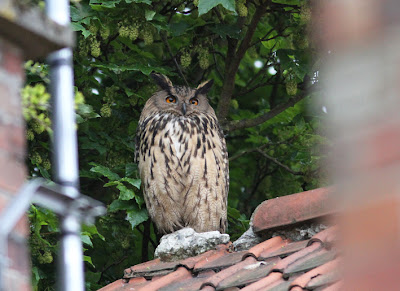 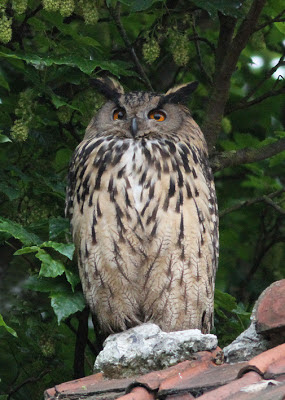 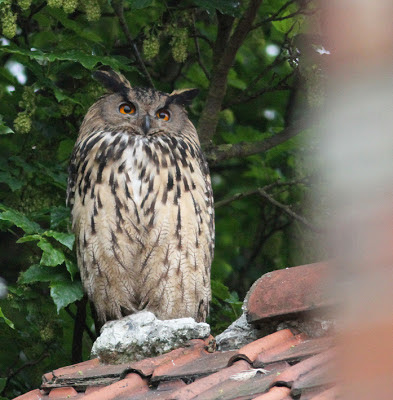 EAGLE OWL on Claire's Roof!
Posted by Penny Clarke at 22:13