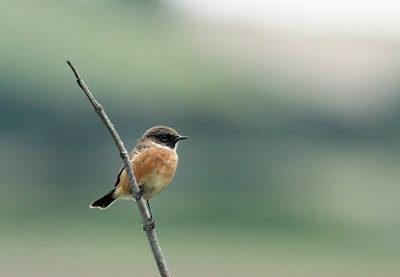 I was up and out by dawn (ish!). It had been raining all night with a North Easterly wind, but the rain how now stopped – there had be birds surely? As I drove out of my estate I heard an odd noise which sounded like a creaky/cracking sound – didn't know what it was and presumed it was something to do with the heating system, more on that later!

Arrived at the layby for Burnham Overy Dunes at 6.45am and felt excited, I was the first person here and scanning the coastal path out there, no one had yet walked in from the Burnham Overy Staithe Quay car park either! With a spring in my step to find all the goodies myself, I commenced along the track. There had obviously been an arrival of Robins, as I could hear several calling in the hedges and also Hedgesparrows. Saw a Chiffchaff in the sallows by the farm gates and stile, nothing more though in the sallows and brambles as I continued to the seawall apart from a few goldfinches. Through the gate and up onto the seawall path I saw two Reed Buntings feeding on the path and a few more on the lower path. Two Snipe flew across and the usual gulls and Redshanks were feeding in the harbour. A Marsh Harrier put everything up on the marsh including 70+ Golden Plover. Two Grey Partridges ran from the corner of the field into hiding and a very smart Wheatear appeared on the last corner before reaching the bushes at the end of the boardwalk. Several Meadow Pipits in the sueda bushes.

The bushes at the end were supposed to produce red-breasted flycatcher, greenish warbler, yellow-browed warbler, pied flycatchers and red-backed shrike perched at top at the very least in my wild (obviously) imagination!!! In reality they produced one Robin, one Whitethroat and a few Hedgesparrows – a massive let down!!! I continued west to Gun Hill. The tide was very high this morning and the marshes were flooded close to the footpath. At Gun Hill I had one Kestrel perched on the elder on the very top of the hill and one Robin in the seaward side bushes. Lots of Swallows going through west all day. That was it!!!

Trundled back to the bushes at the end of the boardwalk. Other birders now out here and met a very nice couple who read my blog and helped them to ID a bird they had seen. I then sat round by the apple tree and enjoyed my cold fried egg and vege sausage roll with coffee – scrumptious! Things started to look up when I saw a flashy red tail, flick round by the dead docks, just to the right of the apple tree – a lovely redstart which I saw again later, but it was elusive and didn't want be on my camera! It was now 9.20am and bumped into Oriole Birding's Ashley Saunders with group of birders. Whilst having a brief chat with Ashley about the state of birding today, he declared 'the big one always travels alone' – true, 'carry on regardless'!

I headed east through the dunes in my search for birds. Found at least four Wheatears and good numbers of Meadow Pipits and Hedgesparrows. In the Subalpine pit (as its know locally) I found what must have been the same Redstart I photographed the other day, but it didn't want to get on camera a second time. At the west end of the pines I sat on the high dunes and watched the elders and brambles, where I saw at least three Redstarts, a Garden Warbler, a Chiffchaff, male Blackcap and 11 Siskins flew over west. Ashley S. was sitting here with his group and had seen a flock of Siskins before I arrived, so obviously a big movement of Siskens going through (lots noted from NARVOS members recently). Chatted to another birder briefly, who said 'how's your dawn 'til dusk' going Penny? I sometimes forget when I'm out what I have written on my blog the day before! Anyway, I headed back to my car seeing very little apart from a party of Long-tailed Tits in the hedge just before I got back to the car.

My plan was to walk Blakeney Point in the afternoon, but with lack of migrants at Burnham Overy I wasn't inspired at all. Ok, there was a Red-backed Shrike at BP, but then there was one at Kelling Water Meadows too – a considerably easier walk! As I headed east along the A149 I suddenly noticed a perfect horizontal line in my windscreen, directly below the mirror. You know when you are driving along and looking at something you shouldn't be when you are driving....this line puzzled me, was it there before? Was it one of those lines you see to do with the heating system? The more I looked, the more worried I became, especially when I could then see a perfect vertical line coming down from the top of the windscreen to meet with the horizontal line and made a perfect L shape. I had to investigate properly. Pulled off the road into the middle Warham track. Got out of the car and was horrified to confirm that I had a massive L shaped crack running from the roof of the car down and across, approx one hand's length down and and two hand's length across!!! So that was what the cracking noise was I heard earlier. In all my driving years I have never had this happen to a windscreen. I wasn't aware of a stone chipping the windscreen either and in any case it would be unlikely, as I heard this cracking noise as I left my estate and wouldn't have been doing more than 20 miles an hour. My heart sunk and £ signs flashed in my mind. Phoned my Skoda garage to ask for advice and they said to bring the car in tomorrow to have a look at it – surely that must be a manufacturer's fault! Windscreen glass shouldn't do that surely?! If Skoda don't agree to sort it, it will cost me £75 excess with my insurance policy. Felt very upset that my new car had been damaged already! I know its only glass, but that isn't the point. Feeling p*ssed off, I continued to Coastguards at Cley and sat and had lunch in my car in the sunshine. I also then decided to have a long nap. 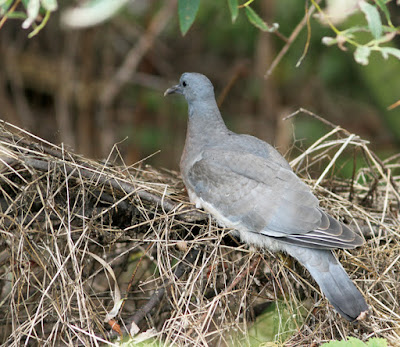 I don't know where the rest of the day disappeared to, but it did. I met up with Andy W. (also on holiday this week) and we blitzed Gramborough Hill at Salthouse. One very smart Stonechat flitted around on the brambles and barbed wire fence and three Linnets. Sat on the top of the hill for ages, willing something exciting to appear out of the bushes. 18 Curlew flew over and one Snipe. A couple of Little Egrets feeding on the marsh. Had a coffee back at my car and drove home.

Tomorrow I have wait in from 8am-1pm for a British Gas Surveyor to come out about putting the loft insulation back in (after my smoke damage) – no doubt he will turn up late rather than early, knowing my luck. Then I have to take the car to Skoda. Hope to get a bit of birding in at Titchwell RSPB later on maybe – at least I will see some birds!

MORE PHOTOGRAPHS TO BE ADDED
Posted by Penny Clarke at 23:56