I havn't left the house for two days! I was so exhausted when I eventually got to bed on Monday night that I slept in ALL morning on Tuesday!!! Typing the blog daily, work and life in general had caught up with me!

Late on Tuesday I decided to ring TalkTalk about my email not working on my iphone 6 – it didn't work properly on the iphone 5s and I presumed when my phone copied over to new one that it just took whatever bad settings it had etc across. So after spending ages copying all my 'Notes' with pen and paper (this gets deleted when you delete your email account on an iphone, take note) I deleted the email account and attempted to re-install and of course as expected, it didn't work properly. Cutting a very, very long story short, TalkTalk couldn't get to the bottom of it and suggested I ring Apple. I had a 'live' text conversation with an Apple technician for several hours and yes it kind of got solved. I learn't alot too – so basically we are all connected to a POP server or an IMAP server. An IMAP server allows you to send/receive emails on all your computers, phones etc so eg if I send an email on my phone, it shows up in my sent box on the phone and on my Macbook laptop, BUT my email account wouldn't work using IMAP, so had to go with the POP server, which now means for the first time in at least a year, I can now use the email facility normally – apart from the fact that if I send an email on my iphone, it WON'T appear on my Macbook as a sent email!!! So if I want to keep a copy of sent email on my phone, I will have email the sent mail to myself!!! Technology! I won't even tell you what time I went to bed this morning. When I tried to get to sleep I was woken up by the builders next door with machinery, banging, singing and 'boom, boom, boom' from open van door/radio in the front garden! I took so much of the music and then blew my top and asked them to turn it off, but they sneaked it back on again later, although much quieter than before, so I let it go.

I was going birding this afternoon and packed the car up all ready, but got involved in sorting lots of important jobs out and arranging appointments for things like boiler service and surveyor to survey my loft to put back the loft insulation etc etc. I received my free £500 visa card from Skoda today – fabulous!!! In any case, re birding, the rain didn't start until much later than they had forecast, so unlikely to have had that much time before dusk to see anything.

Sandwiches are done and birding gear ready by door. Dawn til dusk tomorrow – there HAS to be birds tomorrow surely after NE and rain all afternoon and evening?! Currently uploading Andrea's birthday videos on youtube!

WOW! I got a reply from Bear Grylls on Twitter today!!! See screenshot below. 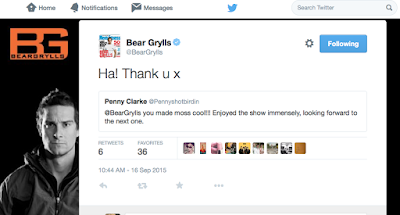