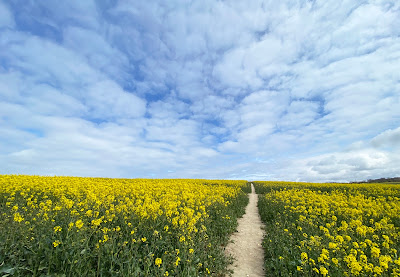 Today didn't go too well really and dipped on a couple of birds! It was also FREEZING! Even with all my thermals on. Lots of birders were complaining how much colder it was today. Anyway, it won't take long to write today's post!

Arrived at CleySpy to drop off (as arranged) the person's lens cap that I found at North Point Pools, recently and then went to Walsey Hills NOA. At last, I got to meet Warden Emma Buck! It was lovely meeting her and we chatted for a while about past and present etc and I congratulated her on the new pond, which is looking fabulous. Emma rang a Goldfinch and Greenfinch whilst I was there. No stonking male Ring Ouzels today (see yesterday's picture). Walked around Walsey Hills and didn't see anything of note really, apart from a Chiffchaff calling. Swallows were skimming over Arnold's Marsh. Bumped into Chris S., Ian and Richard along the bottom path, who very kindly told me about a very showy Grasshopper Warbler close by. 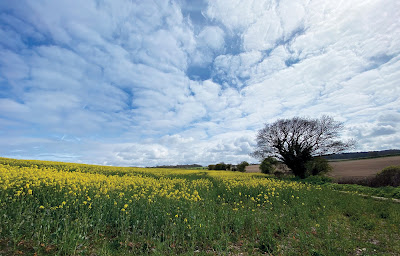 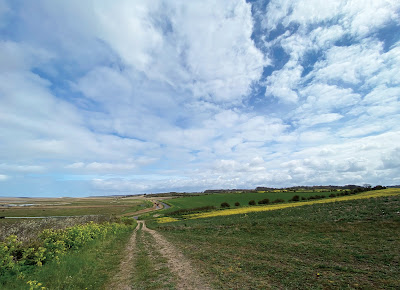 Parked up at the back of the Cley NWT Visitor Centre car park and sat in my deckchair and had some late lunch. Walked to see the Grasshopper Warbler along the NWT footpath (next to the A149) and neither sight or sound of it!!! But, to my surprise I had a Wheatear flying north across the path over the reedbed and then another seconds afterwards! Bumped into Lin P. here also, which was nice. Gave up with the Grasshopper Warbler and returned to my car. I was just going to head to Gramborough Hill, when a message appeared on the pager about a Black Redstart in Cross Street, Salthouse! Fabulous, so off I went.

In Cross Street, I saw a birder standing with scope overlooking a yard area, opposite the village hall and guessed this must be where the Black Redstart was, but decided to turn the car around first and ended spending about 5 minutes checking the top horse paddocks for Ring Ouzels – none found and then drove back down Cross Street and parked in a sensible place. I joined the man with the scope, who had kindly waited for the next birder to arrive, to point out where he had seen the Black Redstart – he showed me a lovely picture he had taken on his camera of the bird, sitting on a low wall. I fully expected to see the Black Redstart, but alas I didn't! Neither did anyone else that joined me. I searched around other gardens, walls and buildings, around the churchyard etc, as did a few others. Nothing. It was incredibly cold, so was probably sheltering in the warmest garden on offer. Robin, Blackbird, Greenfinches and Goldfinches seen here.

I left and then joined Eddie and Ian to look for birds at the scrape/pool off the Iron Road at Salthouse, where Eddie pointed out a White Wagtail, which was nice (he had three altogether after I left). Also some Ruff there too. I left and went to Beach Road, Salthouse. Sat and had a coffee and something to eat and was going to walk to Gramborough Hill, but it was so cold I couldn't be bothered.

Returned to the Cley NWT Visitor Centre car park and tried again for the Grasshopper Warbler. Initially there was only silence, then Eddie joined me and the Grasshopper Warbler starting reeling– it was very close to the path, but it didn't show! Why should I expect it be singing conveniently at the top of a stem or bramble for me to see and photograph in this bitterly cold weather! Sensibly, it was low somewhere in a small bramble!

I stopped at Morston Quay briefly, no sign of the Ring Ouzel that I saw on Friday, but the Whimbrel was still there. No other birds were feeding on the field at all, all sensibly retired for the night! Time to go home!