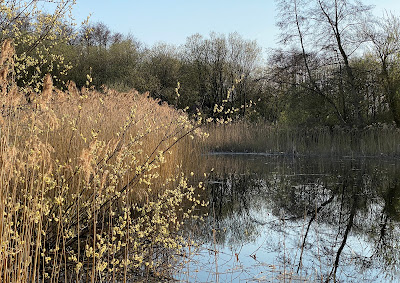 Pond along the Fen Trail at Titchwell RSPB

A glorious day at Titchwell RSPB! Arrived in the car park to hear my first Cuckoo this Spring, which was wonderful to hear. Chiffchaff singing, Blackcap, Cetti's Warbler and Reed Bunting seen. Walked along the main path to join several others birders, to wait for the White-spotted Bluethroat to appear – it didn't. I heard it singing several times and at times it was incredibly and frustratingly close, on the east side and west side of the path, a few hundred yards south of the Fen Hide. I thought I saw it for a nano second, when a Hedge Sparrow chased a bird out of a sallow, with flashes of rusty red seen in the tail, but didn't have a long enough or good enough view. Lots of Med gulls seen and continuously flying overhead. A couple of Swallows were also seen and a Sedge Warbler was singing. Lots of Brent Geese on the west side of the marsh. It was so nice to bump into lots of familiar faces today! At 12pm, I decided I had been looking at reeds for too many hours and left the scene. 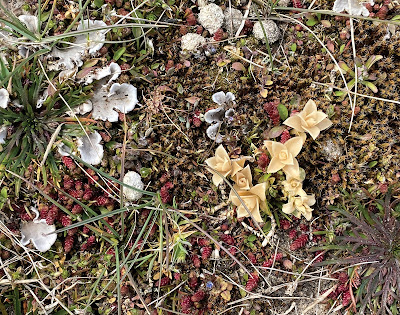 Sea Sandwort (yellow flowers) and Wall Speedwell at bottom of photo
ID'd by Phillip Amies, thanks!

Walked to the beach and west to Thornham Point. Lots of Sanderlings on the shore and Oystercatchers. Sat on my little fold up stool by the buckthorn scrub at Thornham Point, in hope of something exciting appearing on the sandy edge, but saw nothing at all. I found a very interesting and tiny plant growing in the dunes, of which I have never seen before (see above) – a quick description: little light gold stars growing amongst moss. Headed back along the beach. Two off lead dogs bounded up towards me and then ran back to a family sitting in the dunes, when they realised I wasn't interested in 'playing'. Oystercatchers disturbed on beach by a couple throwing a ball for their dog all the way along the shore, disturbing all the birds as they went. I saw several Sandwich Terns flying west along the sea.

Back along the main path at the White-spotted Bluethroat spot, I bumped into Dawn Balmer and family. Dawn's husband Pete sharply spotted a Water Vole swimming away along a dyke, which I just managed to see before it disappeared around the corner of a bank! Chinese Water Deer also seen. Still no sign of the bluethroat! Returned to the car park for a very late lunch and sat in my deckchair by the car. Moved the car to the coach turning area for an afternoon nap. Before this I saw a lovely pair of Bullfinches sitting amongst the blackthorn flowers, a Song Thrush, Blackcap, Chiffchaff and Robins. After my nap, I moved the car to the first car park. 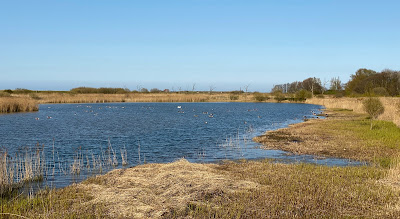 Walked around the Fen Trail and to the East Trail. Mute Swan, Tufted Ducks, Pochard, Mallards and Greylag Geese on Patsy's Pool. Walked along the path to the furthest pool and sat on the seat for a short while. Heard a Bittern booming and a Cuckoo was calling! I was hoping I might see a Ring Ouzel in the horse paddocks or maybe a Whitethroat in the hedgerow, but no luck with either. 2 Sand Martins flew over, a Heron and several Marsh Harriers were over the reedbed.

I returned to the main path and spent the rest of the evening, trying to see the White-spotted Bluethroat. Myself and others heard it singing on the west side of the path, several times, but Eddie M. was the ONLY person to see it for a nano second, before it melted away into the reeds again – lucky him! It helps being taller than me, as where Eddie was looking, I couldn't even see! Two Snipe flew over and a lots of Med Gulls calling and flying overhead. It was so cold this evening and my hands were frozen! Left at 8.05pm.