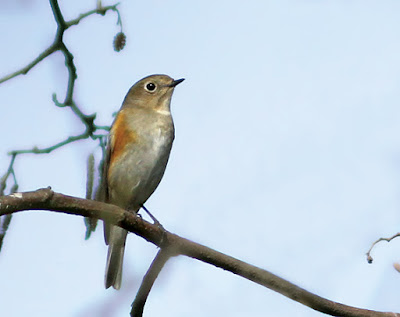 
The flamboyant Red-flanked Bluetail I saw yesterday, had worked its magic and lifted my spirits no end. My sisters and I were spending time with mother today, but we didn't get together until lunchtime, so I decided to go and see the Red-flanked Bluetail again in better light.

When I arrived in the car park at Titchwell – several people I spoke to then and throughout the morning said that they didn't think the RFB would be here this morning. I felt that it would still be here – why would it have moved on yet? It had arrived at Titchwell, presumably late afternoon and was feeding well, so why shouldn't it stay on another day to feed? I predicted that it would be depart on Monday!

No one had seen it when I arrived. I stood with others along the Meadow Trail and waited. Later, Chris Stone (as in Chris, Richard and Ian – so you Norfolk birders know who I mean) saw the bluetail fly from undergrowth on the right hand side of the boardwalk (heading towards Fen Hide, before the left turn) across the boardwalk and into scrub on the left, perching on a bramble briefly before disappearing. He was the only person to see it at this point. He then saw it again later with Richard, on the opposite side to where everyone else was, along the boardwalk just east of the main path – I had been standing with them a couple of minutes before this! Chris was obviously the man to stick with this morning!

Eventually I had a couple of brief views of this magical little bird, but with no pictures obtained whatsoever. I heard that it had landed on a close willow by the main path and the cameras had been clicking away, but I havn't seen any of those pictures on the net yet. Just before I was leaving to do the fish 'n' chip run from Eric's fish 'n' chips at Thornham, the bluetail appeared! I managed to get photos – it was distant and I was aiming the camera through branches and just hoped they would come out ok. 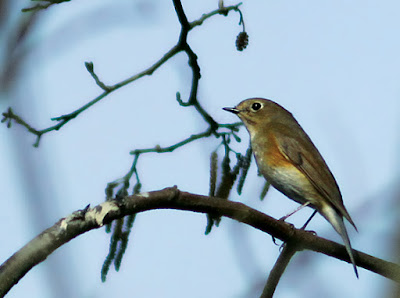 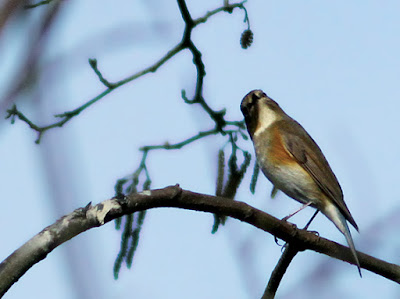 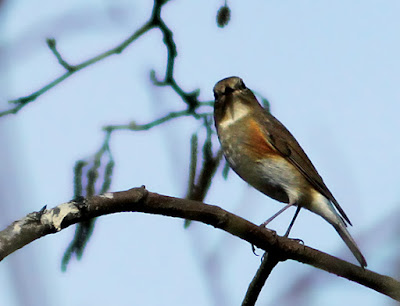 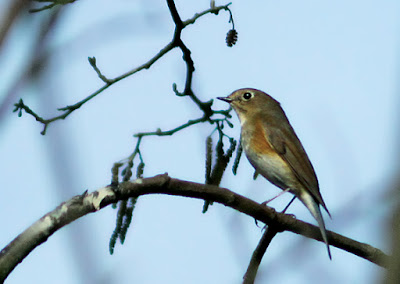 
The queue in 'Eric's' was awful and I had to wait a long time. Headed to Mother's and we all enjoyed our lunch. Mother was understandably still in a low mood and we could not persuade her to come out anywhere with us. Lucy had bought her some lovely flowers and chocolates and Vivien had bought chocolates and wildflower seeds. My present had been the bird bath (see yesterday's post) and a butter dish. There are so many condolence cards, that we had a job to find space for our Mother's day cards.

Lucy, Vivien and I went to Holme Bird Observatory to dismantle the photographic display of father, gave Sophie a thank you card and some cash donations I had been given at the funeral and then went to see Gary at the the Firs House and gave him a thank you card etc. We sat outside the Firs on one of the picnic tables for a while, it was so nice here in the sun and reflected on the wake. We also dropped in a thank you card to Robin Jolliffe, who had so kindly read out the eulogy for us.

Driving back along the Firs Road – a red car was hurtling towards us, faster than a twitcher for a Siberian Rubythroat! It was the fastest I have ever seen anyone drive down here! I did something really stupid that I now regret, especially with both my sisters in the car – it was heading towards me at such a speed, I deliberately positioned my car in the middle of the road to make him slow down and stop – this worked, but they were not very happy!!! Vivien got very angry with me and on hindsight it was pretty stupid of me – never done anything like that before! I’d have been in such trouble in life if I had been born male! I tried to ring Gary at the Firs so he could tick them off when they arrived, but couldn't get hold of him.

A few yards further up the road we bumped into Alison who was as angry as I was, about the speeding red car. Whilst we were still chatting, the red car returned, driving at the same brake neck speed past us! They needed a big fat ticket whoever they were!

Returned to mother's house and we spent time chatting about father, life and all that jazz. Mother is very sad and disappointed to learn (from another neighbour who kindly tipped us off) that the neighbour opposite with the pond, has put in planning permission for a gigantic extension with roof terrace, which will mean their new driveway/parking will be where we currently park. We can't park further back than we do, because of a soakaway drain going into the pond. As someone else commented on the planning website, its more like a rebuild, which would not be allowed in this tiny little road, with its 2 up 2 down cottages. The extension is being proposed to build over a right of way too, have the owners no brains at all! Everything about this proposal is wrong. Obviously we will be strongly objecting! We don't really need this, along with other stuff going on right now!

Vivien left to head back to Ely. Lucy and I left later, as I knew the traffic would be heavy and I can't be doing with sitting in queues of traffic! I felt exhausted when I got home and was too tired to write the blog, hence typing up the following day.
Posted by Penny Clarke at 23:55