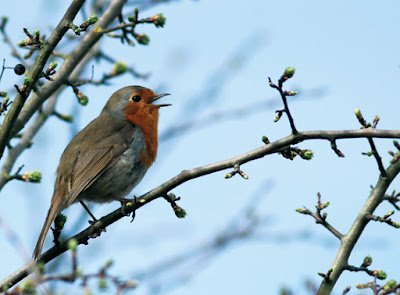 At last! I was able to persuade my mother to escape from the house this morning, in an attempt to cheer her up. She had had no sleep last night and was understandably in an irritable mood. Initially she wasn't coming out, but I put my foot down! So off we went to Holme Marsh Reserve.

It was raining when we first left, but the sun came out and everything look beautiful and Spring like. From hide one we had views of several Marsh Harriers over Holme marsh towards the NWT Firs House. A Cetti's Warbler burst into song, and a Little Grebe could be heard behind the reeds. A pair of Gadwall, some Mallards and 13 Teal were on the pool. 3 Mute Swans flew over west and a Little Egret flew over the hide. Two Crows were in the big willow and a Robin sat in a bramble. Several Chiffchaffs were also calling and a Sparrowhawk bombed through. From hide two, we had the joy of listening to a Robin serenading us (see picture above) and then it came and sat on the ledge of the hide window for a few moments! Maybe it was expecting some crumbs of cake – sadly we had none. A couple of Pied Wagtails were feeding on the mud. Good numbers of Lapwing were flying over the marsh distantly. When we walked back past hide one to leave, we heard our first Spring Blackcap in the willow!

Drove to Thornham to get fish 'n' chips from Eric's by the farm shop and forgot the bl**dy main road was closed just before the farm shop complex! So, I left mother in the car by the pull in/farm buildings and walked to the shop past the 'Road Closed' sign to get our lunch. When I returned to the car, Mother said lots of cars had turned around at the sign and looked frustrated and angry and some had done the same as me, leaving their car to walk and get their chips!

After lunch back at Holme, I took loads of stuff that Mother wanted cleared from one of the sheds to the dump at Heacham. As I was taking stuff out of the dustbin bags at the tip, I discovered father's old green 'shrimp' bag as it was called. This almost bought a tear to my eye, but there was no point in keeping it. Fond memories of us girls going shrimping with father after he finished work at the observatory – the green bag was used to carry the shrimps back. Also in the dustbin bag was his fawn coloured buckled bag that he used to put crabs in when crabbing at the wreck at Holme – this bag is made of really tough cotton and is heavy – the man helping me sort stuff at the tip, said he would put that in the 'bric-a-brac' section as they could sell that for a 'couple of quid' – I hesitated... then let it go!

In Hunstanton I did some more errands for mother and then returned to Holme. Sat with mother for a while, chatting with tea and biscuits and then left. Mother really enjoyed herself this morning, even though she was tired, I could tell it did her good and it lifted my spirits too. I'm hoping this will inspire her to get out of the house when I return to work next week.

Spent the evening taking Lucy to her concert rehearsal, buying a "Numatic Henry Dry HVR200-11 Hi-Flo Eco Bagged Vacuum Cleaner" and then picking up Lucy later on! Busy day, but stopped me thinking too much.
Posted by Penny Clarke at 23:47